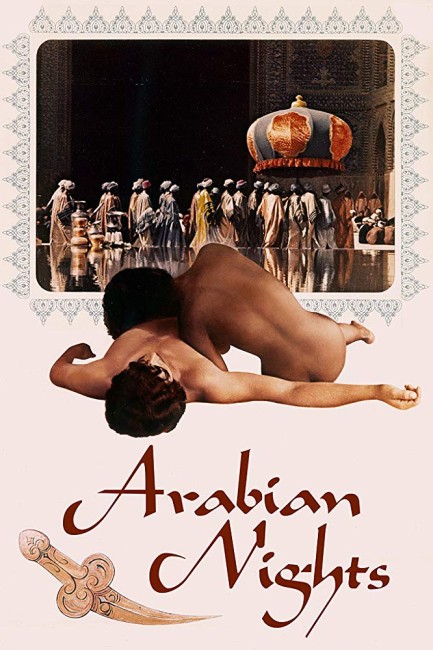 The beautiful Zumurrud is auctioned in the slave market. She is desired by all but has been given the right to choose her own master. She chooses the youth Naradun and the two become lovers. She is then abducted by a rival for her affections. Meanwhile, a passing slave caravan snatches two innocent youths where a man and a woman drug them and make a bet over which of them will be overcome with desire for the other when they wake. Zumurrud flees from her captor. Disguising herself as a man, she comes upon a city where she is made the king after a decree that a new ruler must be chosen from the first person that comes out of the desert. Naradun searches for her. During his search, he is captured and made the love slave of three women. They read him various tales. In one of these, on the day of his wedding to his cousin Aziza, Aziz is entranced by a mysterious woman. He follows the woman’s cryptic clues to become her lover but in doing so abandons Aziza’s love for him. An impoverished prince accepts a labourer’s job but comes across a trapdoor in the desert that leads to a woman who is imprisoned by a demon. When the prince is discovered there, the demon comes after him. In another story, the prince Yunan receives a prophecy to go to an island and slay the copper statue of a warrior. The island sinks and Yunan finds himself naked on another island with a boy who has been abandoned as sacrifice to a blind man who is destined to kill him. As Yunan befriends the boy, he realises that he will become the blind man who kills the boy.

Pier Paolo Pasolini was one of the most interesting post-War Italian directors. Pasolini started making films at around the same time that other Italian directors like Michelangelo Antonioni, Federico Fellini and Bernardo Bertolucci were starting to attract international acclaim. Pasolini frequently courted outrage – his first film Accatone (1961) attracted calls for its banning over the fact that it was set around the life of a pimp, although the film that gained Pasolini his first major acclaim was the more traditional The Gospel According to St Matthew (1964). Pasolini was a gay man and there is often frank sexual content and nudity in his films – he made openly sexual adaptations of literary classics like Oedipus Rex (1967), The Decameron (1971) and The Canterbury Tales (1972). Pasolini’s most controversial work was his final film Salo or 120 Days of Sodom (1975), an adaptation of a work by the Marquis de Sade, which portrays some of the most extreme torture and degradation ever committed to celluloid, although in itself is not an exploitative work. Shortly after making Salo, Pasolini was murdered by a young male prostitute he had dallied with.

Arabian Nights was another of Pier Paolo Pasolini’s sexualised reworkings of the classics. It is a striking and beautiful film. It is certainly unlike any other film version of the Arabian Nights. Most notably, Pasolini has abandoned the wraparound structure of the original tales, which every other screen adaptation has retained – of having Scheherazade as narrator, coming up with a new tale each night to entertain the sultan in order to stave off the threat of losing her head. This version is still episodic in nature but much more free-flowing. If anything it resembles the loose structure of The Saragossa Manuscript (1965), which consisted of a tapestry of tales interwoven with one another, including stories within other stories. As expected of a Pasolini film, this version is also frankly sexual, with a good deal of casual full frontal nudity from both sexes.

The most lovely of the tales is the story of Aziz who on the day of his marriage to his cousin Aziza is tempted by a mystery woman and postpones his marriage as he becomes fascinated with her beauty and enigma and keeps returning to Aziza to interpret the clues that the other woman gives him, each helping him get closer, only to ignore the longsuffering love that Aziza has for him. The episode is near perfect in its conjuration of a haunting mystery and the sense of a fairytale where notions like love are pure and absolute.

Some of the other episodes are weaker – especially the episode where the king’s son Yunan gets inspiration to go to an island and slay a copper warrior, the island sinks, he finds himself naked and alone on another island and comes across a boy in an underground vault who has been placed there for protection against the prophecy of a blind man that will slay him, only for Yunan to realise that he is the destined killer. While the set-up works, the ending feels awkward, as we are never dramatically given any particular reason why the prince suddenly turns and kills the boy.

Arabian Nights is beautifully filmed. While most other screen adaptations of the Arabian Nights and its milieu – The Thief of Bagdad (1940), The 7th Voyage of Sinbad (1958) et al – opt for a studio-bound version of Arabia that has almost become its own cliche, Pasolini prefers to go outdoors and shoot the real thing, or at least the modern-day equivalent thereof. The film was shot in an impressive range of international locales – Ethiopia, Yemen, Nepal and pre-revolution Iran – not exactly countries that are at the top of the list as destinations that filmmakers flock to. The result provides an extraordinarily naturalistic feel.

Pasolini covers both the peasantry in the market-places, the nomads of the desert and the surrounding cultural detail, as well as goes to visit a series of extraordinarily lavish palaces – it is hard to tell exactly what is location and what is a set. It is as though the film is taking place in the real Arabia, not a studio-dressed one, even at the same time as Pasolini retains a distinct fairytale atmosphere.

While Pasolini does a beautiful job charting the naturalism of his milieu, he is more awkward when it comes to the fantasy elements, which are few. The demon story has a captivating brutality to it as we see the demon casually chopping apart the woman he holds prisoner but the demon itself only looks like a man in body paint and the scenes with it flying contain some unconvincing special effects.

Pier Paolo Pasolini’s other ventures into genre material include:- Teorema (1968) about an enigmatic Christ-like visitor who overturns the lives of an upper-class family after seducing all of them; the strange and incomprehensible Porcile (1969), one story of which concerns the activities of a cannibal; Medea (1969) retelling the story of Jason and the Argonauts; and the extremely controversial Marquis de Sade adaptation Salo or 120 Days of Sodom (1975), which was banned in a number of countries. Abel Ferrara’s Pasolini is a biopic that centres around the director’s last few days featuring Willem Dafoe as Pasolini.