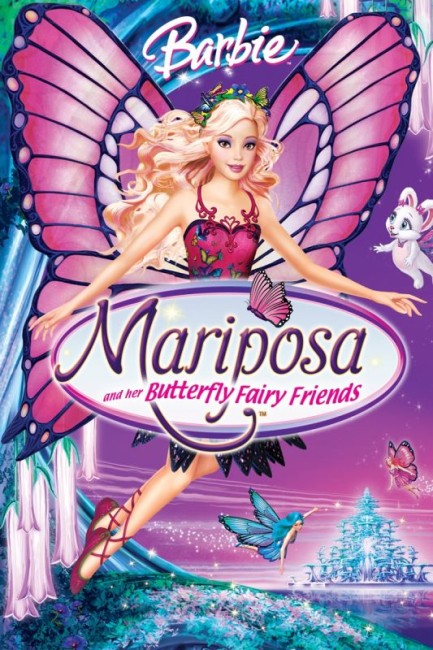 aka Barbie Mariposa and Her Butterfly Fairy Friends

Bibble is afraid to go out and so Elina tells him the story of the butterfly fairy Mariposa. Mariposa lived in the remote land of Flutterfield where the good Queen Marabella had created the fairy lights that kept away the marauding Skeezites. Mariposa served as handmaiden to the two vain sisters Rayna and Rayla. While waiting at the palace, Mariposa met Prince Carlos (unaware of his real identity) and both connected over an enjoyment of reading and the feeling they did not fit in. The conspiring royal handmaiden Henna then fed Queen Marabella some Ilious Poison. The next morning Carlos came to hide at Mariposa’s place, telling her who he was and begging her help to search for a cure to the poison, which everyone believed was only mythical. There were only two days before the poison would kill Marabella, whereupon the lights that protected Flutterfield from the Skeezites would go out. Carlos was then captured by the palace guards and imprisoned for his own protection. And so Mariposa set out on a quest to find the cure to the poison, travelling into the wide world beyond Flutterfield for the first time.

After you see one Barbie film, all the others tend to fade into a sameness. Barbie Mariposa is no different. The one plus that stands it out above some of the other Barbie films is the sheer vibrancy of the colour palette that the animators are using. Moreover, debuting director Conrad Helten, previously an animation director on the other Barbie films, directs with an enormous visual sweep that none of the other Barbie films have so far shown. Some of the scenes, like the attack by the Skeezites, are directed as they would be a live-action film. All of this lifts Barbie Mariposa somewhat – Mainframe’s animation has a constant tendency to slip into eye candy but Conrad Helten makes it move with an exciting flair.

On the minus side, there are all the usual drawbacks of the animated Barbie films. The plot is a routine adventure story that feels like it has come from a computer program designed to churn them out for these films. A minus point is also the voice cast – the character of Willa has an annoyingly whiny voice; the two sisters are played as vapid airhead party girls; while for some reason Prince Carlos and the princesses have all been voiced with foreign accents, even though the actors are the same Canadians as all the rest of the cast.

Barbie Mariposa and the Fairy Princess (2013) was a sequel.