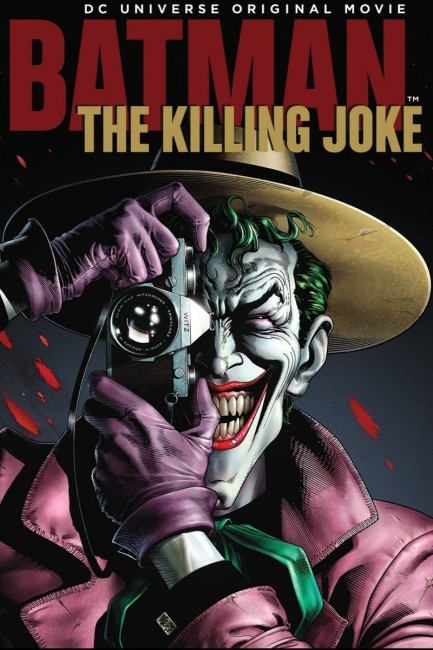 Commissioner Gordon’s daughter Barbara has become Batgirl and is struggling to keep up as a sidekick to Batman. They come up against mob boss Paris Franz who personally taunts Batgirl. Batman warns Barbara that Paris is playing with her but she thinks Batman is not taking her seriously and becomes more determined to prove herself. She also has an unfulfilled romantic longing towards Batman. One night, they give in to this and have sex but afterwards Batman proves distant and uncommunicative. She makes a decision to hang up the cape. One year later, Batman discovers that The Joker has escaped from Arkham Asylum. The Joker then turns up at Commissioner Gordon’s apartment, shooting Barbara in the stomach and abducting Commissioner Gordon. Gordon is taken to The Joker’s base in an abandoned fairground, stripped naked and psychologically tortured. As Batman comes after him, The Joker remembers back to his beginnings as a failing stand-up comic who was trying to provide for his pregnant wife and agreed to help out with a chemical factory robbery only for this to go wrong and he fall into a chemical vat.

Alan Moore’s The Killing Joke (1988) is an undisputable comic-book classic. It came just after the pivotal point when Frank Miller had written The Dark Knight Returns (1986) and Alan Moore had delivered Watchmen (1986-7), two classics that created an essential sea change in the nature of comic-books and superheroes. After this, the comic-book refashioned itself as the more artistically ambitious notion of ‘the graphic novel’, while superheroes became much darker, more fractured and psychologically complex. The notoriously cranky Moore downplayed the importance of The Killing Joke in later years saying “I don’t think it’s a very good book. It’s not saying anything very interesting.” and “It was just about a couple of licensed DC characters that didn’t really relate to the real world in any way”.

Though The Killing Joke is seen as standing outside of regular DC continuity, many aspects of it later became canon. In particular, continuity has stayed with the idea of a crippled Barbara Gordon who later turns this to her advantage as the superheroine Oracle (something we see in the post-credits coda that the film adds to the story). DC have always remained surprisingly vague about giving The Joker an origin story, which has flipped and changed over the years without any definitive one being decided on. As The Joker says here: “If I’m going to have a past, I prefer it to be multiple choice!” That said, Moore draws from The Man with the Red Hood (1951), the first of The Joker origin stories offered in Batman comics, and this seems to become the one subsequently preferred by DC writers. The subsequent Tim Burton film Batman (1989) copied the scene where The Joker falls into the toxic waste vat in substantial detail.

The Killing Joke is not without its degree of controversy. Many, including Moore himself, thought the treatment of Batgirl, wherein she is shot and left in a wheelchair, excessive. Comic-book writer Gail Simone coined the term ‘Women in Refrigerators’ (later creating a website of the same name), named after an infamous Green Lantern story in which he finds his murdered girlfriend stuffed into a refrigerator. Simone cited this and The Killing Joke‘s treatment of Batgirl, among others, as examples of the treatment of women in comics, where they are regularly murdered, tortured and raped to evoke a sense of tragedy for the hero.

Batman: The Killing Joke sees the return of producer Bruce Timm to the animated film series. Timm was the producer who started off the DC Animated Universe with the tv series Batman (1992-4), as well as the subsequent Superman (1996-2000), Batman Beyond/Batman of the Future (1999-2001) and Justice League/Justice League Unlimited (2001-5) series. Timm also produced the only other of the DC animated film to get a theatrical screening – the first of these, Batman: Mask of the Phantasm (1993) – and all of the DC Universe Original Animated Movies up to Batman: The Dark Knight Returns Part II, returning only for Justice League: Gods and Monsters. The Killing Joke not only brings Timm back to the animated Batman but also Kevin Conroy and Mark Hamill who played Batman and The Joker in the original animated series but bowed out after several of the films. The film was greenlit after Hamill made a high-profile social media claim that he would only return to voice The Joker if it was for The Killing Joke. The film gained sufficient clout that it was given a theatrical release and reviewed in mainstream media whereas all the other DC Universe Original Animated Movies have been dismissed as for children and released to video/dvd.

Most of the DC Universe Original Animated Movies end up considerably condensing the more complex multi-issue comic-book they adapt to make a 75 minute animated film; Batman: The Killing Joke goes the other way. Recognising that the original graphic novel is no more than the comic-book equivalent of a short story, the film adds an extra 30 minutes of footage at the start. This helps flesh out Batgirl who has not appeared in the DC Universe Original Animated Movies, apart from a cameo at the very end of Batman: Bad Blood, which gives the character some sympathy before we come to the tragedy of her shooting. These new scenes also lead to what has become an issue of some fan mill controversy wherein the Batman/Batgirl relationship is rewritten in terms of pupil and mentor and she given a romantic longing that becomes a surprise sex scene after which Batman acts all distant. The idea has a good many purists all up in arms but I tend to cheer the writing – it embellishes the relationship between the two characters, gives them interesting new depths. And when it comes to changes to continuity, everyone seems to forget how radical the notion of Batgirl being shot and left crippled was back in 1988.

The adaptation is exceedingly faithful. The first 30 minutes concerning Batgirl is all new material written for the film. However, starting with the scene where Batman goes to The Joker’s cell at Arkham Asylum, everything from that point is Alan Moore’s. The film adapts the comic-book script in incredibly faithful detail, right down to preserving Moore’s actual dialogue in toto and replicating the layout and details of individual panels – The Joker in Hawaiian shirt as he invades the Gordon apartment, the freaks and the grinning corpse of the property owner in the background at the circus. The only new scene that is added, aside from the epilogue, is one where The Joker drags the naked Commissioner Gordon up before a mock trial in the midst of the funhouse ride. Moore has been notoriously hostile towards film adaptations of his works over the years to the point he has refused to take screen credit on any of them but can surely have no complaint with what is done here.

To my mind, Mark Hamill is the best of all screen Jokers. The writing of the story here gives The Joker the perfect balance between madness and glee, while the flashbacks also add an element of tragic sympathy to the character. The dark brilliance of the writing mainlines the insanity of the character far more potently than all of the other film incarnations to date. Hamill has the time of his life with Alan Moore’s black dialogue, standing over the shot Barbara and making all manner of puns comparing her to a library book “There’s a hole in the jacket and the spine appears to be damaged” – while the anticlimactic ending gives us an unusually intimate glimpse into the mutual madness of the relationship between Batman and The Joker.