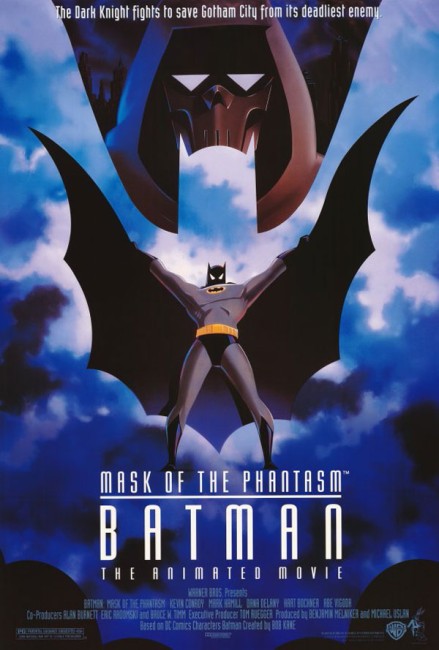 Batman is being upstaged by a new masked, possibly supernatural, avenger The Phantasm who violently dispatches various members of The Mob. A councilman who is aligned with The Mob manipulates public opinion to have Batman blamed for the crimes, causing an anti-Batman cry in the press. At the same time, Andrea Beaumont, the only woman Bruce Wayne ever loved, returns to town and he is reminded of the time when he had to decide between marrying her and developing his identity as Batman. As Bruce pursues The Phantasm, he finds its’ identity is somehow linked with Andrea’s past.

Batman (1992-4) was one of the most brilliant and innovative animated series ever made. It brought a maturity and dark complexity to the medium of kidult animation. The scripts used the Gothic psychology of their direct models, the Tim Burton films Batman (1989) and Batman Returns (1992), and the stories were stunningly dark in tone, filled with the suggestion of grim violence. These dark areas were something that animated television had simply never ventured into before. Some of the stories exploring the origins of the less well-known comic-book villains were exceptional – indeed far better than anything managed in any of Joel Schumacher’s inane live-action filmic outings in the Batman franchise, Batman Forever (1995) and Batman & Robin (1997).

Batman: Mask of the Phantasm emerged out of the success of the animated series. It was originally intended that an animated Batman feature would be made every off year to keep interest going in between the live-action films but Mask of the Phantasm was not a success – it was unceremoniously dumped into theatres by the studio right on Christmas without any build up – and this seemed to put paid to ideas of any further animated theatrical films. Bruce Timm (and others following his departure) made several other Batman animated films – Batman and Mr Freeze: Sub Zero (1997), The Batman Superman Movie: World’s Finest (1998), Batman Beyond: Return of the Joker (2000) and Batman: Mystery of the Batwoman (2003).

Not having had the privilege to see Batman: Mask of the Phantasm in a cinema, it looks not a great deal different from the average episode of the series on the small screen. Nevertheless, the elements of the series still make for something unique. The series took the Gothic look of the Tim Burton films and stylized it even further to create a world of art deco half-shadows. One of the film’s particular successes here is the World of the Future expo visited by Bruce and Andrea during the flashbacks and whose decayed ruins The Joker uses as a base of operations – it has been beautifully designed as a tarnished piece of Hugo Gernsbackian futurism that never was. The marvellously rousing Danny Elfman score that opened each episode of the series has been retuned by Shirley Walker into a stunning operatic piece with full choir, which accompanies a superb computer-animated opening cruise through the towers of Gotham City over the opening credits.

The cinematic medium allows the creative team the freedom to do some things they never could achieve on the small screen – the villains can kill people, for instance. They also create some stunning action sequences – a slow-motion shot where Bruce jumps up onto the front wheel of an oncoming motorcycle to attack the rider; the massive shootout by the police in their attempts to capture Batman; and especially the enthralling climactic fight between Batman and The Joker while careening about on a jetpack. All of this would look stunning in live-action.

Unfortunately, the script never quite comes off. The Phantasm is an interesting attempt to create an villain original to the screen but, despite some spooky atmospherics, lacks the bizarre theatricality and the distinctiveness that would place it in the domain of the comic-book canon’s other supervillains. Annoyingly, we never get any insight into what The Phantasm’s apparently supernatural powers are. Worse the character fails to do much and ends up upstaged by Mark Hamill’s maniacally-voiced Joker, who at least gets a good workout.

The film digs into the Batman mythology – we have scenes of Bruce’s search for something to scare villains, the discovery of the Batcave, the first putting on of the Bat-costume. For all that, the film’s Gothic mood never plunges deep into the moral depths of the soul the way that the Tim Burton and subsequent Christopher Nolan films and the best episodes of the animated series do. The character of Andrea Beaumont (voiced by Dana Delany, later Lois Lane in Bruce Timm and co’s animated Superman series) could have been great but, despite a good opening, she never goes places.