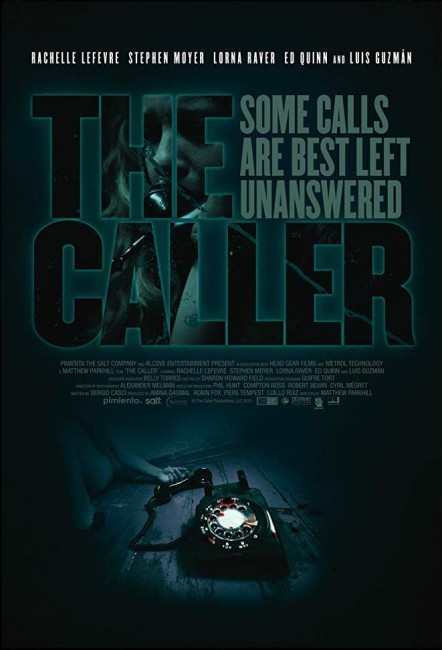 In San Juan, Puerto Rico, Mary Kee moves in to a new apartment after the divorce from her abusive husband Stephen is finalised. He ignores the restraining order and pushes in to see her, insisting that she is his. Immediately after she moves into the apartment, Mary starts to receive phone calls from a woman named Rose looking for someone. As the calls continue, Mary realises that Rose is in the 1970s. The two strike up a friendship. After she suggests to Rose that she should take matters into her own hands to deal with her abusive boyfriend, Mary is shocked to find the pantry in the apartment has disappeared and realises that Rose has killed him and buried the body in the wall. She tells Rose not to call anymore. Mary then becomes involves with night school teacher John Guidi. However, the calls from Rose continue in which she becomes more vengeful at being ignored. She then starts killing people around Mary in her time, erasing them from the timeline to all but Mary’s memory. When Mary fights back using her knowledge of events that will happen in the past, Rose retaliates by threatening Mary as a child.

The Caller – not to be confused with the fine and unrecognised The Caller (1988) concerning the psychological games between two people in a cabin in the woods – was the second directing/writing outing for British director Matthew Parkhill. Parkhill had previously made Dot the I (2003) and went on to create the tv series Rogue (2013– ) and Deep State (2018– ).

The Caller surprises one. My initial anticipation of the film was as some kind of phone-based psycho-thriller. The surprise comes in that what we have is actually a quasi-time travel film. Well, more in this case a film about cross-time communication. The closest comparison would be to Frequency (2000) with which this has many similarities in a plot involving communication between parties across eras and how the actions of one person in one period can create all manner of divergent timelines. The Caller could almost be considered a horror version of Frequency.

The film hits in with a creepy fascination from about the point that Rose draws a rose on the wall, followed by the scene where Rachelle Lefevre goes in to find that her entire pantry has disappeared and realises that the body of Rose’s abusive boyfriend has been buried in the wall. The conversation starts to become increasingly more sinister in tone. The film reaches its peak with successive twists where Rachelle Lefevre suddenly finds a severed finger buried in the garden and then that all trace of people around her existed starts being obliterated from everything except her memory. The film reaches an incredibly nasty ending where Rose has the young Rachelle on the other end of the line and is determined to maim her.

I haven’t been much impressed with Rachelle Lefevre in any of her previous roles – although maybe that was a general turnoff of anybody associated with the Twilight series. What should be said is that she and Stephen Moyer strike up a reasonable connection on screen here. The cutest line comes from Moyer regarding having the notion of cross-time communication explained to him: “I’m a Trekkie, I can handle it.”