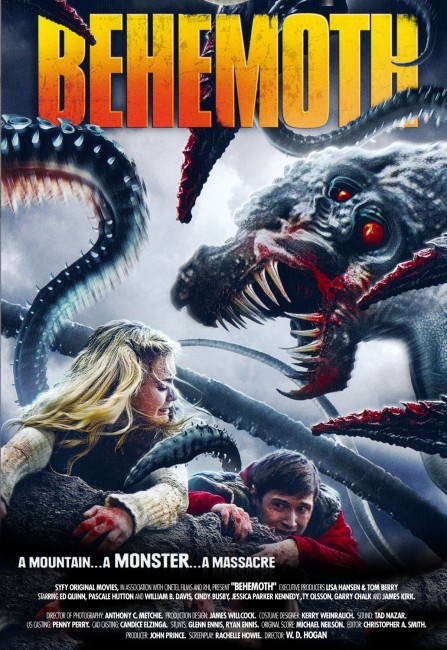 Thomas Walsh is supervising a logging operation on Mount Lincoln in the town of Ascension, Washington when the area is struck by earth tremors. Thomas meets old girlfriend, geologist Emily Allington who has come back to town to study the anomalous conditions in the area and is alarmed by the sudden increase in activity. Thomas’s aging father, a former professor, has become obsessed with Mayan theories about mythical monsters wrapped around the Earth awakening, supposedly to set the balance of nature right once again, and believes this is what is happening. As the tremors increase and the town has to be evacuated, Jack and Emily witness the great behemoth beneath the mountain coming to life.

In all regards, Behemoth is a routine Syfy Channel B movie and is made to the formula that most of the abovementioned films have well and truly set into place ‘pieces of self-contained drama featuring various members of the cast at regular intervals; cuts away to scenes of cheap CGI mass destruction. All of this plays by the numbers and with little distinction. The casts of these films are usually inhabited by B-list actors who were once famous for something. In this case, the sole recognisable name present is that of Canadian actor William B. Davis whose greatest fame came as the Cigarette Smoking Man in tv’s The X Files (1993-2002, 2016-8).

In a desire for novelty and some originality, these Syfy Channel disaster movies films are known for stretching to wilder areas of fringe theory and some decidedly dodgy and/or half-baked science in order to justify the resident catastrophic menace. What stands Behemoth out from the rest of its ilk is the outlandishness of its premise. While most of the other Syfy Channel disaster movies reach for some freak weather or geological event, this concerns itself with the mass destruction being caused by … an Ouroboros-like creature that has wrapped itself around the Earth and wakes up every few thousand years to restore the balance of nature (or something vague like that).

There are some fairly cool images of the parties in the woods seeing giant eyes opening inside the rockface of the mountain or vast tails of the creature stretching overhead seemingly forever. The main problem is when we see the creature finally emerged from the mountainside it looks like a regular monster and is easily defeated with a single missile, which seems decidedly less than the vast creature that is said to be wrapped around the entire Earth.

Behemoth was made when the supposed date that the Mayan Calendar prophesied as the end of the world was in the headlines and so there is some theorising thrown in by William B. Davis about a monster that awakens every few thousand years that is Mayan in origin. The other bizarreness is the lack of explanations offered for what the creature is – aside from William B. Davis’s hodgepodge of crackpot speculations about some kind of mythological creature taken from Mayan legends, there is nothing at all offered as to what it is doing buried in the side of a mountain.

Behemoth was the second directorial film for W.D. Hogan, a storyboard artist on a number of other high-profile films. Hogan has also made Earth’s Final Hours (2011), Independence Daysaster (2013) and Zodiac: Signs of the Apocalypse (2014) for the Syfy Channel.