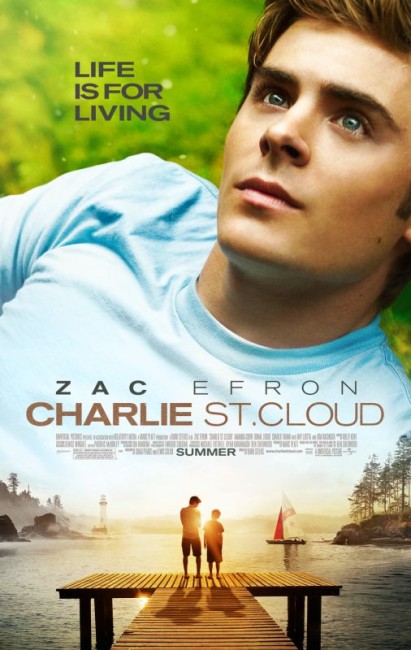 In Quincy Harbor, Washington, Charlie St. Cloud graduates high school and prepares to go to Stanford on a sailing scholarship. He promises to teach his eleven year-old brother Sam, a big baseball fan, how to play. He is driving with Sam is the passenger seat when the car is hit by a drunk driver. Charlie comes around in the ambulance but learns that Sam has died. At the funeral, a distraught Charlie finds Sam in the woods of the cemetery. He makes the promise to return every night and continue to teach Sam to play ball. Five years later and Charlie has not gone to college and is now working as the cemetery’s groundskeeper. His return from death has left him with the ability to talk to the dead in the cemetery and he meets with Sam to play ball at sundown every evening. Charlie then meets Tess Carroll, a girl from school who used to be his sailing rival, who has returned to town as she prepares to go on a solo round-the-world race. As Charlie spends time with Tess, the two fall in love and Charlie realises that this means him having to abandon his nightly appointment with Sam.

I entered the theatre for Charlie St. Cloud with star Zac Efron and director Burr Steers’ previous outing 17 Again (2009) still lodged in memory – an ageswap fantasy film that was predicated solely on Zac Efron’s pretty looks and that pitched a Chastity Movement message to the teen generation under the guise of a comedy. With its offbeat premise about a young man who works at a cemetery and plays ball with his dead brother, Charlie St. Cloud seems like an attempt to rewrite a film like Dellamorte Dellamore/Cemetery Man (1994) to the modern teenage girl crowds weaned on the mopily sensitive prettified male Gothic Chick Lit of Twilight (2008).

All the things I disliked about 17 Again seemed to be in play again as Charlie St. Cloud opened. 17 Again seemed assembled in adoration of Zac Efron who was regarded as naturally better than everybody else in the show for no reason other than that he had pretty features and near-perfect hair. Charlie St. Cloud starts the same way – though raised an ordinary working class kid, Zac Efron’s sport of preference is yachting, which in the real world is usually the exclusive sport of people with seven figure incomes. In the opening yacht race, it is passingly commented of Efron that “he’s too good,” and we learn that he is off to Stanford. The implication seems to be that Zac Efron is so handsome that he enters the game at the very top, a level entirely above any normal human being. Even when it comes to the accident, the most that Zac Efron seemed affected by it is no more than a couple of minor scratches on his pretty face and a bandage that is mostly hidden by his forelock.

However, this turns out to not quite be the case and Charlie St. Cloud succeeds in surprising. About the point that it does its leap five years to the present day, the film starts to work with a moderate conviction. Zac Efron gets a character arc that approximates something that ordinary people can relate to – he has given up his promising future to work a nowhere job just to be near his brother. Even though it is never more than a glossified fantasy where every shot seems a perfect landscape or comes with sunset duskily filtered through the trees, Charlie St. Cloud works passably well for what it sets out to be – a tearjerker for the teen demographic.

You even get the impression that Zac Efron has taken some acting lessons – he hits all the emotional beats on cue and there is even a momentous scene where he can be seen … crying. He inhabits a role with a passable assurance, while crucially the film around him engages more on the level of a story than as something that feels like it has been assembled as a series of pin-up shots. If I was twelve years old and a teenage girl, I am sure I too would be breathless and heartbroken as sensitively tearful Zac races to save the love of his life.

The main drawback of Charlie St. Cloud is the plot [PLOT SPOILERS], which essentially plays like The Sixth Sense (1999) rewritten for the Twilight generation. It may say something about the film’s cynical expectation of its audience as being dominated by those too young to have seen The Sixth Sense but the story’s big surprises are all dependent on someone not having seen that film. Zac Efron essentially plays Haley Joel Osment’s “I see dead people” character. The big surprise that we are supposed to get towards the end of the film is that Amanda Crew’s girlfriend is dead all along (although we later learn that that is not the case).

From about the time the film goes from Amanda Crew making the decision to sail into the storm and then we see her mysteriously waking up on top of her father’s grave with a cut on her head, I knew precisely where the story was heading. Once it pulls its big surprise, the film then disappointingly heads to a happy ending. The last quarter turns into something akin to Just Like Heaven (2005) about the ghost of the woman calling to a living man to rescue her before she dies, arriving at a traditional happy ending that allows the two of them to literally sail off into the sunset together.

A far more challenging story would have followed the unhappy implications that logically follow from the set-up – depicting the grief that Zac Efron would feel from realising that the girl he loves is dead too and that he has reached a position in life where the only people he has significant relationships with are dead ones. But then this is a film that is arranged more around Zac Efron nobly staring into the sunset than dealing with any complex emotions.

Burr Steers next returned to genre material with Pride and Prejudice and Zombies (2016).