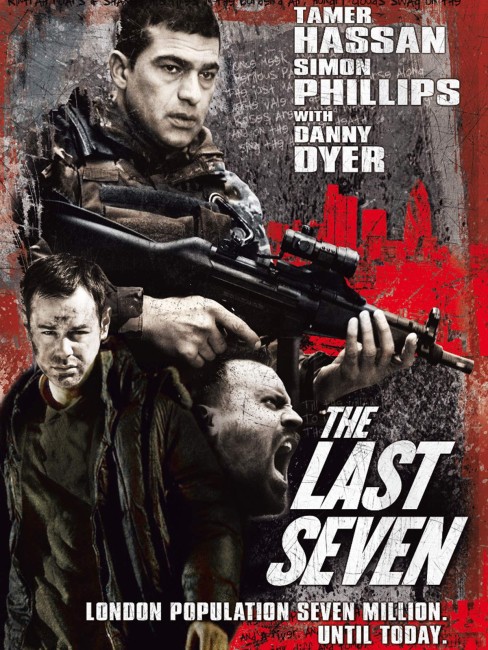 A man wakes up to find himself in a deserted London with no memory of who he is. As he walks through the city, he encounters six others. They likewise have no memory of what happened or who they are other than the i.d. in their pockets. They allow the tough military-experienced Jack Mason to lead them. As they travel, each begins to experience flashes of memory of the events leading up their being there. At the same time, something is stalking them.

The Last Seven was a directorial debut for British filmmaker Imran Naqvi who had previously worked as a Steadicam operator. Naqvi has only directed short films since then.

The Last Seven falls into a spate of Last People on Earth dramas. (A full list of these can be found under the theme Last People on Earth Films). This is a genre that goes all the way back to the post-nuclear apocalypse films of the 1950s such as Five (1951), Day the World Ended (1955), The World, The Flesh and the Devil (1958) and Last Woman on Earth (1960). The classic work on the subject was The Quiet Earth (1985) and at the time The Last Seven was made there seemed a cluster of new variants on this theme with films such as The End of the Animal (2010), Vanishing on 7th Street (2010), The Midnight After (2014) and Bokeh (2017) and especially the French Alone (2017), which shares the same twist ending. The images of London deserted also draw association to 28 Days Later (2002).

Imran Naqvi does a passable variant on the Last People on Earth drama with Simon Phillips (also the film’s producer) waking to find a deserted London and wandering the streets before eventually finding other people. The actors and script do an okay job of creating the characters and their conflicts.

Not much is done with the deserted city theme – there are none of the scenes you usually get in these films with people viewing the detritus of civilisation and delighting in doing what they want without social restraint. There is not even much where they try to puzzle out what happened. Various of the group start to disappear but Naqvi never pushes this for any scenes of horror as say the similar Vanishing on 7th Street did.