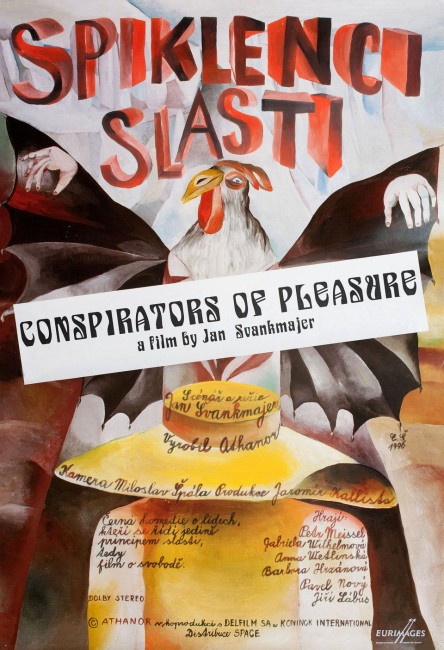 A man goes into a shop and buys a pornographic magazine. Back at his apartment, he plasters the pictures onto a papier-mâché head for a chicken suit, along with feathers from a slaughtered chicken. He then steals clothes for a dummy from his neighbour, dresses the dummy and takes out into the countryside and attacks it while dressed in the chicken suit. The neighbour meanwhile makes a straw dummy, takes it to an abandoned church, where she dresses in a mask and starts whipping it, before the dummy comes to life. At the same time, the shop owner who sold the magazine is erotically obsessed with a tv newsreader and starts to build an electronic apparatus so that he can make love to her image on the screen. The newsreader is unhappy about the time her husband spends in his shed, where he is secretly building a device that has rolling pins covered with nails, tacks, furs and brushes designed to run over his body. She however begins to discover the erotic joys of having live fish nibble her toes while on air. At the same time, a woman postal worker discovers pleasure by gouging out the interiors of loaves of bread, rolling the bread into small balls and inhaling these up her nose.

Conspirators of Pleasure was the third feature-length film from Czech animator Jan Svankmajer. Jan Svankmajer developed a cult reputation for his claymation-animated shorts made between the 1960s and 1990s. He branched into feature-length films with the mind-bogglingly bizarre Alice (1988) and then went onto the likes of Faust (1994), this, Otesanek/Little Otek (2000), Lunacy (2005), Surviving Life (2010) and Insect (2018). Svankmajer’s previous feature films up to the point of Conspirators of Pleasure were vehicles for his puppet and clay animation, all of which featured varying degrees of live-action interaction. Conspirators of Pleasure could be called Svankmajer’s first live action film. It does feature some animation, but less than a minute’s worth.

There is a charming weirdness to each character – the man who patiently constructs a headdress out of papier-mâché, pornographic pictures and chicken’s blood, ties a dummy up in the middle of nowhere and then runs about in the headdress crowing and throwing rocks at it; the man who covertly collects condoms, nails, rolling pins, brushes and fur tails before revealing his object of obsession is running rollers with the differently textured objects attached to them over his body; the woman who spends the film gouging out crusts of bread and rolling then into balls, which she then snorts up her nose and pours into her ears and goes to sleep, before rising in the morning to pour the balls all back out again; the man obsessed with a newsreader who builds a mechanized apparatus out of mannequin arms to caress his body while he slavers over her image on a tv screen; the newsreader discovering the erotic delights of having a tub of fish nibbling her toes while on air. The film ends with a weird transference where each character takes on one of the other character’s obsessions.

Conspirators of a Pleasure does feel a little conceptually stretched – it only consists of a build-up to a series of weird revelations – the feeling is more of an extended series of artily surreal shorts. It is hard though not to see Jan Svankmajer reflected in his peculiarly obsessive characters who are all furtively obsessed with giving inanimate objects semi-organic life – Svankmajer’s films are similarly filled with beds and animal skeletons come to life. Indeed, it is hard not to see the peculiar fantasies that Jan Svankmajer perpetually gives life to on screen as inhabiting the same headspace as the obsessions of the characters in the film.