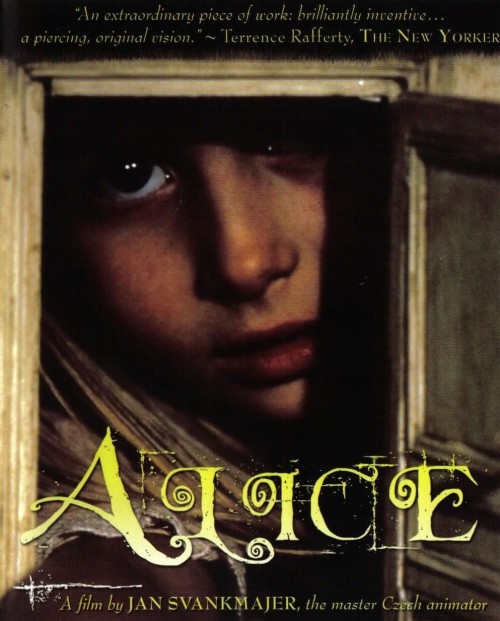 A young girl follows a stuffed rabbit that breaks out of a glass cage. It leads her on a journey through a desk and into a world filled with bizarre creatures.

Jan Svankmajer’s Alice should be more considered a creative variation on a common set of characters than an actual adaptation of the book. Out the window goes all of Carroll’s absurdist poetry; in comes a surreal slapstick. The result comes across more like a version of Eraserhead (1977) as directed by the Henson Creature Workshop than anything that Lewis Carroll ever envisioned.

The opening of the film delightfully announces itself with a pair of lips that appear on screen to say: “”I think I’ll watch a film,” said Alice to herself.” The subsequent introduction of a White Rabbit, which pulls out the nails that hold it in a specimen cage then consults the fob watch it keeps in a hole in its stomach (a hole that is constantly shedding sawdust and which, in one delightfully gross moment, starts to pour out the porridge the Rabbit eats) perfectly dissolves any perception that Alice will be another dogged travelogue through Lewis Carroll and the John Tenniel illustrations.

At the Mad Hatter’s Tea Party, a clockwork March Hare sits buttering fob watches. Elsewhere, a frog footman batters flies to death with his very lifelike giant tongue. In one absolutely delightful sequence, a miniature dormouse with a chest tied to its tail sets up camp on top of Alice’s head, nailing tent-pegs into her scalp and then starting a campfire in her hair, before she angrily bats it away.

The singularly most bizarre sequence is the pursuit of Alice by The Animals – stop-motion animated ‘things’ seemingly pieced together from animal skeletons, feathers and dolls’ clothing. Nothing seems more guaranteed to boggle the mind than the image of Alice being attacked by a miniature winged bed, or during her subsequent imprisonment in a pantry, watching skeletal baby dinosaurs pop out of eggs and loaves of bread and sprout six inch nails, or seeing a raw steak slither away of its own accord. There is little dialogue to the film – what there is is all relayed through closeups on a pair of lips.

This work of bizarre genius was the feature length debut from Czech clay animator Jan Svakmajer. Svankmajer has developed a considerable cult over the years with the numerous surrealist puppet and Claymation shorts that he has been making since the mid-1960s. Svankmajer has subsequently worked in feature-length films. His other films are the part-live action, part clay-animated Faust (1994); Conspirators of Pleasure (1996), a surrealist film about sexual fetishism; Otesanek/Little Otek (2000) about a couple who raise a wooden log as a baby; Lunacy (2005) about madmen running an insane asylum; and the photographic cutout animated Surviving Life (2010) with its bizarre conundrum of dream and reality; and Insect (2018). All of these contain the same surreal and bizarre sense of humour and feature clay animation to one degree or another.