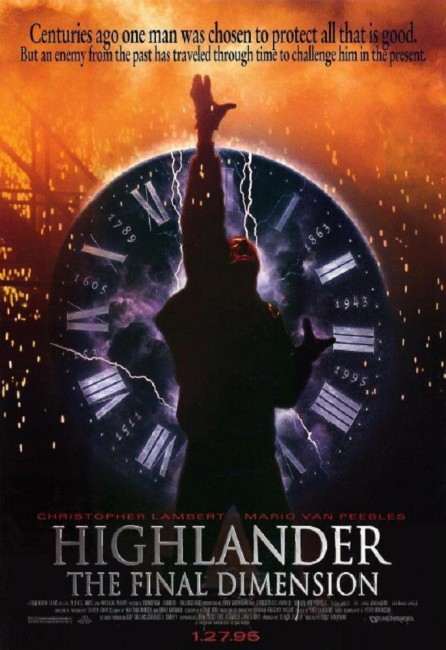 In the 16th century, Conner McLeod battles Kane, a brutal Immortal from China, and leaves him buried in a cave. In present day Japan, archaeologist Alex Johnson uncovers the cave and inadvertently revives Kane. McLeod is living in Marrakesh with his adopted son, believing he has won The Prize and that all other Immortals are dead. Kane now comes, seeking revenge against McLeod.

The highest praise that one can give Highlander III is that it is at least better than Highlander II: The Quickening (1991). Unfortunately, it is not that great either. The Highlander series is one franchise more than any other that has gotten by solely on commercial exploitation. It is a series that comes with a slim concept that just managed to stretch the distance for the first Highlander (1986) but has failed to extend any further with conviction. In all of the stories and various tv series that have been set around the Highlander concept, none have answered any of the questions that beg to be answered – Why are certain people born immortal? How come they can only be killed by decapitation? How did The Prize and The Quickening come to be? Why are churches holy ground for them?

This film is at least respectable when it comes to continuity – it follows on reasonably from what was established in the first film, unlike the second film. However, it has one major problem. A story’s duty should be to tell the most important event in a person’s life – the first Highlander built to one of the biggest events it is possible to conceive – Conner McLeod’s assumption of all knowledge in the world and the ability to influence the minds of world leaders. All the Highlander sequels and the tv series display a willful ignorance when it comes to dealing with such a plot capper and simply ignore it outright. This film also ignores the fact that Conner McLeod became mortal again at the end of the first story and now has him an Immortal once again.

The plot, at times, is just silly. Christopher Lambert is committed to the psychiatric wing of a hospital in about two seconds flat solely because a doctor can find no evident bullet wounds on his bloody chest. The trail of clues that Deborah Unger follows is incredibly specious – an obscure piece of tartan that a dead samurai is wearing leads to the McLeod clan which leads to the name Conner which leads her to New York to try and find Russell Nash – what her curiosity is that it leads her on such a crooked trail is never specified. Her character seems to be written as someone who has no purpose in the film other than to follow Christopher Lambert about – at another point, she suddenly turns up on a hillside in the Scottish highlands without any clue as to how she managed to follow him there from New York.

Andy Morahan, a British director recruited from his work on music video, has a visual slickness that helps breeze over many of the film’s other inadequacies – Highlander III is a beautifully photographed film if nothing else. However, Morahan is doing no more than papering over a slim and absurdly contrived plot. There are times when the silliness gets the better of him – like a supremely daft sequence with characters crossing swords while swinging on trapezes. The score often verges on the laughable – Gaelic ballads sit alongside rap, while the orchestral score valiantly tries to combine Japanese woodwind instruments and bagpipes at the same time.

Mario Van Peebles gives a performance that stinks to high heaven. It seems to be requisite that the villains in the Highlander films have punk hairstyles and are played completely OTT – even so, Van Peebles’ performance is incredibly bad. The character is shamelessly copied from Clancy Brown’s Kurgan in the first Highlander – he even gets his own scene driving towards other vehicles in a car without any hands and a terrified passenger.