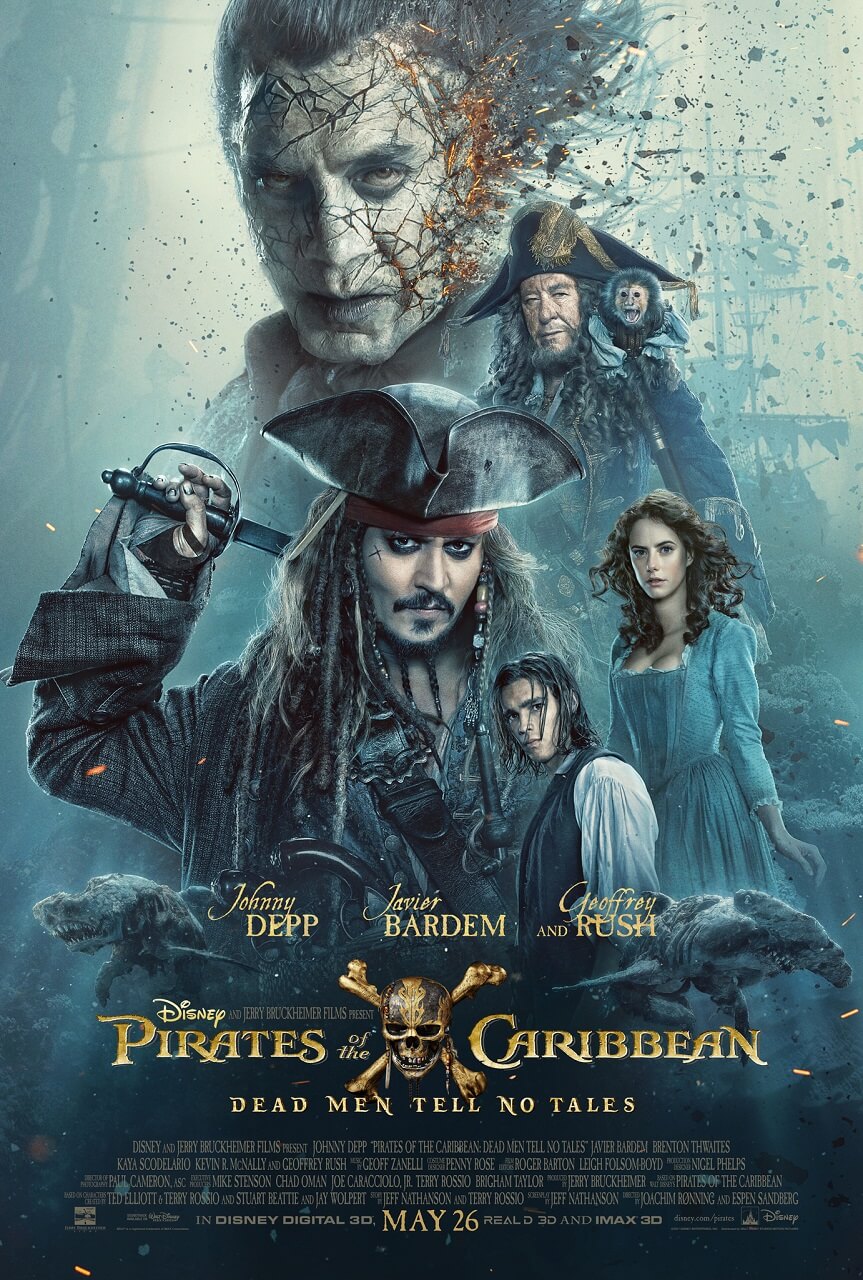 aka Pirates of the Caribbean: Salazar’s Revenge

Young Henry Turner seeks out his father Will, trapped aboard the Flying Dutchman at the bottom of the ocean. He believes he has found a means to bring Will back – by finding Neptune’s Trident – but Will tells him that is possible. Growing up into a young man, Henry is indentured aboard a British Navy ship as it heads into the Devil’s Triangle. There the crew are attacked and slaughtered by the undead Captain Salazar and his zombified crew. Salazar spares Henry and tells him to go and find Jack Sparrow whose compass is capable of releasing them. Jack is in St Martin’s but faces a crew revolt after they conduct a daring raid in which they tow an entire bank away only to find the vault is empty. A down-and-out Jack trades his compass for a drink of rum, which inadvertently frees Salazar and his crew who set sail seeking to settle scores. Jack is captured by the British Navy and sentenced to the guillotine. In the midst of this, he encounters Henry and Carina Smyth, a girl with a passion for astronomy who is accused of witchcraft, and they make an escape. Carina also has a diary with a hidden map that can lead the way to the whereabouts of Neptune’s Trident. As Salazar and his men attack every vessel they come across, Captain Barbossa gets wind of them and strikes a deal with Salazar to lead him to Jack. All parties now converge in the quest for the trident.

For me, the Pirates of the Caribbean series consisted of a sometimes amusing first film and proved enough to stretch to a second film. By the time of the third film, the series had become bloated and, given that it wasn’t even being made with a finished script, felt exactly like a very expensive ship that had lost control of its rudder and was drifting at sea without direction. Even the first three films had their moments of ridiculously over-the-top spectacle and Johnny Depp doing the eccentric Johnny Depp thing to keep them going. The fourth film felt unnecessary and moreover one where incoming director Rob Marshall, who was more used to musicals, failed to get the freewheeling comedy of the other films.

Pirates of the Caribbean: Dead Men Tell No Tales reunites Johnny Depp, Geoffrey Rush and several of the supposing crew members, while Orlando Bloom and Keira Knightley, the romantic leads of the first three films, also make cameos. The new directors this time are the Norwegian duo of Joachim Rønning and Espen Sandberg. The two had previously made the Luc Besson-produced Girl Western Bandidas (2006) and Max Manus (2008) about a Norwegian resistance fighter during WWII. However, the film that brought them to attention was the international arthouse release of Kon-Tiki (2012) based on the famous Thor Heyerdahl raft voyage.

I went into Pirates of the Caribbean: Dead Men Tell No Tales with low expectations and, as a result, enjoyed it more than I expected to. It certainly banishes the disappointment of On Stranger Tides and knows what it is doing far more than At World’s End ever did. The main problem is that it feels over-produced. It is as though Jerry Bruckheimer has reckoned that he does not have originality on his side and is dealing with the diminishing returns of a fading franchise so throws everything he can in in the production design, costuming and visual effects departments. The film overflows with visions of pirate ships, warfare in the water, grubby port towns and ripped bodices that are probably far more visually resplendent than the real thing ever was.

Johnny Depp goes through his whole schtick of tossing off a wryly sarcastic one-liner and stumbling obliviously drunk through the midst of chaos again, although there is a tiredness knowing that the only real reason he is there is because of a massive paycheque. The plot, far more than it was in the other films, is driven by magical McGuffins – Captain Jack’s compass (again), the diary with its invisible map of the stars, the quest for Neptune’s Trident (which never seems to do much when found).

On the other hand, Rønning and Sandberg do come up with some rousing sequences. Johnny Depp is introduced in a sequence where the governor of St Martin’s is about open the new supposedly impregnable bank only for Depp to be discovered inside the vault with the governor’s wife, just as his crew tow the entire bank away through the street by horse – a sequence that seems like a more elaborate version of the one in Fast Five (2011) – amidst much comic chaos and Depp being dragged along behind drinking rum. It is a sequence that sits just between overblown and amusing.

The same can also can be said for the sequence where Depp and Kaya Scodelario are about to be executed simultaneously by guillotine and hanging on opposite sides of the square, which ends in an argument between them that disrupts proceedings, only for Brenton Thwaites’ rescue attempt to go wrong and Depp to be caught on a swinging guillotine with the blade just coming up to his neck and then being spared as gravity tilts it up the other way.

Thereafter, as the main action kicks in, the film vigorously swings all the points of its plot around with dexterity. Rønning and Sandberg get in some scenes that are pure spectacle – Javier Bardem launching skeletal zombie sharks at the party and Johnny Depp naturally hooking the dinghy to one of the sharks to make an escape, before they are pursued to the beach by a horde of undead pirates that run across the top of the water; and a climactic sequence with a rift opened up in the ocean a la The Ten Commandments (1956) and the Black Pearl sailing along the edge trying to rescue the party by hauling them all up from the ocean floor on its anchor.

On the other hand, we could probably have done without a silly sequence where Johnny Depp ends up being forced to marry an ugly woman, which seems to exist solely to make fun of her for being fat, homely and having a skin condition.