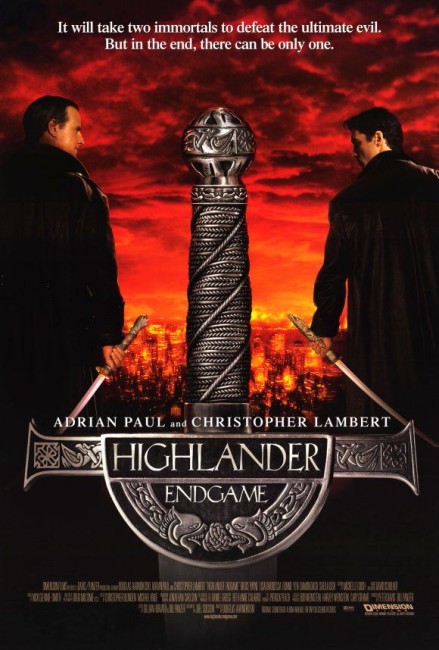 In the present day, Duncan McLeod, the descendant of Conner McLeod, deals with a new threat to Immortals – another Immortal named Jacob Kell who is killing of other Immortals and violating their rules. As a young monk, Kell was responsible for killing Conner’s mother. When Conner killed the priest that adopted Kell as a son, Kell swore vengeance against Conner. However, following Kell’s killing of his beloved Rachel Ellenstein, Conner has entered The Sanctuary, a refuge where Immortals can forswear the life of combat. Duncan searches for Conner and the two combine to fight Kell.

The first film was original but the surprise in retrospect has been that for a story that explained so little about its set-up that so much has been able to spun out from a house of cards that has essentially been built in mid-air. The most popular of the spinoffs was the Highlander tv series, which lasted for five seasons. Here Christopher Lambert was replaced by Adrian Paul playing his descendant who would decapitate a new Immortal combatant each week. In its very set up, the series wilfully overlooked the fact that by the end of the first film all other Immortals except Conner McLeod were killed off – so before the tv series even began we knew that we were dealing with a character that would die.

Highlander: Endgame looked promising. Debuting director Douglas Aarniokoski and regular genre writer/producer Joel Soisson, best known for The Prophecy (1995) and sequels, Dracula 2000 (2000) and sequels, make an interesting attempt to combine both the film and the tv series’ and bring together Christopher Lambert and Adrian Paul. There are several other small touches that makes one think that this is going to be a better Highlander than any of the other sequels with Douglas Aarniokoski bringing back Sheila Gish and Beatie Edney from the first film, as well as allowing the Silverthorn sign where the first film’s climactic duel took place to make a background appearance.

There are a number of interesting new character arcs – the contrast of Conner’s love Heather who wanted to be Immortal to be with him against Duncan’s love Kate who had immortality thrust upon her and didn’t want it. At the same time, the story throws a number of new elements into the mythology – a mysterious society known as The Watchers who guard the Immortals in an attempt to prevent the Prize from ever being won; a place called Sanctuary where Immortals can drop out of the fight; the idea that people can become Immortal if they meet a violent death.

Frustratingly though, Highlander: Endgame throws any sense of continuity in the series to the wind. One had long since given up any hope that the Highlander films would offer any explanation as to what is going on – the opening narration here even pushes it under the carpet with a “But our true origins are unknown, lost in the dawn of time.” Trying to make sense of Highlander: Endgame in relation to any of the other Highlander films only results in a headache – the first film ended with Conner McLeod winning The Prize and all other Immortals dead but this has a mysterious group whose secret purpose is to try and postpone the winning of The Prize by keeping several Immortals alive in secret; this film blows up the antique shop and Conner’s aging love/assistant that were still extant at the end of the first film and the third and has Conner go into exile for ten years. You can try and rationalise it by saying that Highlander: Endgame takes place prior to Highlander but for one glaring fact [PLOT SPOILERS] – Conner McLeod is killed off at the end of this film. This means that the end of the first film, which had him winning The Prize and the last Immortal alive, is either completely false or that this film takes place in some alternate world.

It is the absurdity of the continuity in the Highlander franchise – Highlander II trying to explain that everybody was aliens; Highlander III turning up more Immortals despite all of them being killed off; the Highlander tv series kind of hoping that we wouldn’t notice that its lead character would end up being killed off; and the entirely incomprehensible Highlander: The Animated Series – that makes it such a conceptually puerile franchise, one where the desire to generate more numeric title exploitation has no respect for story or anything else. One earnestly hoped that the series’ producers would keep the promise held in the advertising byline – “the explosive final chapter” – and retires the series after this point. It has become such a mishmash that it no longer makes any sense. Alas, we had to suffer two further films.

Certainly, the killing off of Christopher Lambert is a daring move and makes a certain commercial sense if the series is to continue. Lambert is visibly greying and a lot more lined, something that makes his claim to immortality slightly credulous. Adrian Paul is younger, more handsome and above all a better actor. The story pushes Christopher Lambert to the background for the most part and gives the lion’s share of the action to the younger Adrian Paul. Notedly, it is he that gets the love scenes this time around, not Christopher Lambert. Certainly, if the series is going to continue, Adrian Paul is the more welcome choice to carry it.

The one in the cast that seems to be having the most fun is Bruce Payne. Traditionally, Highlander villains give performances that go completely over-the-top and well into the stratosphere. Payne contrarily gives a performance where he enunciates every syllable with relish and dramatic weight, resulting in a performance that is entirely captivating whenever he is on screen. Unfortunately, he is also the most lightweight of the villains – despite the film’s attempt to make him into an uber-villain, he never does anything that other Highlander villains haven’t, killing off the good Immortals. He gets the least screen time and the actual climactic showdown is wimpy.

Douglas Aarniokoski was a former assistant director on various films, working on a number of Robert Rodriguez films. He subsequently went onto direct the horror film Animals (2008), the post-holocaust survival film The Day (2011) and the hilariously trashy horror film Nurse 3-D (2013). More recently, Aarniokoski has worked as a tv director and as a producer on genre shows such as Sleepy Hollow (2013-7), Limitless (2015-6) and Star Trek: Picard (2020– ).