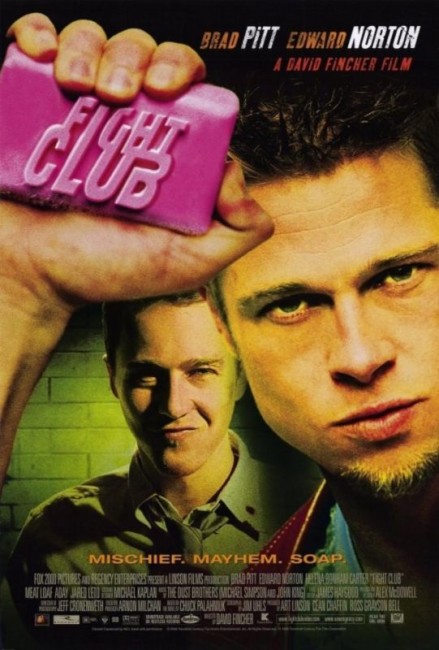 Jack is a white collar worker who processes accident reports for a major automobile company. He suffers from insomnia, haunted by emptiness of his life, which he sees as dominated by infomercials and compulsive catalogue shopping. Jack finds an outlet for this by pretending to be a sufferer at support groups for various terminal diseases, but this is ruined when another fraud Marla Singer starts turning up to same meetings he does. On a plane flight, Jack meets Tyler Durden, a manufacturer of homemade soap, who espouses a radical philosophy of anti-materialism. After his apartment is destroyed in an explosion, Jack moves into the ruined house where Tyler lives. Outside a bar, Tyler asks Jack to hit him, wanting him to feel real pain again, and the two start fighting. Others ask to join in and the two start Fight Club, a weekly meeting in the bar basement where contestants can pummel one another in hand-to-hand combat, something that rapidly takes on with disenchanted males and develops a secret cult across the entire country. Jack then discovers that Tyler is building an army of Fight Club recruits and encouraging them into increasingly more anarchist acts designed to destroy consumer society. As he tries to stop Tyler’s plan, Jack finds people insisting that he is Tyler.

Fight Club is one of those films that polarise audiences between either loving it or hating it. It is either, as a number of kneejerk critics called it when it came out, a celebration of macho thuggishness and adolescent anti-authoritarianism, or else a sharply penetrating manifesto to reclaim male identity from beneath its burial by consumer society. Fight Club is all of these things, yet it also confounds them too. It is a film of contradictions. What one predicted at the time they wrote this review (and something that has since come true) is that it would become a cult film and ten years on it has become recognised as the classic it is.

What amazes one about Fight Club is that it is surely the only studio-backed film with a $60 million + budget ever made that has an openly anarchist agenda. When it is not outrightly espousing a radically anti-materialist, red-blooded individualist manifesto with Brad Pitt as its mouthpiece, it comes filled with the wonderfully cathartic pleasures of blowing up works of corporate art and franchise coffee shops, or seeing Brad Pitt splicing frames of naked penises into family movies and urinating into the soup in high-class restaurants. The film climaxes with the outrightly anarchist fantasy of Brad Pitt blowing up all credit cards companies.

Fight Club came out at a time when there was a serious movement to reclaim a sense of masculine identity that saw men’s problems as the failings of a corrupt set of societal values in need of symbolic tearing down. One week before Fight Club opened saw the premiere of the critically acclaimed American Beauty (1999), which, with almost identical thematicality, featured an American man rebelling against his job and middle-class values. The same week that Fight Club premiered also saw the publication of Susan Faluddi’s Stiffed: The Betrayal of the American Male (1999), which espoused almost identical sentiments from a feminist perspective – the question of the increasing sense of male disempowerment. If nothing else, one need only look at the incredible popularity of The Promise Keepers.

Fight Club is a bizarrely schizoid film. It comes steeped in ironies. For all its anti-consumerist message, the studio, seemingly oblivious to the irony of such, mounted a slick high-sell marketing campaign designed to suggest a sophisticated cool. And despite ranting at length against meaningless consumer consumption for its own sake, the film employs a slick arsenal of MTV stylism to package its message with director David Fincer delivering a tour-de-force of stylistic flourishes. You cannot help but regard a film that employs the very things it urges us to tear down to sell itself as being ever so slightly dubious.

The most peculiarly schizoid part is the plot itself. Fight Club seems like a film with not just one but three competing plots. There is the initial, ostensible one – the one that is sold to the public – about a man who has lost his sense of being in a consumer society regaining the ability to feel again by engaging in fisticuffs with other men; there is another about a charismatic individual espousing an anarchist manifesto and beginning an organised revolution to try and bring down bring down consumer society.

The third plot (and the reason for its inclusion as fantasy) – [PLOT SPOILERS] – is the revelation that Brad Pitt is a split personality that exists only inside Edward Norton’s head, perhaps born of insomnia and his sense of the emptiness of modern life. This is not dissimilar to the big surprise in The Sixth Sense (1999), which came out around the same time – but rather than the ‘wow’ Sixth Sense produced on the part of the audience in overturning their assumptions about the nature of the central character, the surprise revelation here produces a collective ‘huh’ and sense of puzzlement on the part of Fight Club‘s audience.

The plot is filled with contradictions that only make sense when one views Fight Club as a fantasy. The film sets Fight Clubs up as a metaphorical outlet for disenfranchised men to reclaim a sense of individuality but then fails to question one individual turning these people into an unquestioning, unthinking army in the latter half of the film. The effect is kind of akin to the scene in Monty Python’s The Life of Brian (1979) with the group of people chanting “We are all individuals” in unison. Similarly, the bulk of the film has Brad Pitt preaching masculine reclamation and rehearsing an anarchist revolution, something the script clearly sides with in its frequent pontificating on the subject, but it then reveals Brad as a figment of Edward Norton’s unstable imagination. The climax manages to both have its cake and eat it in gleefully celebrating the bombing of credit card companies and at the same time engaging our sympathies in Edward Norton’s attempts to stop his alter ego from doing so.

What many people seemed to neglect in their slamming Fight Club for its macho brutality, its irresponsible philosophy and bizarre plotting is that it is incredibly funny. There is a wicked sense of black humour running throughout the script, particularly during the first half. The images of Edward Norton and Helena Bonham Carter standing in a laundry fighting over who gets to go to the blood parasites and colon cancer support groups is hysterical; or the cancer victim who takes over the support group to beg to get laid for one last time.

For all its contradictions, Fight Club is a great film. The fact that it uses the very packaging it decries to sell itself is less important than that it has managed to sneak out with its message intact despite the studio system. Its espousal of an anarchist manifesto and apparent contradiction at the end matters less than that it is a film with much to say and a number of dynamic ways of doing so. (The measure of such is surely that when I emerged from the screening, my date wanted to go shopping at a department store sale. The effect, upon my part, wandering through was not one of interest in bargains or novelties but the sense of the meaningless consumerism-for-consumerism’s sake that was arrayed before one). And for all the vicariousness of the film’s extending its middle finger to the establishment and revelling in the pleasures of men beating one another senseless that alternately turned audiences either on or off, Fight Club does have some serious points to make about the anaesthetising effect of mass consumption society.

Fight Club confirmed David Fincher as one of the most exciting and interesting directors of the 1990s and 00s. Fincher had emerged out of MTV and made his feature-length debut with Alien3 (1992), before going onto the dazzling serial killer thriller Se7en (1995). Fincher has also made The Game (1997), a disappointingly contrived thriller about reality games; the underrated non-genre thriller Panic Room (2002); the excellent true-life serial killer film Zodiac (2007); The Curious Case of Benjamin Button (2008) about a man who ages backwards; The Social Network (2010) about the creation of Facebook; the English-language remake of The Girl with the Dragon Tattoo (2011); the thriller Gone Girl (2014); and the true-life Mank (2020) about Hollywood screenwriter Joseph Mankiewicz; as well as producing the tv series Mindhunter (2017-9) about the establishment of the FBI’s Behavioural Science Unit.

Fight Club also brought to popular attention writer Chuck Palahniuk whose 1996 book the film is based on. Palahniuk has written a number of darkly subversive works about the bizarreness of modern society. The one other Chuck Palahniuk work adapted to screen has been Choke (2008), set around sex addiction workshops and concerning a man who pretends to choke in restaurants in order to play upon people’s sympathies and gain money for his mother’s hospital bills.