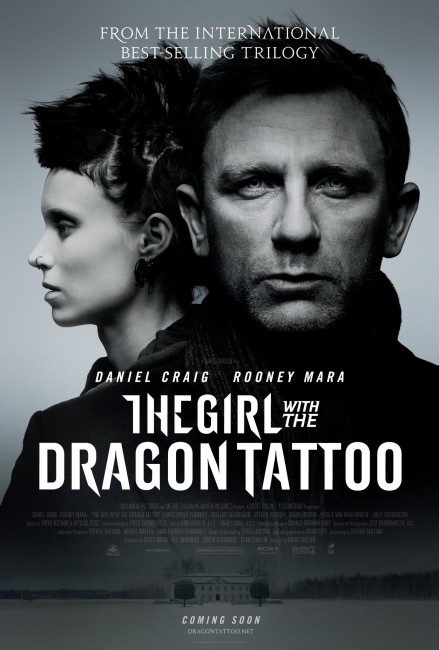 In Stockholm, Mikael Blomkvist, the editor of Millennium magazine, loses a libel lawsuit against a businessman that he wrote an expose about, due to using information that later turned out to be false. Financially ruined and forced to quit the magazine, Mikael accepts a job offer from Henrik Vanger, a wealthy retired industrialist who lives on a family island in the north of Sweden. Henrik employs Mikael to ostensibly write a biography of him but in actuality to investigate and find which of the family members killed his niece Harriet who mysteriously disappeared as a teenager in 1964. Henrik warns that the Vanger family has a dark past, including members who were Nazis during the War. Mikael requests an assistant and is referred to Lisbeth Salander, the hacker who was employed to conduct the background check on him. Lisbeth has a troubled past but she and Mikael strike up a friendship and eventually become lovers. Their investigation begins to uncover that a member of the Vanger family appears to be a serial killer responsible for the murders of numerous women over the years.

This English language remake was announced only a matter of days after The Girl with the Dragon Tattoo‘s US premiere. The surprise about it was the director assigned with David Fincher, which immediately propelled the remake to a highly anticipated A-list work. Fincher emerged out of MTV and made his feature-length debut with Alien3 (1992), before going onto the dazzling serial killer thriller Se7en (1995); The Game (1997), a thriller about reality-bending games; Fight Club (1999), a work of cult brilliance with an openly anarchist manifesto; the thriller Panic Room (2002); Zodiac (2007) about the investigation into an unsolved true-life serial killer case; The Curious Case of Benjamin Button (2008) about a man who ages backwards; The Social Network (2010) about the creation of Facebook; and subsequent to this the thriller Gone Girl (2014); as well as producing the tv series Mindhunter (2017– ) about the establishment of the FBI’s Behavioural Science Unit. These works have propelled David Fincher to the forefront of US directors as both someone with an impeccable, even obsessive grasp of cinematic technology, as well as a preference for frequently dark subject matter and material that is intelligently non-formulaic.

Hollywood has a bad habit of remaking foreign language films, usually translating them from foreign locales to US shores with familiar name casts – see the likes of Point of No Return (1993), The Vanishing (1993), Diabolique (1996), Nightwatch (1998), Just Visiting (2001), The Shaft (2001), Vanilla Sky (2001), Insomnia (2002), The Departed (2006), Funny Games U.S. (2007), Bangkok Dangerous (2008), Let Me In (2010), 13 (2010), Silent House (2011), Contraband (2012), Pusher (2012) and Brick Mansions (2014), not to mention the spate of Asian horror remakes that began with The Ring (2002). Most of these seem predicated on the assumption that American audiences are either so opposed to the idea of films that take place in other countries or are unable to read subtitles, forcing everything to have to be rendered in familiar terms they can understand. In almost every single case, the merit of some of the remakes notwithstanding, the originals are far superior, far fresher and more original works and the remakes fail to find what made them so special the first time around.

The Girl with the Dragon Tattoo 2011 has you in two minds. On one hand, The Girl with the Dragon Tattoo 2009 did everything so well, was so near perfect as a story that it is hard to think how you could improve on it. Noomi Rapace nailed the role of Lisbeth Salander so distinctively that it is almost impossible to conceive of anybody else inhabiting the part. On the other hand, there is David Fincher – a director with exceeding smarts and style to spare.

As it unfolds, it becomes apparent that the secrecy that Columbia made such a big deal about in the lead-up to the film’s release is only that The Girl with the Dragon Tattoo 2011 follows the original almost scene for scene. There are some very minor changes made in Steven Zaillian’s script – Mikael Blomkvist is not sentenced to jail for libel in this version and his past about having been babysat by Harriet is eliminated; Henrik is hospitalised part way through the film; there is the addition of two scenes where Henrik and Martin Vanger step in and offer to financially support the ailing Millennium magazine; there are slightly fewer clues followed in the trail of the investigation; the plot strand about Lisbeth continuing to monitor Mikael’s laptop after the investigation and then revealing herself by sending a hint about the Bible verses is dropped and it is Mikael’s teenage daughter (who has a more prominent role in this film) who suggests the verses; and there is a more complicated revelation of what happened to Harriet at the end with the individual in question being introduced several times before the denouement. The ending here also offers far more protracted detail of the way in which Lisbeth takes revenge on Wenneström.

David Fincher follows the original in such close detail that as you sit watching the film, you eventually realise that the remake has been made for people who had not seen the original. For anyone who has, this version is such a clone copy (but for the substitution of English language dialogue and a name cast) that the experience is less one of reinterpretation than of deja vu, especially given that it had been only a year since most English language audiences saw the original film in arthouse release. With a film that follows the original so closely, even down to mimicking similar set arrangements and camera set-ups, it almost impossible to say whether the remake works effectively as its own entity because you are not following its twists and turns as fresh and for the first time, merely watching them be repeated.

David Fincher is a lover of detective stories – see his obsession with the Zodiac Killer case in Zodiac, which is no less than a big-budget dramatisation of an amateur investigation – and naturally the scenes in the remake involving the investigation of the mystery gain much more life in his hands than they did in Niels Arden Oplev’s. Also the scene where we meet the serial killer of the show who sits down to have a conversation with Daniel Craig tied up in their cellar is a wonderfully chill set-piece where the actor in question gives a finely understated performance.

At other times, David Fincher’s misses the beats of the first film altogether – the discovery of Harriet’s fate at the end fails to hold the same emotional uplift it did in the original, while the epilogue drags out the detailing of Lisbeth’s revenge on Wenneström and takes an appallingly miscalculated turn into sentimentality showing Lisbeth suddenly developing feelings for Mikael.

The crucial element that hangs over the two films is the casting. Daniel Craig makes a passable replacement for Michael Nyqvist, although ultimately he is much more dour in the role whereas Nyqvist had an undeniable charisma and warmth. The crucial role in the film is that of Lisbeth where Rooney Mara, previously the girlfriend who jilted Mark Zuckerberg in Fincher’s The Social Network, won the part in a hot contest among rising Hollywood names. It is certainly a breakout performance for Mara who less than a year ago was being slumped around as yet another anonymous twentysomething face in formula hackwork like A Nightmare on Elm Street (2010).

Rooney Mara does a fine job, drifting through the film with a haunted avoidance of social contact, answering every exchange with a terse coldness and opening up to show strength in her scenes with Yorick van Wageningen. It is all we expect from the performance – except that, while good, it pales up against Noomi Rapace. Noomi Rapace is 5’4″ in height but seemed much more angular and taller, while the 5’3″ Rooney Mara somehow seems a good foot shorter and to hold far less physical presence. The crucial difference between the two performances is that Noomi Rapace stalked through The Girl with the Dragon Tattoo 2009 with the predatory lethality of a tiger, while Rooney Mara seems frightened and anti-social to the point that she almost seems to want to disappear into the woodwork.

With Noomi Rapace having gone onto roles in other English-language productions, including a throwaway performance in the otherwise fine Sherlock Holmes: A Game of Shadows (2011) and more substantial but noticeably more ordinary one in Prometheus (2012), you cannot help but question why the producers of the remake simply didn’t recast her here. Indeed, the original has it over the remake so much in terms of the casting, you wonder why they needed to recast the film at all. The same question could be asked of the original – why remake it when the original did everything so perfectly? Technically polished as everything here is, The Girl with the Dragon Tattoo 2011 never surmounts the old adage that things usually work best the first time around.

A sequel was made with The Girl in the Spider’s Web (2018) based on one of the original Lisbeth Salander follow-up novels by David Lagercrantz, which was filmed with Claire Foy as Lisbeth and produced by David Fincher but is a genuinely terrible film that turns everything into an overblown action thriller. The Girl with the Dragon Tattoo was parodied in 30 Nights of Paranormal Activity with the Devil Inside the Girl with the Dragon Tattoo (2013).

(Winner for Best Actress (Rooney Mara) at this site’s Best of 2011 Awards).