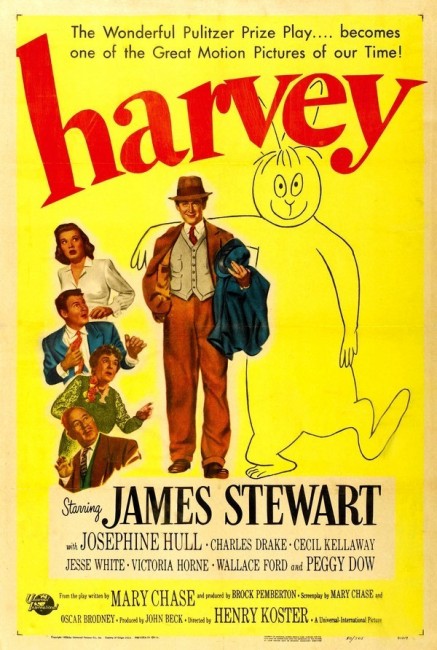 Veta Louise Simmons is tired of the social embarrassment caused by her brother Elwood P. Dowd who is obsessed with his best friend Harvey who is supposedly an invisible 6’3″ rabbit. Veta decides the only option open to her is to commit Elwood to a psychiatric institution. However, due to a mix-up of identities, Veta is committed instead and Elwood allowed to roam free. In the chaos of trying to find Elwood again, Veta and several of the psychiatric people begin to think that Harvey might be real. Gradually, they come to understand the contentment of Elwood’s simple life, which consists of drinking and socialising with strangers.

Harvey is one of the genuine American feelgood classics. It is based on Harvey (1944), a play that enjoyed a highly successful five year run on Broadway and won the Pulitzer Prize for Drama. James Stewart had played the role of Elwood during the Broadway run, having come in as a replacement for the first actor cast.

It is easy to understand why Harvey is such a classic – it, for one, stars James Stewart whose presence is almost mandatory for an American classic of this era. Moreover, it stands up in favour of a sedately lazy way of life and the good old American right to be eccentric. Harvey is a rather charming film and by the end becomes a wholly likeable one. What starts in the first half as a shrill comedy of errors – much running around and cases of mistaken identity – evens out into a plea for an extraordinarily gentle and placid way of life. James Stewart gets a marvellous little soliloquy about how he and Harvey sit in the bar and people come to them – summed up by his simple philosophy of “I always have a fine time wherever I am, whoever I am with”.

By the end, not only do we sympathise with James Stewart, but the worldview of the psychiatric patients is made to seem a far more appealing one than the everyday world. The speech by the mysterious taxi driver about how he and the patients he brings out to the asylum sit and watch sunsets, sometimes even when it is raining, but how on the way back from the asylum the cured patients shout and demand just like ordinary people, is a wonderful piece that seems to make non-conformism the most appealing way of life imaginable.

Coming at the time it did, Harvey represents an upbeat post-War mentality – the desire for a giddy gayness, the abandoning of reason and society, and a celebration of eccentric individuality. Equally, it is amazing that the film’s message, which stands up in favour of drinking, managed to get past the Hays Code.

The humour in the film comes with marvellously dry understatement. There is the wonderfully charming scene in the bar where a drunken patron goggles at James Stewart having a conversation with his invisible companion then turns to the barman and says “the one on the end’s paying for it.” The film only gives the subtlest of indications about the reality of Harvey’s existence – a hat with two earholes through it; the miraculous taxi driver; the encyclopaedia that has a message in it written specifically for Wilson; while at the most overt point, a door that invisibly opens – but at the end, the film leaves one with the unmistakable conviction of Harvey’s existence.