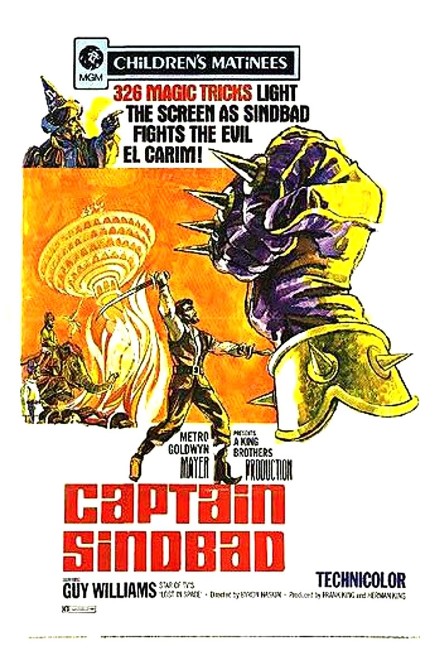 The sorcerer El Kerim usurps the city of Baristan from its weak king. The princess Jana tries to warn her beloved, Sindbad. Her intentions are discovered by El Kerim who turns men into rocs to bomb Sindbad’s ship with boulders. Sindbad survives and comes to Baristan disguised as a thief to stop El Kerim. However, El Kerim has removed his heart and cannot be killed. And so Sindbad must undertake a perilous journey to the tower where El Kerim’s heart is guarded by a hydra.

Captain Sindbad was one of several productions inspired by the success of Ray Harryhausen’s The 7th Voyage of Sinbad (1958). Captain Sindbad was produced by the King Brothers, two American producers but was filmed in West Germany. Imported for the occasion was American director Byron Haskin, who had made a number of genre entries (see below), as well as Guy Williams, star of tv’s Zorro (1957-9) and later Lost in Space (1965-8) and several of the supporting cast.

Captain Sindbad is an innocuous juvenile fantasy. It quickly follows the cliches of the Arabian Nights cycle as set down by 7th Voyage and the various cinematic versions of The Thief of Bagdad – the honest sailor who raises rebellion while disguised as a thief, the blackguard vizier usurper who has designs on the princess (who also happens to be the hero’s beloved). It is colourful in a pedestrian, undemanding way that proves mildly entertaining. The scenes with Abraham Sofaer’s magician tend toward the buffoonish.

When it comes to the fantasy on display, the conception of the effects work – flying rocs, miniature storms, the hydra, a hand that extends several metres and a pre-Exorcist (1973) head-spinning effect – tends to belie the delivery, although the film tries hard. The film’s great moment of creative corner cutting in the special effects department is having Guy Williams face an invisible dragon. The climactic confrontation with the hydra is shabby.