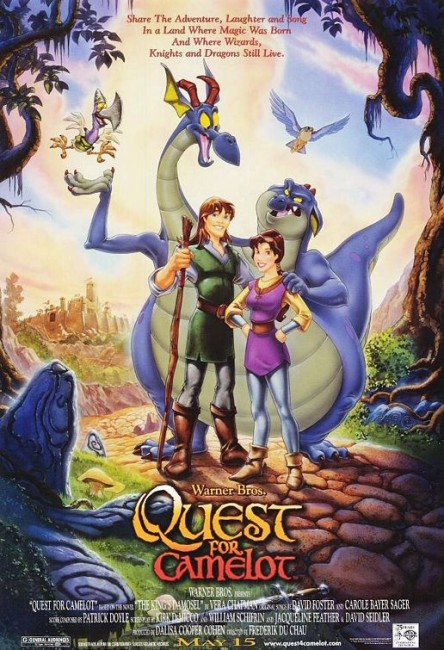 aka The Magic Sword: Quest for Camelot

In King Arthur’s Camelot, the thuggish Sir Ruber desires to become the king. Ruber tries to snatch Excalibur and Sir Lionel is killed while trying to stop him. For this Ruber is banished from Camelot. Subsequently, Lionel’s daughter Kayley grows into womanhood, desiring most of all to be a knight like her father. Ten years later, Ruber sends a griffin to snatch Excalibur but it drops the sword over the Forbidden Forest. A call goes out across the land to find the sword. Ruber takes Kayley’s mother prisoner but Kayley escapes and heads into the Forbidden Forest. There she finds allies in the blind Garrett and a conjoined dragon and tries to brave the perils of the Forest and find Excalibur before the pursuing Ruber does.

In the 1990s, Disney made Beauty and the Beast (1991). Beauty and the Beast represented a return to the high artistic quality that marked the studio’s animated films of the 1940s but had fallen into decline over the last two decades. The success of Beauty and the Beast served in turn to create a huge renaissance in animation. A number of other studios quickly rushed to jump aboard the animation bandwagon – DreamWorks SKG, Don Bluth, Richard Rich, Blue Sky Studios and Mainframe Entertainment. Some of these met with resounding lack of success, like 20th Century Fox’s attempts to create an in-house animation department, which collapsed with the huge flop of Bluth’s Titan A.E. (2000). Another failed contender was Warner Brothers who ventured out onto the big screen with Quest for Camelot and the marvellous The Iron Giant (1999). However, both of these films received middling box-office reception, forcing Warners’ animation department to close their theatrical division and retreat back to television.

Quest for Camelot is based on the novel The King’s Damosel (1976), which was the third in a trilogy of Arthurian fantasy novels written by Vera Chapman. Vera Chapman is an interesting figure – she was one of the first women to matriculate from Oxford University, she was a druid, married an Anglican vicar and at one point founded the English Tolkien Society. She did not begin writing until the age of 77, where she produced seven fantasy novels before her death in 1996 at the age of 98. All of her works reflected a lifelong interest in paganism, feminism and goddess worship.

That in mind, it is sad to watch Vera Chapman’s novel being turned into an animated film for the family mainstream. Gone entirely is Chapman’s interest in paganism, along with the book’s much more adult tone. Nor do Vera Chapman’s feminist sympathies extend too much beyond giving Quest for Camelot a strong heroine in the modern liberated Disney mold, although even then for some reason she has a different name to the one that Vera Chapman gave her.

On its own terms, Quest for Camelot might have been a fine fantasy, but the film suffers from trying to be too many things. It tries to be a fantasy adventure; it throws in a dash of romance and sprinkles it all with a few shakes of the modern fad for Celtic culture (with in particular a wailing pseudo-Celtic score on the soundtrack). First and foremost though, Quest for Camelot wants to be a modern Disney-styled film and wields the songs and cute talking animal sidekicks formula onto Vera Chapman.

It is easy to imagine Quest for Camelot as a serious animated fantasy adventure – had the story been conducted somewhere along the lines of what Ralph Bakshi tried to do with The Lord of the Rings (1978) or Fire and Ice (1983), it could have been a classic. Instead the story is almost entirely buried in the film’s attempts to imitate the modern Disney formula. The relationship between the heroine and the blind hero is not too badly conducted but the quest story proves routine – the villain is stock, while the Forbidden Forest is never particularly threatening.

The worst part of Quest for Camelot is the middle section where the film gets almost entirely taken over by the talking animal sidekicks – in particular an inept two-headed dragon voiced by Eric Idle and Don Rickles that is constantly bickering with itself, and to a lesser extent the character of a chicken that has been turned into a malevolent axe-shaped creature. What is particularly annoying is when the dragon starts jumping in with modern anachronisms – it does impressions of Elvis and Sonny and Cher; when it finally takes off, there are jokes about seatbelts, frequent flyer miles and lines like “Houston, we have a problem”; while later the chicken-axe comes out with a parody of the famous line from Dirty Harry (1971) – “Do I feel clucky? Well, do you punk?” These gags are particularly annoying as they joltingly disrupt the suspension of disbelief that we have granted to the film’s creation of a mythic-historic past.

This barrage of modern pop culture in-jokes and contemporary references in fantasy settings is one of the most annoying trends of the modern Disney – particularly guilty offenders being Aladdin (1992) and Hercules (1997) or various DreamWorks films like Shrek 2 (2004) and Shark Tale (2004) – where the clear assumptions seems to be that no audience is going to allow the necessary suspension of disbelief for a mythic setting without any contemporary handholds.

Vera Chapman created a fine fantasy adventure; Quest for Camelot turns it into is a disappointing wannabe Disney copy that has buried all the adventure under cutsie characters and quick relief gags. It’s sad – Quest for Camelot had within its grasp the potential to be a classic.

Belgian-born director Frederik Du Chau later went on to direct the live-action talking animals film Racing Stripes (2005) and Underdog (2007), a live-action version of the cartoon series about a superpowered dog. In both of these, the cutsie relief gags and pop-culture in-jokes are allowed to take over entirely.