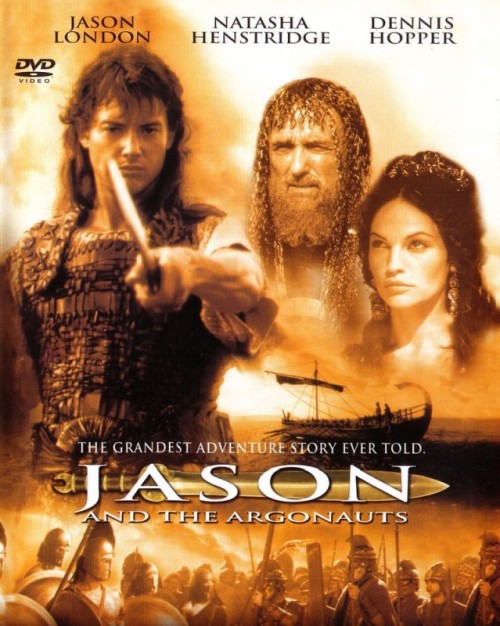 Aeson, the king of Ioclus, is overthrown by his brother, the tyrant Pelias. Aeson’s son Jason is smuggled away to safety. As he reaches manhood, Jason learns of his true parentage. He makes the decision to travel to Ioclus to meet his mother who has now remarried Pelias. Pelias wants to kill Jason but Jason, who realizes that he is blessed by the gods, tells Pelias that he can obtain the Golden Fleece, which Pelias greatly desires. Pelias agrees to furnish Jason with a ship to go in search of the Golden Fleece but tells Jason that he will kill his mother if he does not return within six months. Jason recruits a crew and names the ship The Argonaut after its builder Argos. They set sail, passing through a series of strange adventures:– being caught up by the god Poseidon; visiting the island of Lemnos, where they are seduced by the all-female society who intend to sacrifice them; visiting the island of the blind prophet Phineas who is tormented by harpies; and passing through the crushing rocks of The Sympeglades. Up on Mount Olympus, Zeus and Hera argue over Jason’s fate, with Hera trying to protect Jason and Zeus trying to intervene to make his journey more difficult. Jason and the Argonauts finally come to the land of Colchis, where King Aertes possesses the Golden Fleece. Aertes is reluctant to give up the Fleece and sets Jason a series of impossible tasks, only for Jason to succeed. Aertes then suggests that Jason and his daughter Medea marry, which Medea agrees to, having been hit by a love arrow from Eros on orders from Hera. Aertes has only suggested this in order to keep Jason in Colchis. Jason and the crew then steal the Fleece and make an escape, pursued by Aertes’ armies. However, all that awaits Jason back home is Pelias’s treachery.

Jason and the Argonauts is a tv mini-series from Hallmark Entertainment designed to fill three two-hour slots. Hallmark Entertainment is the production arm of the Hallmark cable channel in the US. Hallmark Entertainment have produced numerous other tv movies and mini-series that have adapted classic books, fairy-tales and myths. Indeed, Hallmark had previously ventured into Greek mythology with their sterling adaptation of The Odyssey (1997) and would later return with the well worthwhile Hercules (2005). Jason and the Argonauts was made by the British director Nick Willing who came to fame with the excellent Photographing Fairies (1997) and went onto make Doctor Sleep/Hypnosis (2002), The River King (2005) and Altar (2014), as well as a number of other genre mini-series mostly for Hallmark including Alice in Wonderland (1999), Tin Man (2007), Alice (2009) and Neverland (2011), as well as to create/produce The Infinite Worlds of H.G. Wells (2001).

One cannot help but make comparison between Hallmark’s Jason and the Argonauts and the previous adaptation of the same Greek myth, the Ray Harryhausen stop-motion animated classic Jason and the Argonauts (1963). Indeed, Hallmark’s Jason and the Argonauts feels almost like it is a remake of Harryhausen’s Jason, rather than an original work that goes back to the same mythological source work. Hallmark even go so far as to adapt the same parts of the Greek myth that Ray Harryhausen’s Jason did – the encounter with the blind seer Phineas who is tormented by harpies on the isle of Thrace; the journey through the Crushing Rocks of the Sympleglades; the encounter with the dragon guarding the Golden Fleece; and the battle with the skeletons.

Both versions also rearrange the original Greek myths somewhat. Hallmark’s Jason and the Argonauts does adhere to the original Greek myths more closely than Ray Harryhausen’s Jason and the Argonauts – the mini-series keeps to the sequence of events more so, whereas Harryhausen moved them around and made the skeleton fight into his climactic set-piece rather than merely one of Jason’s challenges. Hallmark add one or two other episodes from the myths – the journey to the Isle of Lemnos where the women have killed their menfolk and Jason’s task of harnessing of the fire-breathing bull. Both versions also leave a great many other aspects of the story untouched – the encounters with the giant six-armed Gegenees; the boxing match with King Amycus; the encounter with the bronze Stymphalian Birds; the Sirens and their deadly song; the journey through the Scylla and Charybdis; and the nymphs of Hesperides, among others.

Both versions of Jason and the Argonauts also make Medea into a far more noble character than the Greek myths do. In the original myths, Jason left Medea for Creusa, the daughter of King Creon of Corinth, which Medea responded to by killing their children, along with the Creusa and Creon. Medea was also perfectly happy to take her brother Absyrtis aboard The Argonaut and then chop him up and throw the pieces into the water in order to force her father and his armies to delay their pursuit to bury him. Hallmark’s version tries to adhere more to the classical version of Medea somewhat – having Medea fall in love with Jason after Hera sends Eros to shoot her with one of his arrows, as well as being a witch and using her magic to defeat Pelias – but this also ends up with a decidedly schizophrenic Medea. Many of these new elements tend to undercut the romantic aspect and make the mini-series’ Medea seem scheming.

One certainly welcomed this take on the character as it starts to buy into the vengeful Medea that we see in the myths – however, the mini-series abruptly ends with Jason and Medea’s marriage, which leaves everything on a decidedly ambiguous note, as though Jason is marrying someone who cannot entirely be trusted. The mini-series also introduces a new aspect to the myth – Atalanta having an unrequited crush on Jason, where we get the impression that he would be better off abandoning the scheming Medea and going off with her but she ends put by the wayside at the ending. One gets the impression that these elements were possibly there and maybe even shot but ended up being abandoned for purposes of bringing the mini-series in on time or perhaps retained for a potential sequel.

Most disappointing is the fight with the skeletons grown from the dragon’s blood where the acrobatics that Jason London is engaged in do not seem to be remotely reacting with the CGI skeletons. The best sequence is the appearance of the Harpies, courtesy of the Henson Creature Workshop, which is choreographed by Nick Willing with wonderfully fearsome regard. Try as it might, the mini-series fails to fly with the wonderfully fantastic imagination that Ray Harryhausen’s Jason and the Argonauts did.

Jason and the Argonauts certainly employs the lush production values that all Hallmark productions share and in this regard is an improvement on the 1963 version. This, along with Hallmark’s Hercules, are versions of the Greek myths told with an emphasis on an historical realism, which makes for welcome difference over the other pervading view of Greek myth around at the time – Renaissance’s entirely unserious Hercules: The Legendary Journeys (1994-99).

Jason London is probably too young to make for a convincing Jason. London at least plays the part with a handsome certainty, although is far too brooding to seem a convincingly heroic leader. The surprise in the cast is Jolene Blalock, better known subsequently as the Vulcan T’pol in tv’s Enterprise (2001-5). Blalock is made up and photographed with a ravishing beauty as though the cinematographers and makeup people ended up falling in love with her and wanted to craft the show as a tribute to her beauty. The best performance comes from that old trooper Dennis Hopper. Hopper gets his teeth into the part of the crusty aging king and plays with a genuine viciousness.