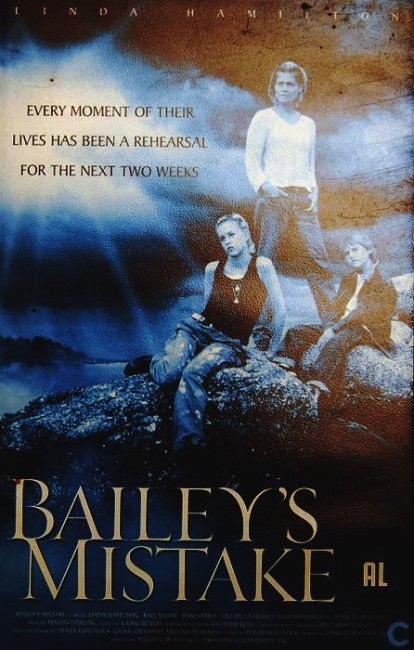 After the death of her husband Paul, Liz Donovan is shocked to learn that he had liquidated their entire savings to purchase a property on the small island of Bailey’s Mistake in Maine. She travels to Bailey’s Mistake with her teenage daughter Becca and young son Dylan, wishing only to sell the property and get their money back. On the island, they find a laidback people who are descended from Irish Travellers. Liz is disturbed to learn that Paul appears to have been born on Bailey’s Mistake, not to come from Boston as he always claimed. As Liz sets about trying to sell the property, much to the upset of the locals, she encounters claims that Paul was able to do magic, that he had healing hands and was able to fly. She refuses to believe these things but Dylan does and soon thinks that he is able to do magic too.

This tv movie made for Disney Television, appearing on The Wonderful World of Disney (1965-2019) is a real oddity. It is hard to work out what the filmmakers were trying to make. On one level, it is a film about the rediscovery of Irish roots a la a number of other Magical Realist films on the subject such as Into the West (1992) and The Secret of Roan Inish (1994).

The film offers a strange and intriguing set-up and keeps hinting a constant sense of magic inherent in the people on the island. There are some decidedly weird moments – like when we see someone casually flying through the air in the background of a shot, or how Kyle Secor is said to be The Devil and when we go to visit him proves perfectly charming but is then shown to have a twitching tail hidden in his pants. These scenes leave one fascinatingly bewildered and wondering what on Earth is going on.

If nothing else, Bailey’s Mistake is entirely different to anything one expects of a Disney Channel film. The oddness of the initial set-up leaves one wondering, although it soon slips into familiar patterns – in actuality, it is not that different from a film like Local Hero (1983) or tv’s Northern Exposure (1990-5) about a city-bred outsider moving to a strange small town and at first seeming out of place but eventually being won over by the town’s eccentric ways.

Moreover, after setting up various fantasy elements, the film seems at a loss to know what to do with them. They just fade into the background and are left unresolved – the film’s resolution is a mundane one that leaves you with the feeling that much of the story remained to be told. (Perhaps Disney were intending to spin Bailey’s Mistake out as a tv series, although one finds it a hard stretch of the imagination to think how this would have worked). Most disappointingly, Kyle Secor is said to be The Devil and we get evidence – his twitching tail, intense eyes – that seems to indicate this, but the end contradictorily reveals him to merely be the son of one of the villagers.

The Maine locations (in actuality Nova Scotia) are all shot in gauzy lighting and there is a standard cliche Irish fiddle and tin pipe score. Linda Hamilton is an actress who always seemed eminently capable of making it to the Hollywood A-list after films like The Terminator (1984) and Terminator 2: Judgment Day (1991), even though she was a bland actress, but never managed to do anything to take advantage of the profile these offered her. Here she is starting to get old and looks haggard.