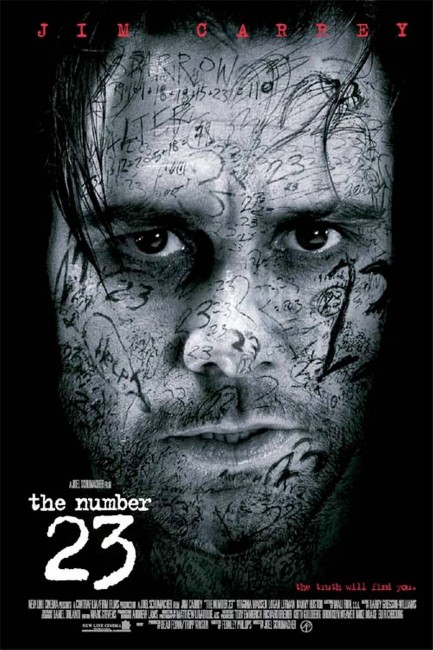 Dog catcher Walter Sparrow meets his wife Agatha for dinner. While waiting for him, she was browsing in a second-hand bookstore and brought a book called ‘The Number 23’ by Topsy Kretts. Walter begins reading the book and becomes engrossed in the story of the detective known as Fingerling. Fingerling was called in to deal with a woman who was suicidal because she believed that everything in her life kept adding up to the number 23. After seeing the woman jump from the window, Fingerling began to see coincidences of 23 or combinations of 2s and 3s everywhere in his life. As he reads, Walter finds a disturbing number of parallels between Fingerling’s life and his own. He then starts seeing coincidences of the number 23 everywhere too. Driven crazy and obsessed by the number 23, Walter began to think that both the book and these coincidences are driving him to seek a solution to an unsolved murder.

I have been consistent in my view over the last few years that Joel Schumacher is the worst director currently working in the Hollywood mainstream. Schumacher started out as a window dresser in the 1970s and graduated to costume designer and then scriptwriter with works like Car Wash (1978) and The Wiz (1978). He then became a director with The Incredible Shrinking Woman (1981) – his best film. Almost all of Joel Schumacher’s films demonstrate a fascination with style – lighting, posturing, costume design, sets – at the frequent absence of any sense when it comes to worthwhile scripting. Even then the style that Schumacher piles on is something that he has almost always appropriated from other directors. Indeed, Schumacher, while he wants to be seen as a dabbler in various genres, ends up being someone who gives the impression that he affects styles and trades genres just like they were the window dressings he used to decorate. Joel Schumacher’s other films include St Elmo’s Fire (1985), The Lost Boys (1987), Flatliners (1990), Dying Young (1991), Falling Down (1993), The Client (1994), Batman Forever (1995), A Time to Kill (1996), Batman & Robin (1997), 8MM (1999), Flawless (1999), Tigerland (2000), Bad Company (2002), Phone Booth (2002), Veronica Guerin (2003), The Phantom of the Opera (2004), Town Creek (2009) and Twelve (2010).

In the past, Joel Schumacher has pillaged the styles of directors like David Fincher, Ridley Scott and Lars von Trier. The Number 23 is clearly Joel Schumacher’s attempt to make an M. Night Shyamalan film. The script from novice writer Fernley Phillips comes in the same vein of the conceptual twist/reality bender film that Shyamalan fairly much created with the success of The Sixth Sense (1999). Shyamalan frequently delves into the same kind of territory that The Number 23 does – the characters in films like Unbreakable (2000), Signs (2002) and particularly the much laughed-at scenes in Lady in the Water (2006) with people finding meaning in crossword puzzles and cereal boxes feature characters constantly looking for meaningful signs and portents amid seemingly unconnected things.

You could perhaps consider The Number 23 as an ultra-paranoid version of the previous year’s Stranger Than Fiction (2006) wherein Will Ferrell discovers that he is a fictional character in a book, as spun through the M. Night Shyamalan-esque reality bender. There are also a number of similarities to The Machinist (2004). Although the work that The Number 23 resembles more than any other is the classic Dennis Potter tv mini-series The Singing Detective (1986), which featured Michael Gambon as an ill writer in a hospital bed, re-reading and reconstructing a detective story he once wrote where the fictional story began to blur into and delve down into his own personal past.

Certainly, The Number 23 takes an existing phenomenon as its basis. Or perhaps one should say a phenomenon that crank theorists have devoted a good deal of time to – namely that numbers in a person’s life involve or add up to 23 and that a great many significant historical dates and deaths have the number 23 in them. There are a number of internet sites that document supposed occurrences of the phenomena. (Indeed, Number 23 conspiracy theory also formed the basis of an earlier film, the German-made 23 (1998), the true-life story of a hacker who became obsessed with 23 coincidences and eventually committed suicide). The fact that Number 23 paranoia was first created in Robert Shea and Robert Anton Wilson’s The Illuminati Trilogy – which consists of The Eye in the Pyramid (1975), The Golden Apple (1975) and Leviathan (1975) – is significant. The Illuminati Trilogy was written as a parody of conspiracy theories.

Even considered as an actual phenomenon, 23 significance is an example of what psychologists’ term apophenia – the phenomenon of finding patterns in random and unconnected data. Most believers tend to psychologically filter data (the confirmation bias phenomena) where only the evidence that supports existing conclusions is considered while evidence that does not is disregarded. (There should be no significant difference in results, for example, if any prime number other than 23 was chosen). Moreover, the theory allows a good deal of cheating – reversing the numbers and allowing 32 as well, using the numbers separately or adding other numbers together until they arrive at 23.

Devoting an entire film to 23 numerology is certainly one of the more whacked out ideas that New Line Cinema have had in recent years. (Although considering that The Number 23 was released by New Line the same year as the heads of the studio also wrote and directed the decidedly loopy The Last Mimzy (2007) with its belief in palm reading, astrology and Buddhist mysticism, one might be not too far wrong in thinking that the studio are angling to rename themselves New Age Cinema).

It is not entirely clear to what extent the people involved in making this film believe in Number 23 significance – after all much of the film is intended to portray the decaying mental state of a man who became obsessed with the number. However, Jim Carrey does confess on the dvd extras that he took the film on because a friend turned him on 23 significance and he found a number of occurrences in his own life. (Representing the side of reason, Virginia Madsen tells of a thought experiment she conducted where she decided to consider that cupcakes were significant and then started to see an uncommon number of these in her daily life).

Joel Schumacher’s visual style is, as might be expected, affected and posed. The main problem with The Number 23 is not so much this but a completely absurd script. You are not sure whether the film is being serious and believes in 23 numerology or not. Certainly, it seems to inhabit the headspace of a schizophrenic in terms of making all manner of non-sequitir connections between unrelated things. About the point that we get to exchanges like: “And a dog told you this?” “Ned just isn’t a dog – he’s a Guardian of the Dead,” you realise that The Number 23 has travelled well into the territory that requires either total dementia or enormous ingenuity to save it. Needless to say, Joel Schumacher, the patron saint of pretentious filmmaking and empty-headed style, does not have this.

The Number 23 reaches one of the most ludicrous twist ending revelations that one has seen in some time. [PLOT SPOILERS] We learn that Jim Carrey did in fact conduct the murder of Rhona Mitra and then fled to the hotel room and wrote the book as an allegory in a fever of guilt. He then attempted to commit suicide by jumping out the window but survived the fall and was placed in a mental hospital with severe brain damage that blanked out all memory of his past life. Eventually deemed cured, he was released and met Virginia Madsen right outside the asylum door, married her and went onto a happy life as a dog catcher (without seemingly wondering or she ever asking any questions about his past, ever bumping into anyone he knew or being contacted by his family). Somehow the manuscript he wrote while in his fever dream was then privately published and by some whopping coincidence just happened to end up in a second-hand bookshop where Carrey’s wife Virginia Madsen was waiting for a dinner date with him. This surely gets my award for the most ludicrous and completely improbable scripting contrivation in recent years.

The Number 23 features Jim Carrey back in Serious Actor mode, something that is not always a pretty sight. Certainly, Joel Schumacher shows Carrey at his most emaciated and disturbed, although for all that it is a hard stretch of suspension of disbelief to accept Jim Carrey as the kind of deranged, thuggish cop that we usually see people like Steven Seagal and Chuck Norris playing.