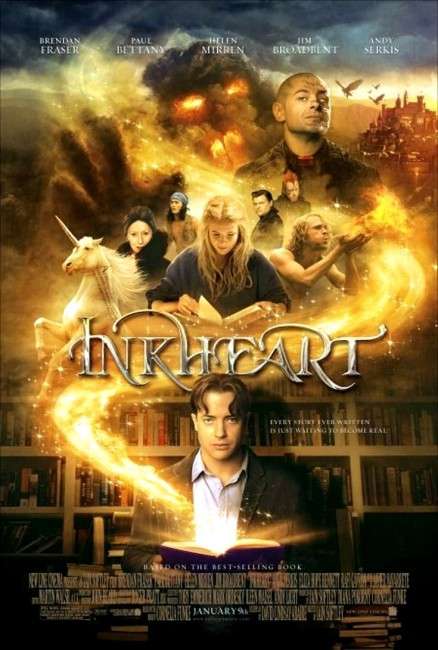 While touring Europe with his daughter Meggie, book restorer Mortimer Folchart finds a rare copy of ‘Inkheart’ in a used bookstore. After being approached by a strange man, Dustfinger, Mortimer immediately flees with Meggie to take refuge at his Aunt Elinor’s villa in Italy. However, Dustfinger tracks them there, having made a deal with the villainous Capricorn. Captured, Mortimer, Meggie and Elinor are taken to Capricorn’s castle. Capricorn reveals that Mortimer is a Silvertongue, someone who has the power to bring what he reads aloud from a story to life. While reading ‘Inkheart’ to Meggie when she was young, Mortimer brought Capricorn, his thugs and Dustfinger out into the real world from inside the book. However, the cost of this is that someone from the real world is always sent back into the book in their place and this was Mortimer’s wife, Meggie’s mother Resa. Mortimer has sworn off reading aloud since. Capricorn has no intention of returning to the book and has methodically destroyed every copy of ‘Inkheart’ he can find. He now forces Mortimer to produce valuables out of other stories for him. However, they make an escape and go in search of the book’s author Fenoglio to use his original manuscript. Discovering that Meggie is also a Silvertongue, Capricorn makes her his prisoner in order to get her to bring the all-destroying Shadow out of the book so that he can take over the world.

Ever since the massive successes enjoyed by the Lord of the Rings and Harry Potter films, the search goes on for the next big fantasy franchise with producers buying up multi-part book series everywhere to adapt and hopefully spin off into a successful series on the big screen. Unfortunately, cinema of the late 00s has been littered with tentative starts to fantasy series that have failed to make it past the first film – see the likes of Eragon (2006), The Golden Compass (2007), The Seeker: The Dark is Rising (2007), Cirque du Freak: The Vampire’s Assistant (2009), The Last Airbender (2010) and so on.

In the case of Inkheart, the film is based on a trilogy of books by German children’s author Cornelia Funke. Funke’s book Inkheart (2003) proved a popular success primarily in Europe and she followed it with two sequels, Inkspell (2005) and Inkdeath (2007), which continue the adventures of the characters in and out of the world inside the story. Other Cornelia Funke books have been adapted to the screen with the fine children’s fantasy The Thief Lord (2006) and several non-fantastical films based on her Wild Chicks books about an unruly girl gang. Funke sold the rights to Inkheart to New Line Cinema, the producers also of The Lord of the Rings and The Golden Compass, and made a point of staying on board as a producer.

Inkheart was placed in the hands of Iain Softley, a British director who has made acclaimed works such as Backbeat (1994) and The Wings of the Dove (1997) but has turned out consistently banal and underwhelming work whenever he has touched genre material with the likes of Hackers (1995), K-PAX (2001), The Skeleton Key (2005) and Curve (2015). Under Iain Softley, Inkheart becomes another of these fantasy series almost-rans. New Line Cinema clearly did not like the film and it sat in distribution limbo for some time before being granted a cinematic release where it only did middling business.

The idea of characters coming out of books has been done in various works of meta-fiction before – see the likes of I, Madman (1989), In the Mouth of Madness (1995) and Stranger Than Fiction (2006) and others dealing with the same happening with film – The Purple Rose of Cairo (1985), Last Action Hero (1993) etc. (For a more detailed overview see Meta-Fiction Films). Perhaps the closest that Inkheart comes to is the Doctor Who episode The Mind Robber (1968) or the films Dream One (1984) and The Pagemaster (1994), which had characters venturing into a literal realm of fiction, although in all of these the idea was played the other way around – people entering a realm where fictional characters existed rather than emerging out of it as here. Far better than all of these in terms of out-and-out hilarity and mind-boggling absurdism in the play between reality and the realm of fiction is Jasper Fforde’s Thursday Next books, which would make for a great series of films someday – even if it would take a total madman to come anywhere near conducting a faithful adaptation.

I liked Inkheart, the characters, the lushness of production – there being some particularly beautiful photography of the Italian countryside – and a fine cast line-up. But the more I thought about it afterwards, the more Inkheart failed to work satisfyingly as a fantasy. The idea is certainly an interesting one – at least at the outset. The film has a playfully appealing promise as we see all manner of items from fiction littered in the background, including gingerbread houses, unicorns, appearances from Toto and the flying monkeys of The Wonderful Wizard of Oz (1900), the ticking crocodile from Peter Pan (1904).

Unfortunately, all of this is upfront showmanship that leads precisely nowhere. The idea of Brendan Fraser as a ‘silvertongue’ who can bring objects from fiction into this world is never explored any more than that – it is just a power he has and we are given no explanation of how and crucially why it works. I kept wanting to ask questions about how the premise worked – can a character from fiction die once they are brought into the real world (as Andy Serkis does at the end, along with numerous of his cohorts) when their fate is spelled out in the story (as is the case with Paul Bettany’s Dustfinger)? When they are killed in the real world, does that mean they are erased from the book as well? Once a character has emerged from fiction into the real world, what happens to the character in the story? Surely there must be some kind of absence in the narrative that would be noticeable to people reading. More importantly, what happens to the people who are transported into the story – it would certainly be an interesting film that dealt with their problems and what would happen to them. For that matter, how did Resa emerge back out of the story after being trapped in there?

Alas, once the basic premise is set up, the film has no interest in exploring it any further than the plot requires and the rest of the film is spent solely in terms diagrammatic momentum where characters move from Point A to Point B to Point C and back, are captured, escape, are recaptured again and so on. Certainly, the film is pitched as a fantasy adventure and in this sense, the running around is doing what is required of it, but the lack of anything more than that is frustrating. The film arrives at a routine big CGI-driven climax where the young heroine manifests The Shadow out of the book, followed by a desperate attempt to save the world etc etc. Everything is wound up in a predictably happy ending.

Brendan Fraser goes through the film with the same blandly square-jawed nice guy hero expression that has served him for the better part of the last decade. Surprisingly, Fraser was Cornelia Funke’s original choice for the role, she having based the character in the books on him so it is a case of the film honouring the author’s intentions exactly in this case. It is good to see Andy Serkis in a villainous live-action role, even if the part is no more than evil dressed-in-black-bad-guy-with-a-world-conquering-plan by the numbers. Helen Mirren, who went onto this part almost straight after winning an Oscar for The Queen (2006), plays the largely throwaway role of the dotty aunt. The one who stands out the most is Paul Bettany in a role of interesting moral shadings and ambiguities that he makes into a character one ends up caring about by the end of the film – certainly, far more so than banal hero Brendan Fraser.