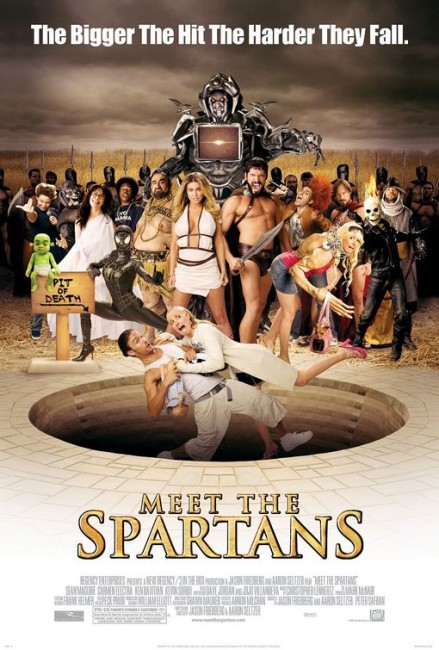 Leonidas, king of the city-state of Sparta, is approached by a Persian messenger, demanding that Sparta bow to Xerxes, the god king of Persia. Leonidas instead kicks the messenger down into a pit and then sets out to the Hot Gates with an army of slightly less than 300 warriors to defend Sparta from the advance of the Persian army.

Meet the Spartans comes from the writing-directing duo of Jason Friedberg and Aaron Seltzer. Friedberg and Seltzer first appeared as co-writers on Spy Hard (1996), directed by Jason’s father, and Scary Movie (2000) and then went out on their own as the directors/writers of Date Movie (2006), Epic Movie (2007) and Meet the Spartans, followed by Disaster Movie (2008), Vampires Suck (2010), The Starving Games (2013), Best Night Ever (2013) and Superfast! (2015). All of these have proven reasonably successful.

Friedberg and Seltzer’s films fall into a simple formula that consists of a series of rapid-fire spoofs of various films that have come out in the previous twelve months. Indeed, Friedberg and Seltzer’s films are surely the filmed equivalent of the movie parodies that appear in Mad magazine. (Although, they do not feel like parodies so much as they do Friedberg and Seltzer quoting popular culture references and expecting that audiences will laugh in recognition). There are also a good many snide jokes involving lookalikes of celebrities that have made tabloid headlines in about the last five minutes. Most of the humour in their films is crude, vulgar and witless. The duo have also started writing a series of excruciating rap songs for their films.

The principal parody in Meet the Spartans is 300 (2007). In fact, the plot of Meet the Spartans follows 300 to an almost slavish degree. (We even see a copy of Frank Miller’s original graphic novel 300 (1998) being thrown out the door at one point). The humour is all obvious. Spoofing the inherent homoeroticism that lay beneath 300 – all the buffed physicality, the obsession with men’s primal honour – is far too easy a target and not too surprisingly Meet the Spartans spends much of its running time playing off this in some way. There is occasional amusement when Friedberg and Seltzer get loose on some of the artistic pretensions of Zack Snyder’s direction – where the slow-motion swordfights are upstaged by Sean Maguire wandering through dispatching opponents with a wet towel. The film has clearly been made on a low-budget – the goat path leading to the Hot Gates is notably a stagebound set – and there are is an ongoing jokes about the Persian armies being represented by two slaves holding up a blue screen.

Meet the Spartans also comes with a lengthy list of parodies/quotes from other films. These include:- the baby from Shrek the Third (2007); the naked torture scene from Casino Royale (2006); Happy Feet (2006) where the lurking wolf from 300 turns into a tap-dancing penguin talking gangsta before engaging in a wrestling match with Sean Maguire that morphs into a bizarre variant on the naked fight in Borat: Cultural Learnings of America for Make Benefit Glorious Nation of Kazakhstan (2006); the oracle of the Ephors revealed to be a lookalike of America Ferrara from tv’s Ugly Betty (2006-10); Little Miss Sunshine (2006); the dance showdowns from Stomp the Yard (2007); a vaguely amusing spoof of Spider-Man 3 (2007) where Diedrich Bader turns into the Sandman only to have a cat use him as a dirtbox and then be sucked up by Carmen Electra with a dustbuster, while she turns into Venom, only to have her web cut by a Donald Trump lookalike as she dangles upside down outside a skyscraper window; Transformers (2007) where Ken Davitian becomes a Decepticon only to pull his own plug out from the wall; Ghost Rider (2007) who is promptly put out with a fire extinguisher; and several jokes about Sylvester Stallone as Rambo presumably in anticipation of Rambo (2008), which opened the week after Meet the Spartans.

There are numerous other references – most being too brief to count as parodies – to tv’s Heroes (2006-10) with people quoting “save the cheerleader” even though such does not actually refer to anything going on in the film, the battlefield turning into a brief simulation of Grand Theft Auto (1997), the Lonely Girl videos on You Tube, to the enigmatic end of the last episode of The Sopranos (1999-2007), as well as a number of American tv commercials that I am not familiar with. There is also Kevin Sorbo who looks embarrassed as he seems to be trying to figure out what he is doing in the film, having presumably been cast as some reference/spoof to his own turn in tv’s Greek myth adventure series Hercules: The Legendary Journeys (1994-9).

There are numerous jokes and spoofs about various contemporary tv reality or game shows like American Idol (2002– ), America’s Next Top Model (2003– ), Dancing with the Stars (2005– ) and Deal or No Deal (2005-9 ). The celebrity lookalike gags have been allowed to take over the film in a major way with snide jokes about Paris Hilton (who becomes the hunchbacked traitor Ephialtes here), as well as the American Idol panel, Lindsay Lohan, Tom Cruise, Ellen DeGeneres, Dane Cook, George W. Bush, Brad Pitt and Angelina Jolie, and Britney Spears and Kevin Federline. These lookalike jokes go on for what must be a record ten minutes during the midst of the end credits.

Meet the Spartans is a film that, like Epic Movie and Disaster Movie, has no existence of its own outside of riffing on the films that came out in 2007. The occasional one of these might have been funny as a gag on Saturday Night Live (1975– ) or one of the far more sophisticated movie parodies that are regularly conducted on French and Saunders (1987-2017). However, there is little here that even managed to bring a smile to one’s face, let alone produced a laugh. Maybe it is just that I am outside the film’s 18-21 year-old target audience group.

Mostly though, Meet the Spartans is crude and witless – Jason Friedberg and Aaron Seltzer feel like the equivalent of bad stand-up comics who keep on making foul-mouthed and off-colour jokes oblivious to whether their audience is responding to them on the theory that some of them are bound to hit. When they try to get clever with self-deprecating meta-fictional jokes like “Harry Knowles of Aintitcool.com says the movie is just a cheap ripoff of 300,” they hit the nail on the head only too clearly.