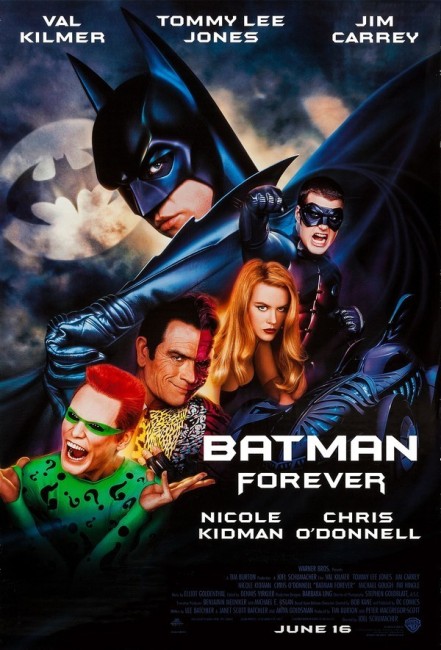 Bruce Wayne rejects the idea presented by one of his employees – weird electronics technician Edward Nygma – for a 3D tv that is beamed directly into people’s brains. Nygma takes this personally and his mind snaps. He adopts a costume, calls himself The Riddler and starts using his invention to read people’s minds and take revenge on Bruce. As Batman, Bruce must also deal with the threat of former District Attorney Harvey Dent whose mind snapped after a criminal he was prosecuting threw acid at him, hideously scarring him down one side of his face. Dent has been left with a split personality and an obsession with doing everything by twos and now calls himself Two-Face. Two-Face attacks a circus where he threatens to detonate a bomb unless Batman reveals his secret identity. The Flying Graysons family trapeze act are killed as they try to dispose of the bomb. Bruce takes the sole survivor, young Dick Grayson, under his guardianship, trying to convince him not to take the path of vengeance. Dick then adopts a mask and costume, names himself Robin and joins Batman. The two of them set out to stop Two-Face and The Riddler who have combined forces.

The first two Batman films – Tim Burton’s Batman (1989) and Batman Returns (1992) – were genuine masterpieces, glitteringly beautiful articulations of four-colour comic-books that took their characters beyond the fancy dress costumes and into dark psychological recesses. On the other hand, Batman Forever, the third entry in the series, could in no uncertain terms be called a fiasco of monumental proportions. Batman Forever comes without previous star Michael Keaton who finally became sick of playing second banana to the larger-than-life villains, and the creative presence of Tim Burton, who steps back from the directorial chair. (Burton does take a producing credit – although the actual extent of his involvement is anybody’s guess).

Robin Williams had long been rumoured to be cast in the part of The Riddler. However, one had a sinking feeling about Batman Forever from the moment they learned that Robin Williams had been dropped in favour of then flavour of the moment Jim Carrey, the facially hyperkinetic actor who had just come from the huge box-office success of the likes of Ace Ventura: Pet Detective (1994), The Mask (1994) and Dumb and Dumber (1994). Between them, Jim Carrey and Tommy Lee Jones, who is usually capable of great things – he had just won a well-deserved Oscar for The Fugitive (1993) – run unrestrained though the film in two performances that only astound by their loudness and the epic awfulness of their overacting. “Am I being over-the-top? It’s hard to tell,” yells Carrey at one point, in the film’s most unwittingly damning line.

The two previous Batman films certainly allowed people like Jack Nicholson and Danny DeVito opportunity for similar all-stops-pulled overacting but at the same time tightly constrained their performances within the dark psychology of the characters. Not so Batman Forever. It was the ability to get behind the masks and clown faces and see the villains in psychological terms that made the first two films so darkly captivating. Batman Forever demonstrates no understanding of that and the villains here lack any psychological depth at all, despite the presence of a character who is supposed to be a criminal psychologist. The script even manages to completely omit the crucial idiosyncrasies that the two villains had in the comic-book – Two-Face’s schizoid moral split between giving into his twisted side or his good side, as decided by the flipping of his two-headed coin; and The Riddler’s psychological dependence on riddles that tip Batman and the authorities off to where he is going to strike. (Indeed, the Batman (1992-4) animated tv series that came out at the same time invented far more psychologically compelling origins for both villains than Batman Forever does).

Without any dimension to the villains, Jim Carrey and Tommy Lee Jones are just lunatics in silly costumes. In fact, Batman Forever ends up resembling no more than a horridly overbudgeted episode of the Batman (1966-8) tv series with its campy scenery-chewing guest appearances from well-known actors of the day. This is something that would reach its zenith with director Joel Schumacher’s subsequent entry in the series, the astoundingly bad Batman & Robin (1997). It was fairly much regarded that Joel Schumacher killed the Batman franchise off after this point and it took nearly an entire decade before Christopher Nolan could bring it back to strength with Batman Begins (2005).

Heartthrob Val Kilmer is badly miscast as Batman. For a start, Val Kilmer seems only about thirty. When it comes to the introduction of Robin, Kilmer is simply not the right age to play mentor – the relationship seems more one of equals than, as it has always traditionally been, of the older man to his younger ward. The part has clearly been written with Michael Keaton, who was in his forties and exactly the right age, in mind. Nor has Val Kilmer ever been what one would exactly call an expressive performer and the part seems to have simplified for his limited acting range – gone is all the twitchy nervousness and moral indecision in Keaton’s portrayal. Nicole Kidman has no other point in the film than to be the love interest. At least, Michael Gough gives Alfred the best airing of all the four films, at last bringing out the character’s customary dry wit.

The single piece of characterization that the entire sorry farrago does get right is the Robin origin. Robin was always an annoyance in the original comics – he was too obviously an attempt to add kiddie appeal. However, Batman Forever succeeds in assimilating him into the movie series’ Dark Knight milieu with conviction, giving him his own battle between light and darkness. Chris O’Donnell contrives to make Robin a convincingly typical teen, rather than the usual fawning adolescent – amusingly enough, his immediate response to finding the Batcave is to hotwire the Batmobile and go looking to pick up girls.

Batman Forever‘s greatest mistake was to replace Tim Burton with Joel Schumacher as director. Joel Schumacher is possibly the worst director to have ever been allowed loose on a multi-million dollar budgeted film (although he gets stiff competition from people like Renny Harlin, Michael Bay and Stephen Sommers). Schumacher, in films like The Lost Boys (1987) and Flatliners (1990), has proven himself a visually stylish director – although very much a director of mood as opposed to substance. Joel Schumacher invests Batman Forever with much visual style but the plot is hopelessly empty-headed and one that reveals Schumacher as no more than an MTV director full of flash and theatrics and zero in the way of substance.

The film seems to be trying to overcompensate for the lack of both Michael Keaton and Tim Burton by the very busyness of its story, as though by keeping the audience involved they will not notice these deficits. It is an incredibly crowded story – with running subplots that include two super-villains, the introduction of Robin, a new love interest, plus more unresolved psychological issues from Batman’s past. The motif of psychological splits that ran through the previous two films is here upped to absurd extremes. Everyone seems psychologically split between morality and darkness – Two-Face naturally; Dick/Robin between revenge and morality; Chase Meridian between her love for Bruce Wayne or the wrong man; Batman, in a poorly developed piece of motivation, over whether he should continue to fight crime any longer. The very busyness of the plot naturally tends to grant some of these elements scanty development – one never gets to work out what the flashbacks to Bruce’s childhood are meant to be about, for instance. In the absurdly packed number of character stories running through the plot, the film well could have done with one super-villain less – Two-Face is superfluous as a character, he could have been replaced by a standard crime kingpin without any discernible difference.

There are also times when the plot descends to moments of amazing silliness. The scene where Batman deduces that the numbers left in The Riddler’s riddles represent an alpha-numeric code that spells the word ‘Mystery’ and can be homophonically read as ‘Mr E’ and therefore refers to Mr E(dward Nygma) is a piece of deductive reasoning that is mind-boggling in its leaps of intuitive logic. The previous Batman films always made nominal attempts to contain their Bat-acrobatics and action within the realms of plausibility but Batman Forever throws any semblance of this out the window – having Batman making leaps from the tops of buildings to the ground without even the benefit of the usual Bat ropes or parafoils; the Batmobile being able to vertically scale walls when caught in a cul-de-sac; and in the opening moments, a huge steel vault being able to be swung back into its place while attached solely to a Batarang.

The sets throughout are particularly stunning. A new Batcave; a circus with huge threatening Gothic gargoyles inside the tent; streets that seem like the previous film’s dark city gone Japanese neon and all laid out on a series of wonderfully packed and cramped multi-levels; street gangs in striking UV paint; Two-Face’s hideout, which comes in dual colours, split down the centre of the room, one side in rich white and the other in dangerous black; The Riddler’s vast amphitheatre – a colossal tower where the climactic fight takes place aboard a descending booby-trapped chandelier of sorts. Alas, while Tim Burton’s Batman films seemed like they were taking place in a darkly urgent Gothic comic-book world; Joel Schumacher’s Batman films by comparison seem to be take place in merely a flashy nightclub.

(Nominee for Best Cinematography and Best Production Design at this site’s Best of 1995 Awards).