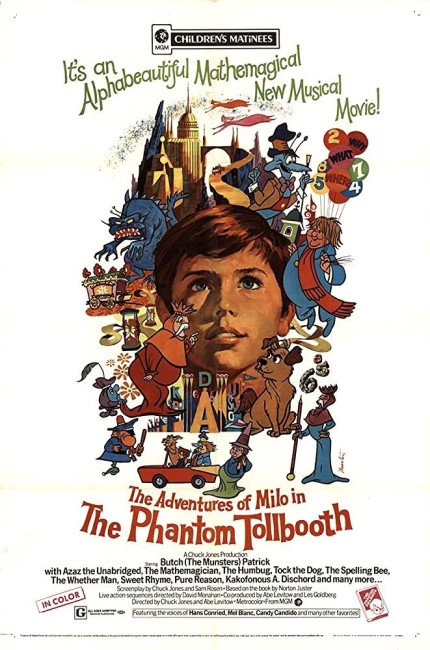 Young Milo finds a mysterious crate that has been left in his bedroom as a gift. It opens up into a tollbooth. Milo takes a ride through it and finds himself in a magical world. Journeying through the various lands and encountering the strange people there, he eventually finds himself caught in the ongoing war between the land of Dictionopolis, whose king insists on the supremacy of words, and the land of Digitopolis, whose king insists on the supremacy of numbers. It is up to Milo and companions to bring back the banned Princesses of Rhyme and Reason and unite the two kingdoms once again.

The Phantom Tollbooth was one of a host of children’s films made in the late 1960s/early 1970s that embraced psychedelia to create memorable spectacles of nonsense absurdism. Others included the likes of Yellow Submarine (1968), Pufnstuf (1970) and Willy Wonka and the Chocolate Factory (1971).

The Phantom Tollbooth was made by Chuck Jones, perhaps one of the world’s greatest cartoon animators, who was responsible for numerous of Warner Brothers’ Bugs Bunny and Daffy Duck shorts, as well as creating Road Runner. The film is based on The Phantom Tollbooth (1961) by Norton Juster, an architect who had a sideline writing children’s books – this was his first published book and came with illustrations by Juster’s roommate, the celebrated cartoonist Jules Feiffer.

With The Phantom Tollbooth, his one and only venture into feature-length animation, Chuck Jones adapts a 1961 book by children’s writer Norton Juster. Norton Juster appears to have written the original book as an educational allegory, whereas Chuck Jones uses Juster’s allegorical universe as a springboard to leap off into surrealist play. The result is akin to watching a remake of Disney’s Alice in Wonderland (1951) that is trying to be an educational film.

The film is stacked with a dizzying array of visual puns – whiches, spelling bees, half-baked ideas, watch dogs, whether men, a senses taker and one character who literally gets to eat his own words. Visually, Jones is clearly having a great deal of fun, often traveling off into pure plays of abstract colour and transformation of shapes – with wild landscapes where clouds and bridges are composed out of letters, swans shaped like the letter ‘S’ swim down rivers, where there are cliffs of Dali-esque melted watches and, in one lovely image, a composer conducts sunsets. Visually, this is maybe the closest an animated film has come to capturing the essence of a Dr Seuss story.

The Phantom Tollbooth was unfortunately not a success and was little seen in its time. It has however slowly developed a reputation through tv release. In the 2010s, a live-action remake was announced.