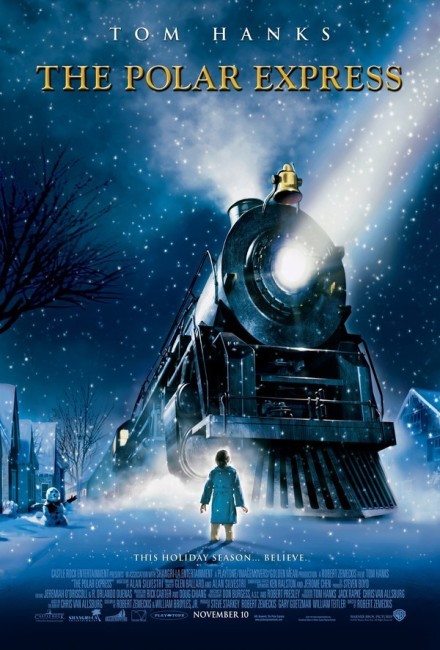 A boy goes to sleep on Christmas Eve. However, he has started to become sceptical and no longer believes in Santa Claus. As he drifts off to sleep, he is startled awake by the appearance of a steam train outside his window. The conductor tells him that this is The Polar Express that takes children to visit the North Pole on Christmas Eve. After a moment’s hesitation, the boy jumps on board and joins the other children. They set forth on an extraordinary and peril-filled journey.

Almost all of the press concerning The Polar Express had less to do with the qualities of the movie than it does the way that it was made. In this case, The Polar Express was the first high-profile feature-length film to use the process of Motion Capture Animation. Motion Capture Animation is a modern CGI version of the old hand-drawn animation process known as rotoscoping where animators would trace over the top of live-action film in order to achieve lifelike movements. With Motion Capture Animation, actors are given costumes with sensors attached that map onto points in three-dimensional space inside the computer environment. Thus animators can capture a fully naturalistic performance but then tinker with texture, look, colour and so forth. The most celebrated case of Motion Capture before this was the creation of Gollum in The Lord of the Rings trilogy.

The Polar Express, however, represented a quantum leap forward in that the creation of one digitally augmented character has been extended to an entire film. Here all of the characters are motion captured actors – indeed, it is a case where just about every single character in the film, from the boy to the conductor, the hobo and Santa, have all been played by a single actor – Tom Hanks. [Although the publicity department’s claim to The Polar Express‘s being the first feature-length Motion Captured film are erroneous – it was beaten there by the Indian animated film Sinbad: Beyond the Veil of Mists [2000]). The other trend that The Polar Express started was that of animated films being released in 3D.

The Polar Express was directed by Robert Zemeckis who was known for films such as Back to the Future (1985), Who Framed Roger Rabbit? (1988) and Forrest Gump (1994) (see below for Zemeckis‘s other films). Zemeckis is a director who has remained at the cutting edge of moviemaking technology. Roger Rabbit created a revolution in merging human performances with hand drawn animated characters; Death Becomes Her (1992) and Forrest Gump were among some of the first films to employ digital technology; while Zemeckis always takes on arduous challenges – Cast Away (2000) halted production for an entire year so that Tom Hanks could lose a third of his body weight and grow his hair out to play the title castaway. What Zemeckis has created with The Polar Express is not entirely an animated film, although certainly no longer a live-action one but some exciting new medium that lies between the two.

Much of the critical response to The Polar Express centred around the look, where the hyper-realism of the characters was frequently called “creepy”. I cannot say this was ever a problem to me. Once you become used to this, which takes about five minutes, and if you did not know anything about how The Polar Express was made, you could just be watching a standard animated film, the only difference being that the conductor has the distinctive features of Tom Hanks.

Nevertheless, the process gives a superb sense of realism to the characters – there is a crystalline definition to the features on the face of the boy where you can see all the emotions play out. The performances captured are fantastic – the lonely boy has a plaintive charm, while the girl comes to life with a strength of her own. Robert Zemeckis directs the film with epic dramatic flourish and attention to the minutiae of detail where we see everything from the casual frosting on the window of the train to the architecture of the city and factories stretching away into the distance in flawless clarity.

The Polar Express is adapted from a 1985 illustrated book by Chris Van Allsburg, previously best known as the author of Jumanji (1995) and subsequently of Zathura: A Space Adventure (2005). One has not read Chris Van Allsburg’s book but the film gives the impression of having been landed with the idea of a train journey, found this not terribly exciting on its own and decided to invent a series of set-pieces to keep the action moving. As such, The Polar Express tends to be constructed around various incidents – stopping the train for the lonely boy; a bizarre musical number with dancing espresso waiters; the encounter with caribou on the track; the boy trying to stop the conductor throwing the girl off; the sequence where the girl’s ticket blows away and is caught up by all manner of objects before blowing back into the train; the encounter with the hobo; the dropped lever; and especially an exhilarating seat-edge  sequence with the train skidding off its tracks and going sliding out across the ice. Though these sequences seem episodic, there is a beautiful sense that runs throughout the film of being on a genuinely magical adventure.

The Polar Express is less interesting in the second half when it arrives at the North Pole and the running around various parts of the city, elf factories and into Santa’s sack hold less a sense of exciting adventure than they seem conducted to show off the fabulous artificial sets. At least the design of the North Pole in these scenes is stunning – where the production designers have construed the world as something akin to a giant 1920s styled Grand Hotel filled with huge arches, ceilings, quasi-Victorian architecture and pneumatic tubes.

One must also commend Robert Zemeckis for resisting the clichés of the Christmas film – of having elves taking slapstick pratfalls every time they turn up on screen, of turning the North Pole into another wacky absurdist realm like something out of Willy Wonka and the Chocolate Factory (1971). I must admit that I am not a big fan of Christmas fantasies, of which Hollywood feels the need to turn out at least one every other Yuletide season. However, The Polar Express is one occasion where my inherent bah humbuggary was swept away at the loveliness of the fantasy that Robert Zemeckis conjures up. The Polar Express is whichever way you look at it – technically, artistically, in terms of all the expected plaintive emotion of seasonal family entertainment – a magical film.

Robert Zemeckis subsequently went onto direct two other films in the same animated motion capture process with his adaptations of Beowulf (2007) and A Christmas Carol (2009), plus other works that heavily integrate motion capture such as Welcome to Marwen (2018) and Pinocchio (2022). Zemeckis also produced the motion capture animated Monster House (2006), Mars Needs Moms (2011), Real Steel (2011) and Finch (2021).