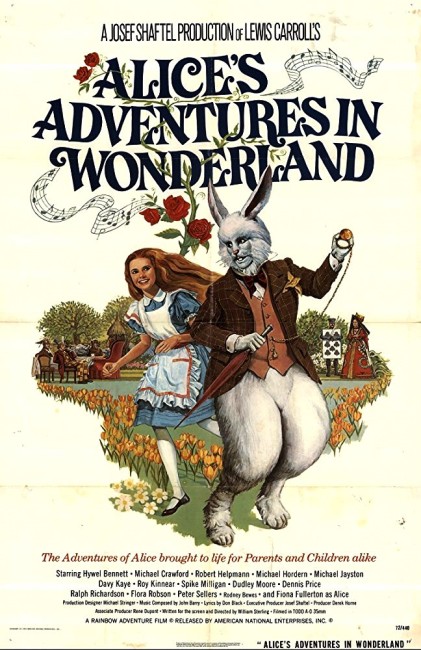 On a picnic with her sisters and the Reverend Dodgson, young Alice falls asleep as Dodgson starts to tell them a story. In her dream, Alice follows a white rabbit down a hole into a bewildering world of strange talking animals and nonsense rhymes.

Lewis Carroll’s Alice’s Adventures in Wonderland (1865) has always been a story that works to variable effect on the screen. Earlier versions – particularly many of the tv versions – seem lumbering in trying to leadenly imitate the nonsense absurdity of Carroll. On the other hand, some of the adaptations that have worked cinematically – like the live-action Alice in Wonderland (1933) and the Disney animated version Alice in Wonderland (1951) ended up being hated by Lewis Carroll purists for the liberties taken with the material.

This version succeeds not too badly. Lewis Carroll’s nonsense ditties are made to work reasonably effectively in dialogue and song. Fifteen year-old Fiona Fullerton – she appeared thirteen years later as a Bond girl in A View to a Kill (1985), would one believe – makes for a intelligent, nicely self-possessed Alice as she goes through an amusing range of quizzically deadpan “Oh dear”‘s.

Elsewhere it is the same collection of star names in costume that seems to be the customary thing for these live-action Alice in Wonderland adaptations. Some of the faces present such as Spike Milligan transcend the latex, while others like Peter Sellers and Dudley Moore seem completely buried by it. The Red Queen costumery is good but the animal costumes have a habit of revealing themselves as only painted rubber humps whenever the characters start dancing. The painted flats of the backgrounds tend to wear on the eye after awhile.