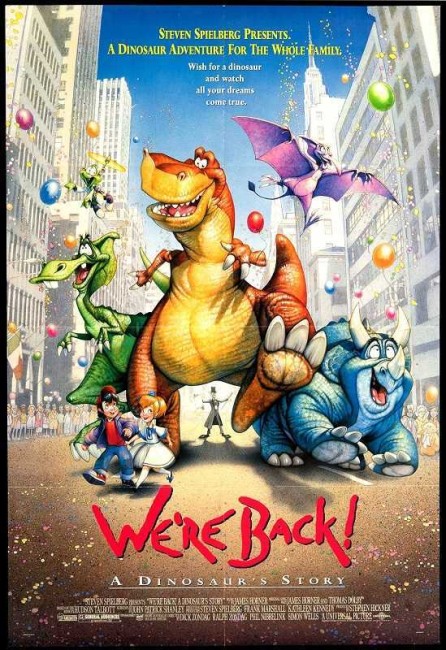 Rex, a golf-playing dinosaur in the present-day, tells the story of how he came to be there. The scientist Captain Neweyes had invented the Dream Radio, a device able to read the dreams of young children. From this, Neweyes learned that many children dreamt of seeing dinosaurs. And so he travelled back to prehistory with his invention Brain Gain, a cereal that increases the intelligence of animals to human level. He increased the intelligence of several dinosaurs, including Rex, and brought them back into the present-day. However, the dinosaurs were captured by Neweyes’ evil brother Professor Screweyes who had invented the Fright Radio, which could read children’s nightmares, whereupon they were given Brain Drain, a cereal that can turn the dinosaurs back into monsters.

There could well be some truth to We’re Back: A Dinosaur’s Story‘s assertion that children dream of dinosaurs. Certainly, Steven Spielberg’s Amblin production company believe so – this is the second children’s film about dinosaurs they have made, following Don Bluth’s The Land Before Time (1988). Furthermore, co-director Ralph Zondag later went onto helm Disney’s Dinosaur (2000). Of course, We’re Back also came out five months later the same year as Spielberg’s live-action mega-hit Jurassic Park (1993), which featured a massive marketing campaign, a large part of which was aimed at children.

We’re Back: A Dinosaur’s Story starts with a promising idea – that of dinosaurs that have had their intelligence raised to human levels. It is probably too much to ask that a film like this would ever deal with such an idea in any interesting way; it is only a means whereby the dinosaurs can be allowed to talk. Certainly, the film pays more lip service to the issue of dinosaur intelligence than the highly anthropomorphised likes of The Land Before Time and Dinosaur do but that does not excuse the disappointing level the rest of the film operates at.

The other ideas in the film are puerile – the dream radio and the villain are all down about the five-year old level. All the film does is use its intelligent dinosaurs as comic fodder – there is a long and ridiculous sequence in the middle of the film set in a parade with the dinosaurs dancing to rock numbers and a slapstick chase with them running around on motorcycles and hurtling down into the subway and through a train.

The film deals in simplistic feelgood messages to a greater extreme than any Spielberg film to date. This is no more clearly demonstrated than the transformation the central character Rex makes – when we first see him in the prehistoric era and when he is later turned back into a monster, he is an accurately rendered tyrannosaur, a vicious predator drawn in low angles looking upward to emphasise his monstrousness; but after the ingestion of the Brain Gain cereal he suddenly undergoes a complete physical transformation into a cuddly figure, big (but not towering) and drawn in rounded unthreatening curves. The film’s feelgood message that simplistically nice feelings will always win out is never more ridiculously rendered than during the climax where Rex is able to make a spontaneous change back from predator to cuddly creature and affect his own brain size expansion by someone simply being nice to him.

The film’s coda also paints over some of the issues it raises in an ugly way – the two children are reunited with their parents, with the film reinforcing the message that such is a good thing, despite the fact that both children give evidence of coming from strongly dysfunctional families – one had to run away from home and the other was ignored and left unsupervised in an apartment building – and without any attempt to address the issues behind this. Equally absurd is the wrap-up of the framing story where the baby bird is able to stand up to his bullying siblings and make things right simply by blowing a raspberry at them. That the film has a very short running time should be regarded as a plus.