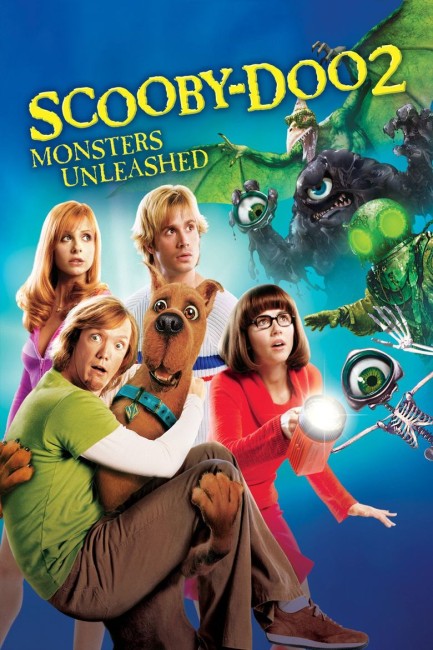 A museum is about to open in Coolsville, displaying the monsters fought by Mystery Inc. At the gala opening, the exhibition is invaded by a masked figure who unleashes a pterodactyl ghost, causing chaos. Officious newswoman Heather Jasper Howe twists comments made by Fred to blame Mystery Inc for the disaster. Shaggy and Scooby Doo take the blame personally and determine to prove themselves to the others as detectives. Together the team try to find the identity of the masked figure and stop them as they activate a device that brings all the monsters fought by Mystery Inc back to life.

Scooby Doo 2: Monsters Unleashed is a sequel to Scooby-Doo (2002), the live-action adaptation of the Hanna-Barbera animated series Scooby Doo, Where Are You? (1969-72). Although Scooby-Doo was universally trashed by critics and fairly much all audiences past the age of puberty, it was a box-office success, one of the Top 10 grossing genre films of the year. The four principal actors reunite under the same director and screenwriter for the sequel.

The good thing that one can say about Scooby Doo 2: Monsters Unleashed is that it is at least a better film than Scooby-Doo was. The first film had a routine plot – Monsters Unleashed ups the scale of the action and throws in some lavish effects and much more elaborate slapstick sequences, while also giving the one-dimensional characters something that vaguely approaches development – Shaggy tries to prove he is more than a goofball, Velma gets a romance.

On the other hand, Monsters Unleashed is exactly like Scooby-Doo in that it has no ambition past being a no-brain popcorn film, featuring dumb characters and a good deal of inane slapstick. There are some polished effects and slapstick sequences – foolishness with a haunted suit of armour in a an old dark mansion; Shaggy and Scooby, dressed respectively as a swinger and an Afrod dude, entering a bar of lowlifes; Shaggy and Scooby surfing down a hillside on metal discs pursued by a skeleton creature; an extended last third running around taking on various ghosts; Scooby’s climactic surfing into the action on a CO2 fire extinguisher that bizarrely develops the ability to freeze a tar monster (in actuality, CO2 extinguishers puts fires out by smothering the oxygen they need to breathe, not by freezing the air).

As with the previous film, the two actors that stand out are Matthew Lillard and Linda Cardellini. Even more than the last time, the two actors who are supposed to play the lead characters from the series – Sarah Michelle Gellar and Freddie Prinze Jr (in real life, husband and wife) – give the impression of being bored – who knows maybe they were having a marital spat at the time?

In the end, watching Scooby Doo 2: Monsters Unleashed is exactly like the junkfood that is sold in the foyer of the theatre – it is has been put there for no other purpose than sucking up your money, offers light sustenance but zero nutritional value, and proves to be nothing more than a taste in the mouth that remains in the memory precisely as long as each individual scene lasts and is forgotten the moment one exits the theatre.

The live-action Scooby-Doo saga was continued with two further films Scooby-Doo! The Mystery Begins (2009) and Scooby Doo: Curse of the Lake Monster (2010) with a different director and younger cast. Scoob! (2020) was an animated film revival.