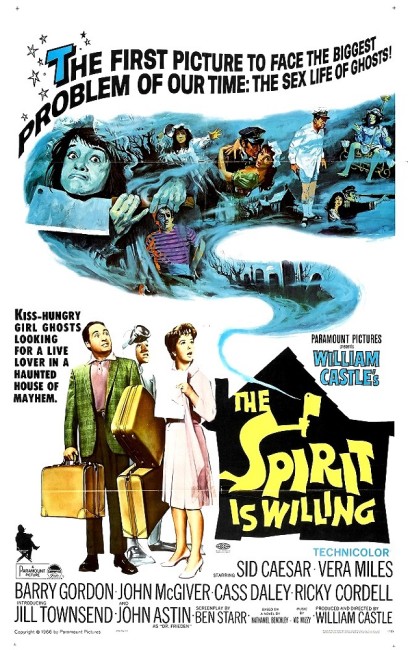 New England, 1898. Sea captain Ebenezer Twitchell is persuaded to marry the homely Felicity by her wealthy father on the promise of inheriting his estate. After the marriage, Ebenezer is tempted by the pretty young servant girl Jenny Pruitt. When she catches them together, Felicity kills them both with a meat cleaver, not before Ebenezer manages to kill her too. In the present day, assistant editor Ben Powell finds the Twitchell house going cheaply and rents it, moving in along with his wife Kate and precocious teenage son Steve. It is not long before the ghosts of Ebenezer, Felicity and Jenny emerge and begin causing mischief.

Producer-director William Castle (1914-77) made a name for himself in the late 1950s with films such as Macabre (1958), House on Haunted Hill (1959), The Tingler (1959) (1959) and 13 Ghosts (1960), which he promoted using sensationalistic gimmicks, including wiring the seats to give audiences electric shocks and winching a skeleton across the theatre in the midst of the screening. Into the 1960s, Castle abandoned gimmicks and turned to making Psycho (1960) copies, with the likes of Homicidal (1961), Strait-Jacket (1964) and I Saw What You Did (1965). Around the end of the decade, Castle began to peter out of ideas as a director and never found anything else that caught on with audiences. Instead, he retired from directing for the larger part and became a producer, where he most famously made Rosemary’s Baby (1968).

During this period, William Castle varied from his usually more straight-faced horror fare to make this ghost comedy. The Spirit is Willing feels like a comedy that should have been made in the late 1930s, around the time of films like The Ghost Goes West (1935), Topper (1937) and The Cat and the Canary (1939). It is a none particularly riotous affair, with Castle rambling with an amiable looseness over a series of repetitive gags. The opening is a tongue-in-cheek grisly rondeaux of axes in the back, which seems a promising farce parodying Castle’s usual fare B horror fare, but this is something that the rest of the film never holds up to.

Sid Caesar coasts through the show with an expression of smug amusement and Barry Gordon delivers a performance of considerable obnoxiousness. Jill Townsend is likable in three different roles – as the murdered ghost maid, a modern descendent and her sister. Things are certainly helped along at times by a jaunty score.

William Castle’s other films of genre note as producer-director are:– as director of Crime Doctor’s Manhunt (1945), the sixth in a series of Columbia crime thrillers, of which Castle directed several, featuring a forensicologist against a split-personalitied killer; the psycho-thriller Macabre (1958); House on Haunted Hill (1959); the classic The Tingler (1959), probably Castle’s best film; the haunted house film 13 Ghosts (1960); the psycho-thriller Homicidal (1961); Mr. Sardonicus (1961) about a man with his face caught in a grotesque frozen smile; the juvenile comedy Zotz! (1962) about a magical coin; the remake of The Old Dark House (1963) for Hammer; the Grand Guignol psycho-thriller Strait-Jacket (1964) with Joan Crawford; The Night Walker (1965), a psycho-thriller about a dream lover; the prank phonecall psycho-thriller I Saw What You Did (1965); the psycho-thriller Let’s Kill Uncle (1965); the reality-bending sf film Project X (1968); as producer of the classic occult film Rosemary’s Baby (1968); as producer of the anthology series Ghost Story (1972-3); Shanks (1974) with Marcel Marceau as a puppeteer who can resurrect the dead; and as producer of the firestarting insect film Bug! (1975).