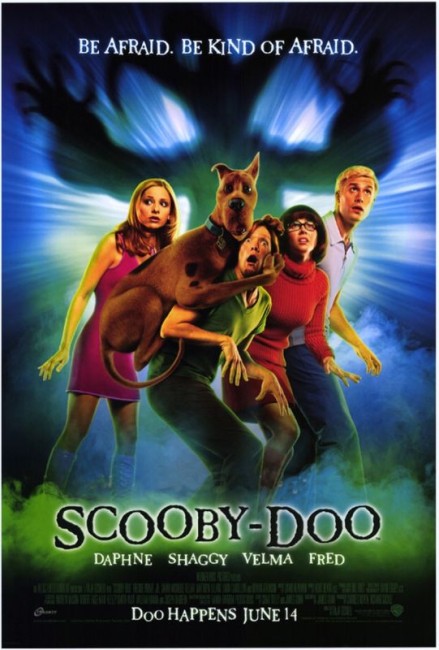 The ghostbusting team Mystery Inc, comprised of the vain Fred, the fashion-conscious Daphne, the brainy Velma and the laidback Shaggy and Shaggy’s best friend, the Great Dane Scooby Doo, break up after differences within the group. Two years later, each of them is separately brought back together by Emil Mondavarious, the owner of the horror-themed Spooky Island, who is trying to find why visitors to Spooky Island are returning mysteriously changed. As the team uncovers the forces at work, they find a sinister fate in store for them.

Most of these have not been critical successes. The crucial problem with the majority of these films is that their sole novelty lies in seeing the cartoon played out in live-action. The films usually have a great opening week after which interest flags off as soon as the initial novelty wears out. They rarely stand up as plots or even with any substance – these films are bubblegum pop, they come filled with inane slapstick gags and contemporary culture in-jokes pitched at the preadolescent demographic that the original cartoon was made for. Indeed, it may well be that most of these cartoon films fail because they are too accurate a facsimile of their originals. Cartoons operate on simplistically reduced notions of character and drama, which usually translates poorly to film.

Hanna-Barbera’s original Scooby Doo, Where Are You? (1969-72) was a popular hit. The series‘ original run was followed by several revivals, a number of tv specials and over 35 dvd-released animated films. The series was essentially a light-hearted take on teen mysteries with ghosts added to the mix – sort of a Nancy Drew’s Haunted House Ride. Scooby Doo was an inanely trivial series – the plots were banally simplistic and the exercise only got by on its good-natured amiability. This film at least accurately captures the look of the characters, the light knockabout shenanigans and the slim, unchallenging plots.

Alas, Scooby-Doo is not very good. It plays out in a way that seems determined to not engage on any intellectual level whatsoever. There is nothing to it beyond much running around and slapstick antics with a big, dumb CGI dog. The low point of the film is surely a farting/belching competition between Shaggy and Scooby Doo. Conducted as two-dimensional animation in Hanna-Barbera’s characteristically limited style, this would have sufficed as a kiddie pleaser, up on the screen being enacted by adults it looks very forced – all it is is a one-dimensional, no-brain film trying to look like a one-dimensional, no-brain cartoon.

The characters have little depth beyond one-word descriptions – Shaggy is a stoner, Fred is dense, Daphne is vain, Velma is brainy. Matthew Lillard at least performs Shaggy with great enthusiasm, although the best performance is actually from the least known cast member Linda Cardellini, who makes a pertly sexy Velma. The others only look like contemporary teen idols uncomfortably trying to act out the parts of cartoon characters, especially so in the case of an unconvincingly blonde Freddie Prinze Jr.

The sequel was Scooby Doo 2: Monsters Unleashed (2004), reuniting director Raja Gosnell and the rest of the cast. There was two further films in live-action with Scooby-Doo! The Mystery Begins (2009) and Scooby Doo: Curse of the Lake Monster (2010) with a different director and younger cast. Scoob! (2020) was an animated film revival.