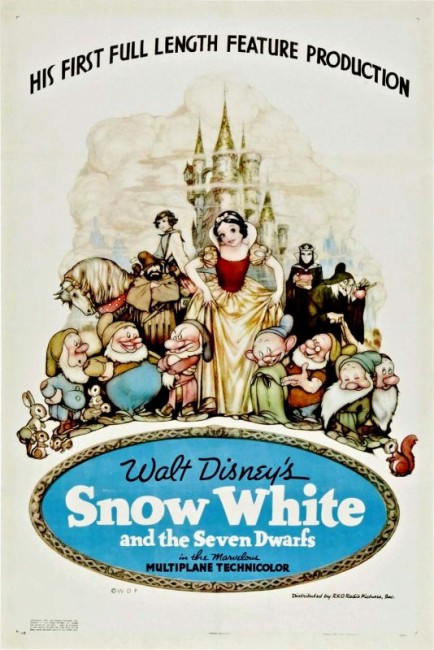 The Queen is obsessed with her own beauty and continually asks her magical mirror who is the fairest in the land. One day the mirror replies that not she but the princess Snow White is the fairest. The Queen orders a woodsman to take Snow White out into the woods and kill her. However, the woodsman cannot bring himself to kill Snow White and lets her go. Fleeing through the forest, Snow White comes across a cottage where seven dwarfs live. She offers to cook and clean for them and they happily accept her into their midst. When the magic mirror informs the Queen that Snow White is still alive, The Queen comes searching for her disguised as an old hag, offering her an apple dipped in poison.

A great deal has been poured into Snow White and the Seven Dwarfs – the reason it was nicknamed ‘Disney’s Folly’ was not just because animation had been untried at feature-length before but more because it was made on a budget of $1.48 million back in the days when this was a very large sum for a film’s budget. Walt Disney, although uncredited, was the overall producer and pursued his vision of what the film should be with a relentless perfectionism – Snow White was one of the few films made in colour when even live-action films of the era were being made predominantly in black-and-white.

Just how much a leap Snow White and the Seven Dwarfs represents can be seen by contrasting it up against Disney’s Steamboat Willie (1928), made less than a decade earlier, with its black-and-white film stock and crudely synchronised sound effects. The final film was a huge success and took animation away from the cute childish novelties of Disney’s Donald Duck and Mickey Mouse shorts to show that it could be crafted at feature length, for adults and, as later Disney films of the era such as Fantasia (1940) showed, even as high art.

Snow White and the Seven Dwarfs is still periodically revived and has dated little. Even though all the aspects of the Disney formula had not been formed at the time, many of them are instinctively grasped – the cute and cuddly sidekicks, the naive and pure-hearted heroine, lots of anthropomorphic animals, the evil witch.

Snow White is probably the ultimate blushingly innocent, virginal fairytale heroine ever created. Disney appears to have deliberately created her as pre-pubescent – she is completely flat-chested, although is old enough to be conducting a romance with the prince. She is so virtuous that she even says her prayers before going to bed at night. Adriana Caselotti, who provides Snow White’s voice, has an amazingly high-pitched register.

There is not a great deal of plot to the film – it is rather simplistic. The dwarfs are played for a little too much slapstick – some of their scenes, notably the washing-up ones, go on far too long, although there is an amazingly lively dance sequence. However, the animal scenes are adorable. Snow White is cast as a St Francis of Assisi of sorts to whom woodland animals are naturally drawn. The scenes as the animals help her clean up the house – licking plates, a tortoise used as a washboard, twittering birds snuffing candles with their tails and pulling bedsheets up and so on – are wonderfully cute. So too are the cooking scenes with birds carrying away the overcut of pastry, sprinkling flour from their tails, using their claws to imprint the crinkles around the edge of the pie.

Equally so the film uses the sense of anthropomorphism to threatening effect. Some have described the images in Snow White and the Seven Dwarfs as among the most terrifying memories of their childhood. Snow White’s flight through the forest is the perfect evocation of childhood shadows-under-the-bed nightmares with branches appearing to become claws, blowing leaves seen as swarms of bats, logs becoming crocodiles and trees grasping monsters. The film is a genuine classic.

Snow White and the Seven Dwarfs was later spoofed in Disney’s Enchanted (2007). Snow White makes a cameo in Ralph Breaks the Internet (2018), while the tv movie Descendants (2015) about the children of Disney villains featured The Evil Queen’s daughter.