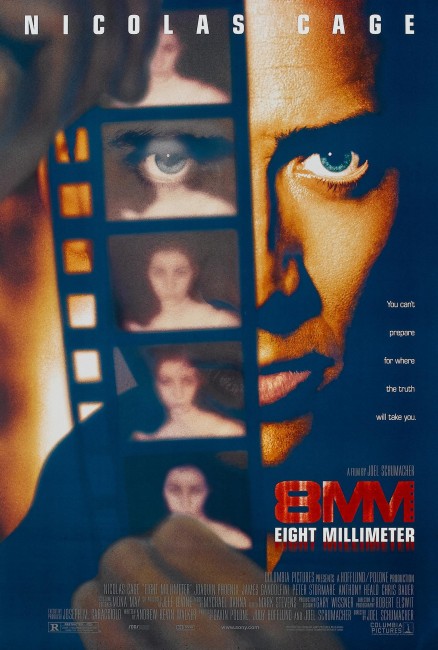 Private investigator Tom Welles is hired by the widow of a recently deceased millionaire. She has discovered an eight-millimeter movie among her late husband’s personal items that depicts the apparent torture and murder of a teenage girl. She asks Welles to ascertain if the film is real or a fake and if the girl is still alive. The resulting journey takes Welles into the dark underbelly of the L.A. and New York pornography trade in search of possibly non-existent filmmakers who specialize in snuff movie-making.

Andrew Kevin Walker wrote the screenplay for Se7en (1995), one of the most extraordinary films of the 1990s. While at face value it was a serial killer thriller that employed the new model of forensic psychology that had been popularised by the immensely successful The Silence of the Lambs (1991), what made Se7en was Andrew Kevin Walker’s ability to extend the killer’s Seven Deadly Sins motif into a stunning metaphor that looked deeply inside the moral decay of society.

8MM was Andrew Kevin Walker’s follow-up script to Se7en. The two films have a number of similarities. Both are written in the guise of detective stories – 8MM concerns itself with trying to track down and authenticate the existence of a snuff movie, while Se7en centred on trying to track down a serial killer. More importantly, in both films Walker inflates what any other writer may have left simply as a mere thriller story into a looming apocalyptic metaphor for the moral decay of society. With such a thematically preoccupied body of work, Andrew Kevin Walker briefly seemed to be in line for establishing himself as a cinematic poet of fin du siecle dis-ease.

Another filmmaker who likes these Heart of Darkness journeys is David Lynch – his Blue Velvet (1986) was about a descent into sadomasochism and his tv series Twin Peaks (1990-1) was about the corruption of a cheerleader beneath the veneer of smalltown virtue. These films create almost sentimentally normal visions of classic Middle American nuclear family life, seeing it being defended as a bulwark against the horrors that lie beyond its door – Blue Velvet opens on a hyper-real depiction of white picket-fenced suburbia; Hardcore contrasts the seedy porn underworld with its homelife of a staunch Calvinist; even Se7en contrasted the horrors of its killer against the heartbreakingly plaintive innocence of Gwyneth Paltrow’s wife trying to cope in a bleak urban environment.

The most potent expression of these polarities of light and darkness came in tv’s Millennium (1996-9), which was considerably influenced by Se7en, wherein we see a vision of a man who must confront horrors on a daily basis who is clinging to his family as some type of hope and sanity, a dream even his wife admits is an impossible one. (An almost identical theme – the image of the serial killer tracker clinging to her daughter against the madness outside – is echoed in the forensic psychology thriller Profiler (1996-2000), which appeared at the same time as Millennium).

8MM is no different. Director Joel Schumacher emphasizes contrasts with the normalcy of the life that Nicolas Cage is clinging to – his wife and sleeping baby child – or images such as the killer Machine’s mother?/wife? going off in a church bus; the plaintiveness of the belongings left behind by the missing girl; the girl’s mother’s pained attempts to cope with the loss and her descent into alcoholism. In any other film – a feelgood family drama, for instance – these are images that would seem overly sentimentalised. And, like Blue Velvet, Se7en, Millennium, Profiler and other similar works, 8MM also adopts what has almost become a standardised lighting scheme for this type of film – a perpetual gloom where the whole world seems to be lit by candles, the use of grainy film-stock, disjunctive camera shots and flickering, blurred, often subliminal editing.

Reviewers at the time jumped up and down in kneejerk reactions and called 8MM sordid and wilfully unpleasant. To the contrary what they seemed to fail to see was that 8MM is a highly moralistic film. The disappointing thing about 8MM and most of the above cited efforts is that they take a conservative attitude to the material. Mute Witness and the later mockumentary efforts may be the sole exception but both 8MM and Hardcore highlight the concept of snuff movie-making to spearhead a conservative attitude towards pornography. That is to say that they view little difference between hardcore pornography and between S&M and child pornography and ultimately snuff movie-making. They hold the view that the difference between is only a matter of steps along a continuum, that all are ultimately part of the same decay of moral social fibre. To place all in the same boat by association is the same argument that says that casual marijuana use leads to hard-drug addiction or that horror movies inspire real-life violence.

Even more so than his stance on pornography, 8MM ultimately shows up Andrew Kevin Walker as holding a conservative position regarding the horrors he envisions. That is the tendency to view acts of psychopathology in terms of moral labels such as ‘evil’ and the rigid insistence that such behaviour is solely the choice of the psychopath. Again, this is a theme has run through nearly every film since The Silence of the Lambs. Irrespective of the fact that The Silence of the Lambs has employed and popularised the use of forensic psychology, it and its body of imitators tend to view the psychopaths within their stories less in terms of psychological circumstances and more in terms of human evil.

This is evident in The Silence of the Lambs with its cannibal killer whose reasons are aesthetic and who is cast as a calculating genius whose motivations exist beyond mere psychological explanation. Ditto the killer Jack of All Trades in Profiler. There are numerous other examples – Brad Pitt’s killer in Kalifornia (1993) who spits on David Duchovny’s attempts to explain his motivation in terms of psychology and says it is all choice; Millennium, which attributes the increasing presence of killers to some mystical millennial nightfall wherein evil everywhere is emerging; Se7en with its killer defying forensic psychological patterns and demonstrating his actions in terms of Biblical morality.

This expression is at its most potent in 8MM where all we learn of the dead billionaire’s reasons for ordering a snuff movie made are “because he could,” or where the killer Machine is given a climactic soliloquy: “I wasn’t beaten, I wasn’t abused. Daddy didn’t rape me. There’s no mystery. The things I do, I do because I like them, because I want to.”

Like most of the films listed above, 8MM is run through with a conservative inability to understand how depraved and disturbed actions could be psychologically possible. Despite the employment of forensic psychological techniques, most of these films want to take a moral critique of serial killers. That is to say they wish to draw a dividing line between the killers and the actions of ordinary people. The real reason for psychopathic behaviour is rarely anything to do with genius and a choice between good and evil, but rather it is about sad individuals enacting a pattern of systematic childhood abuse. What conservative thought has a difficulty understanding is the lack of a real dividing line between the behaviour of people who do and people do not engage in these acts. Conservative choice wants to insist that killers have an innate ability to appeal to such nebulous notions as conscience, that they “know” what they do is wrong. Whereas in actuality psychopathic behaviour shows individuals repeating patterns of behaviour simply because they know no different. The appeal to conscience holds an unwillingness to see that disturbed behaviour grows from the very same ground that ordinary and socially acceptable behaviour is also rooted in. Behind this is the same kind of moral argument that insists that alcoholism, addiction and poverty are all down to people’s choice – not to deny that it can be to a large extent – but the way the argument is wielded is one that refuses to see any wider sociological implications or responsibilities for the causes of such by society or other individuals.

Despite its conservative moral agenda, 8MM is not a poor movie by any means. It is a disappointing one though, coming as it does in the shadow of the superb Se7en. It does reveal Andrew Kevin Walker as having a conservative social standpoint far more undisguisedly than Se7en did where such obviousness was hidden by the dexterity of Walker’s plotting. That said, there are some excellent passages of writing – the killer Machine’s aforementioned soliloquy works nicely and there is a heart-breaking scene where Nicolas Cage asks the missing girl’s mother whether she would want to know the horrible truth or whether she would want to go on hoping that her daughter has a better life somewhere. Walker’s strengths are always in contrasting the horrors with a potently and often poignantly written human element. (Perhaps one should not lay the film’s shortcomings too much at Andrew Kevin Walker’s feet as he reportedly left after creative differences and his script was subsequently reworked by director Joel Schumacher).

Beyond its conceptual failings, 8MM has the large liability of being shackled with director Joel Schumacher. Joel Schumacher is in this author’s opinion the most incompetent director working inside the fantastic film genre today. Schumacher’s first film was The Incredible Shrinking Woman (1981), which still remains his best film. Other entries included The Lost Boys (1987) and Flatliners (1990) where Schumacher emphasized MTV-driven atmospheric flash and posed style over substance, logic and overwhelming plot holes. Schumacher then made the vile Falling Down (1993), a film that pandered to the redneck element of an audience in celebrating the actions of a character who takes armed action against petty bureaucrats, racial minority and economically disadvantaged groups. In between adaptations of two John Grisham airport best-sellers – The Client (1994) and A Time to Kill (1996) – Schumacher inherited the Batman movie franchise from director Tim Burton and in his two entries – Batman Forever (1995) and Batman & Robin (1997) – succeeded in reducing Burton’s brilliant, scintillatingly dark comic-book universe to the level of a two year old’s cartoon show. Batman & Robin is without any doubt the worst A-budget genre movie made in the entirety of the 1990s. Schumacher subsequently went onto make the psycho-thriller Phone Booth (2002), the film of the musical The Phantom of the Opera (2004), The Number 23 (2007) featuring a numerologically obsessed Jim Carrey and the Nazi vampire film Town Creek (2009).

The good thing that one can say about 8MM is that it works efficiently as a film in spite of Joel Schumacher. Schumacher adopts the washed-out, heavily shadowed look of Se7en, Millennium et al. However, this is no different from the way that Schumacher has grafted meaninglessly affected style for its own sake onto other films like The Lost Boys, Flatliners and Batman Forever.

The good thing is that Schumacher is able to restrain his stylistic excesses and that Andrew Kevin Walker’s good writing is capable of carrying Schumacher’s indifference to good or bad plotting for the film to work efficiently enough. There are patches 8MM does not work – Peter Stormare is allowed to overact badly and there is a peculiar score that seems to swing between the oppressiveness of 1940s film noir scores and bizarrely inappropriate Arabic dirge music – but mostly it does work. That said, the failing that one can accuse 8MM of is that it is merely an effective film but never an absorbing or gripping one.

(Winner for Best Cinematography at this site’s Best of 1999 Awards).