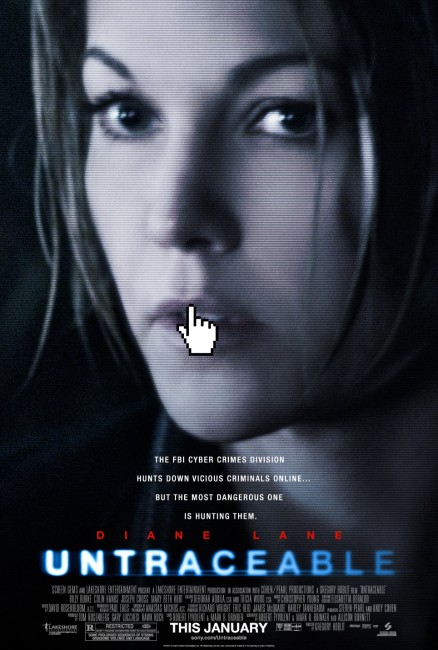 Jennifer Marsh is a cybercrime specialist with the FBI in Portland. She becomes fascinated with the website killwithme.com, which displays a live feed of a cat being killed. Her superiors do not consider this enough to take any action. The site then puts up a new feed that shows an imprisoned man being injected with poison where the poison is fed faster the more people that log into watch. As they try to shut down the site, they find that the anonymous webmaster has set up an ingenious series of technical gimmicks that prevent them from doing so. A further victim is abducted and then fried in front of a set of heat lamps. The killer then starts to turn his attention to them, abducting Jennifer’s colleague and then coming after her and her daughter.

At first glance, Untraceable seemed like another serial killer thriller in the vein of The Silence of the Lambs (1991). Perhaps The Silence of the Lambs crossed with a hacker thriller like The Net (1995). Although in watching Untraceable, the film that one is reminded of more than any of these is 15 Minutes (2001), an hysteric rant about media sensationalism that masqueraded as a psycho-thriller. Untraceable likewise uses the guise of a psycho-thriller to take to task modern media sensationalism and the dangers of the internet.

Director Gregory Hoblit fills the film with scenes designed to highlight the more morally dubious areas of internet usage. As the film opens, Diane Lane and Colin Hanks are monitoring music download and porn sites and, as we watch, a dummy computer is taken over by malware that hijacks her passwords. There is the constant threat of invasion of personal privacy – the villain of the show makes a habit of hijacking and using people’s online accounts, while in the opening scenes Diane Lane tracks a man who has piggybacked in on a neighbour’s wireless network. Elsewhere, there is a visit to a suspect that engages in movie piracy, while one of the victims specialises in uploading material to shock and sensationalism sites. Even Diane Lane’s home computer is hacked by the villain after her daughter downloads an innocent game that contains a trojan virus.

The majority of these scenes do not appear to be there to convey the main plot, rather to illustrate a point the filmmakers seem determined to beat with a drum that the internet is a place lurking with unsuspecting dangers. Untraceable seems like a film that is written either by a wildly alarmist luddite or a person who wishes to push an agenda for censorship of the net. At no point does anybody present in the film ever seem to use the net for anything enjoyable or productive. Even when Colin Hanks is engaged in browsing internet dating sites, the film is busy remonstrating the old hat view that nobody one is talking to is who they ever seem to be. Even when he does get a date with a nice girl, she has her identity improbably impersonated by the villain using voice replication software.

The latter sections of the film detract off the dangers of the internet to deliver a message about how sleazy and sensationalistic modern media has become. At one point, Billy Burke turns to Diane Lane and asks “When did the world go so insane?” The implication being that this media sensationalism and the various depictions of danger lurking on the internet that we have seen throughout are all symptoms of social moral decay. Untraceable feels like the ill-informed rant of an old person who is unable to understand why the familiar world they once knew has become unrecognisable and can see only imminent signs of the apocalypse in everything around them. If this is Hollywood’s answer to the vexing issue of download piracy, it comes with portentous harbingering that is down at the level of credibility of the local crazy walking about with a sandwich board proclaiming “the end is nigh.”

Untraceable is directed by Gregory Hoblit who emerged from television, having worked as a director and producer on acclaimed shows of their day such as Hill Street Blues (1981-7), L.A. Law (1986-94) and NYPD Blue (1993-2005) where he won a number of awards. Hoblit made his feature film debut with the legal thriller Primal Fear (1996), which won considerable acclaim in large part due to a captivating big-screen debut from Edward Norton. Hoblit then went onto other works such as Fallen (1998), Frequency (2000), Hart’s War (2002) and Fracture (2007).

Even outside of its rather hysterical subtext, Untraceable is a disappointing thriller, especially for Gregory Hoblit whose other works have always been above average. One goes to see a thriller to be surprised – for something unexpected to happen, to be thrown into situations where a genuine sense of menace is relayed. Contrarily, everything here seems eminently predictable – Colin Hanks has his fate sealed from the point that the film shows him spending an inordinate amount of time engaged in internet dating; Perla Haney-Jardine is set up as Diane Lane’s daughter solely so that she can be targeted by the killer; and with eminently predictability Diane Lane is abducted and tied up as one of his victims at the climax. There is nothing in the plotting or suspense sequences that feels like one could not see it coming a long way off or being heavily foreshadowed for later in the show.

The irony of Untraceable is that though it loudly decries sensationalism and shock media, it uses these same tactics to promote itself. For a time, Untraceable sits on the verge of being another Saw (2004), offering up a gruesome parade of scenes where we see one victim being fried in front of a set of heat lamps, another with his skin peeling off in a vat of acid (which has conveniently been made transparent so we can see no unspared detail). To his credit, Gregory Hoblit does not dwell on these scenes any more than he need to convey the point and certainly not with the same kind of pornographic relish that Darren Lynn Bousman does in the Saw sequels. However, you cannot help but see the double standards of a film that sets out to chart the evils of media sensationalism and at the same time offers up images of humans being fried alive in order to make its point.