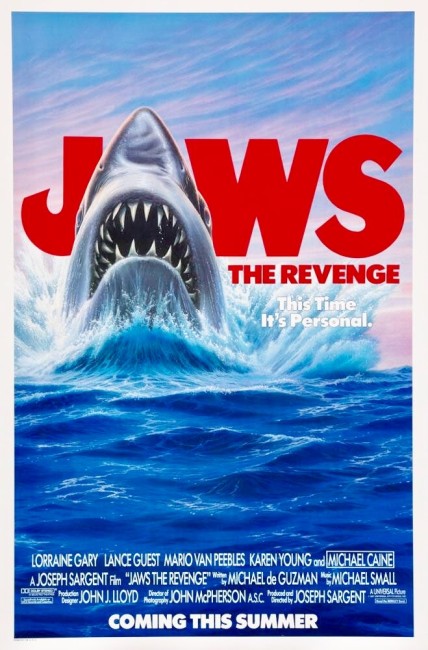 After her youngest son Sean is killed by a shark, Ellen Brody begins to believe that the shark species has it in for the Brody family personally. She goes to Nassau to stay with eldest son Mike, now a marine biologist, in order to recover. But there a shark appears, for the first time in these waters, and starts stalking her.

Jaws: The Revenge was the third of the sequels to Steven Spielberg’s runaway sensation Jaws (1975). The other two sequels were Jaws 2 (1978) and Jaws 3-D (1983). This entry is directed by Joseph Sargent, a veteran director who had mostly worked in tv, including classic series such as Star Trek, The Man from U.N.C.L.E. and The Invaders. (See below for Sargent’s other genre works).

Jaws: The Revenge is regarded by most as the worst of the series, although that is a distinction that surely belongs to the incredibly dull Jaws 3-D. Certainly Jaws: The Revenge is at least an improvement over that, which isn’t saying much. (When you think about it – in some ways these cheaply effective pop-up shocks and the shark’s eye point-of-view camera-work would have made this a far better 3-D film). Sargent manages one or two good chomping scenes – the suspenseful attack on the banana boat, and a surprise scene where the shark leaps out of the water and snatches Mario Van Peebles from a mast. And he is aided by a realistic mechanical shark and beautiful above and below water photography on location in the Bahamas.

But the melodrama back on dry land is strictly a bore. The film was promoted with the intriguing advertising byline “This time it’s personal,” which makes for an interesting idea as to the shark species’ unnatural predilection for the Brody family throughout the series, but the film never takes any steps toward explaining or developing this notion. The ending takes leave of any kind of credibility at all in having both Michael Caine and Mario Van Peebles escape from the shark’s mouth totally unharmed.

Mostly though the Spielberg original is pillaged like a beached whale with its belly open to waiting seagulls – Lorraine Gary has flashbacks to scenes where she wasn’t even present; Joseph Sargent recreates the child-imitating-father scene from the original shot for shot; there’s a climax at sea chasing the shark in a boat that even looks identical to The Orca; and Michael Small goes at John Williams’s der-dum-der-dum score as though he is personally determined to make sure every member of the audience knows it off by heart.

Joseph Sargent is a veteran director of films and tv. His most famous film is probably the original version of the thriller The Taking of Pelham One Two Three (1974). He made a surprising number of works that fall within genre guidelines including One Spy Too Many (1966) and The Spy in the Green Hat (1967), both films patched together from episodes of The Man from U.N.C.L.E.; the computer takeover film Colossus: The Forbin Project (1969); the pilot for the tv series The Immortal (1969), with Christopher George as a man whose blood contains a universal panacea and the secret of immortality; The Man (1972) about the first Black President of the US; the tv movie The Night That Panicked America (1975) about the panic that ensued over the true life Orson Welles War of the Worlds radio broadcast; Goldengirl (1979) about an attempt to genetically engineer an Olympic super-athlete; the tv movie Tomorrow’s Children (1982) about test-tube babies; the horror anthology Nightmares (1983); and the mini-series Space (1985), a fictionalisation of the Space Program.