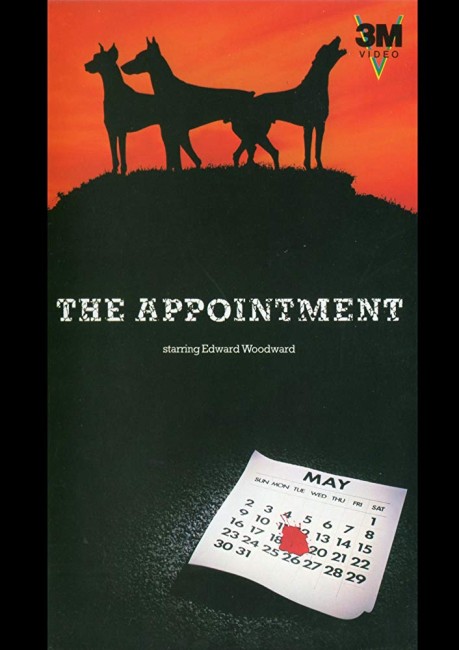 Ian Fowler breaks the news to his fourteen year-old daughter that he cannot attend the concert she is playing in the next day because he must drive to a conference in London, much to her deep upset. That night he has a dream of dogs leaping onto the hood of his car on the road and causing him to crash – and dogs gather outside the house as he sleeps. The next day as Ian sets out on the journey, all the elements of the dream start to fall into place.

This is an obscure but undeniably fascinating British horror film. Like a number of other horror films that reach for artiness, it looks to Don’t Look Now (1973). The film opens with the striking image of the schoolgirl being snatched sideways into the woods by a great unseen force.

Thereafter though, the film seems to wander somewhat. Director Lindsay Vickers fails to draw one into Edward Woodward’s somewhat passionless domestic scenario. The set-up drags at a very slow pace – the camera pans around Woodward’s bedroom and the photos sitting there at great length. There is one scene that seems to go on forever with Edward Woodward debating whether or not to open the door of his daughter’s bedroom. All of which convinces one that they are in for a film whose pretensions have gotten the better of it.

However, to one’s surprise, The Appointment picks up and, before one knows it, one becomes absorbed in its atmosphere. Lindsay Vickers composes long shots creeping around the house and then returns to the bedroom where, with genuine eerieness, a character in one of the photos momentarily moves and the red petals of flowers in a vase fall. The scene then appears to cut to the next day with Edward Woodward on the road to London where he is suddenly forced to skid off the road as dogs leap onto the car – but then, in what manages to be a considerable shock for the use of such a cliche device, he wakes up and this only turns out to be a dream. Outside a pack of dogs circle and enter the house, although when Woodward gets up there is nothing there. Everything is accompanied by unworldly atonal score. This is a remarkably well sustained piece of atmosphere that hovers uneasily between dream and waking and leaves one never sure where they are.

When the journey itself starts the next day, Lindsay Vickers starts to get into his Don’t Look Now games of synchronicity and overlapping symbolism – Edward Woodward’s rental car is slow in starting and when it finally does his own car, which has been left behind in the repair shop also starts up, killing the mechanic underneath it (resulting in the ultra-weird image of blood spurting up through the vehicle’s hood). A truck with dogs painted on the side follows Woodward and causes him to crash – the attacking dogs of his dream.

The crash itself is a remarkable piece of shooting and editing. It is no mere Hollywood slow-motion fall off a cliff-edge and explosion into flames – the skidding is filmed from every angle including down at tire level, while inside one sees in slow-motion apples splattering against the window, Woodward’s briefcase and coat going sailing, and the extraordinary image of the car teetering up in the air balanced on its front tip on the very edge of the cliff for a long moment before falling over.

The coda, which shows the teenage daughter Samantha Weysom feeding the dogs behind an iron grille in the same copse where the first schoolgirl was snatched, even further heightens the puzzling enigma – What does it mean? Are these the dream-world playmates her mother refers to? Did the dogs snatch the schoolgirl at the beginning? Do the dogs do her supernatural bidding? Such wilful enigma proves fascinating.