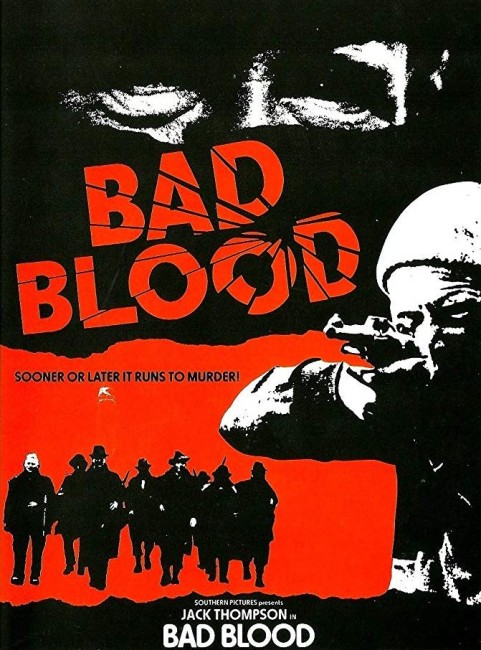 The small town of Koiterangi on the West Coast of New Zealand during World War II. Farmer Stan Graham and his wife Dorothy are regarded as strange by the locals. The Grahams are paranoid, training in the middle of the night for the potential German invasion and believing that the townspeople are poisoning their livestock. When a mandatory order comes for Stan to surrender his rifle for the war effort, he refuses. In the ensuing attempts by the police to take possession of the rifle, Stan shoots several officers. As a massive manhunt is mounted to apprehend him, Stan flees into the bush. There his ability to outwit the authorities instead makes him a local hero.

Bad Blood is based on the true-life manhunt for mass-murderer Stanley Graham that occurred in New Zealand in 1941. The film follows the details of the Stanley Graham story closely – Graham and his wife suffered from severe economic problems on their 40-hectare West Coast farm. Most of these were due to spiralling post-Depression farm loans. Due to the unhygienic conditions of Graham’s milking sheds, the dairy company rejected his milk and Graham began to believe the locals were poisoning his cows. Graham also had a gun fixation and was known to practice target shooting in the middle of the night. Things came to a head when district police called to commandeer Graham’s rifle for the War effort. In the ensuing fracas, Graham shot three constables, escaped into the bush where he remained at large for thirteen days, before finally being shot down. During that time, he killed a total of seven people.

Bad Blood is different to most real-life psycho films. Director Mike Newell takes an unusual step in eschewing the any portrait of inner madness a la Taxi Driver (1976) or of adopting any psycho-thriller structure. Instead, Newell sees Stanley Graham as a creation of the time and the people around him – he and his wife being alienated from the community by their paranoia, which in turn were a creation of their economic hardships.

It is also a film where Mike Newell is fully aware of the ironies inherent – how in standing up to kill so many people and his flight from justice, Stanley Graham ironically became a local hero and how his very act of frustration comes to embody the same values of tough, ruggedness that the small town upholds.

Both Jack Thompson, who stumps around brooding and muttering like an emotionally stunted troll, and particularly Carol Burns, who gives an amazingly hard-bitten and shrewish performance, succeed in coming across as both comically paranoid yet sympathetic people who it can be seen care about one another amid their shared nuttiness.

Newell underplays the film the whole way – the manhunt comes without any type of classic suspense driving. One exceptional aspect of the film is its very ordinariness in terms of capturing the banality of smalltown New Zealand life during the era.

For Mike Newell, an English director of films like Enchanted April (1991), Into the West (1992), Four Weddings and a Funeral (1994), Harry Potter and the Goblet of Fire (2005) and Prince of Persia: The Sands of Time (2010), his ability to capture the very parochialism of 1940s New Zealand is remarkably well attuned.