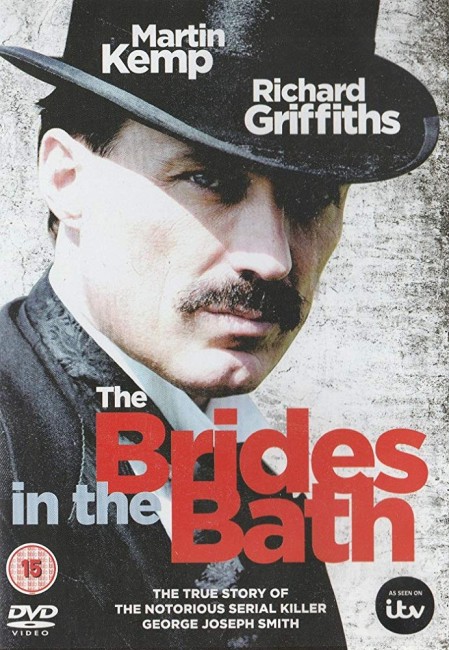 1915. Barrister Edward Marshall Hall is assigned to defend George Joseph Smith who is accused of murdering his wife. During the trial, the story comes to the fore of how Smith married Bessie Mundy, stole her inheritance and even her clothing and then returned and drowned her in the bath. As the trial continues, the prosecution bring out how Smith used a variety of other pseudonyms to marry different women. He always signed them up for sizeable life insurance policies and then called a doctor complaining that they had a fever. Within the next few days, he would drown them in the bath. In all cases, the deaths were medically determined to be accidental, while Smith went on to sell their belongings and cash the life insurance policies.

The Brides in the Bath is British tv movie based on the story of true life bigamist and wife murderer George Joseph Smith (1872-1915). Under a variety of pseudonyms, Smith bigamously married at least seven women between 1908 and 1914, after which he usually stole their belongings and vanished. From 1913 onwards, Smith began to up his game by getting his wives to sign up for life insurance policies and/or sign their inheritances over to him whereupon he would register at a boarding house that had a bath and get the wives to go to a doctor on some pretence of illness a matter of days before he would drown them in the bath. Owing to the lack of struggle evidenced on the bodies, the coroners in all cases dismissed the deaths as ill health. Police began to investigate after a boarding house owner pointed out the suspicious similarity between one of the murders and another that had occurred at their lodgings. It was discovered that Smith was able to drown the wives by snatching their feet unexpectedly and dragging them underwater, thus leaving no sign of a struggle. In 1914, Smith was arrested and charged with the murders of Alice Burnham, Margaret Lofty and Bessie Mundy and was executed by hanging in 1915.

Unlike recent other true life serial killer films – Nightstalker (2002) and Gacy (2003) being two notable examples – The Brides in the Bath follows the George Smith case in exceedingly close detail, right down to maintaining the names of all the principals, even retaining Smith’s various pseudonyms and pieces like the police investigation recruiting trained divers to test out the bath drowning theories. The tv movie is played with a painstaking historical realism.

The role of George Smith is cast with Martin Kemp, the former lead singer of 1980s Brit pop group Spandau Ballet who reinvented his career as an actor in the 1990s. Martin Kemp plays Smith with a dapper, dashing charm that is perfect for the role – one gets a genuine sense of the seductive charisma and persuasiveness that Smith must have wielded over the women he preyed upon.

The killings are all played low key, although there is an undeniable stylish suspense to at least the scene where Emma Ferguson is murdered in the bath upstairs and the mother and daughter below are talking about Dr Crippen (another famous wife murderer around the same period) as water from the bathtub starts dripping on the table, their biscuits and Crippen’s picture in the newspaper. The quiet effectiveness of the presentation is something that makes The Brides in the Bath work rather absorbingly.

Harry Bradbeer is a veteran British tv director. he and Yorkshire tv had earlier teamed for another true crime portrait of a serial killer with A is for Acid (2002).