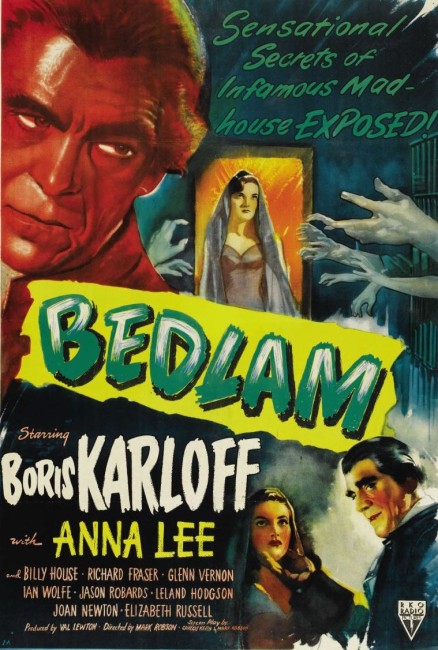 In London of 1791, a popular diversion of the wealthy classes is to go to Bedlam asylum to look at the imprisoned lunatics. When young actress Nell Bowen sees the brutal way the lunatics are treated, she tries to stand up and reform the system. Instead her patron Lord Mortimer and George Sims, the master of the asylum, conspire to have her committed to Bedlam.

In the 1940s, producer Val Lewton made a series of superb horror films at RKO Radio Pictures, beginning with Cat People (1943) and progressing through the likes of The Ghost Ship (1943), I Walked with a Zombie (1943), The Leopard Man (1943), The Seventh Victim (1943), The Curse of the Cat People (1944), Isle of the Dead (1945) and The Body Snatcher (1945). Val Lewton defined a unique style wherein most of his films hung on a point of ambiguity – one where audiences were left unsure whether the horrors and elements of the supernatural were real or in the minds of the characters on screen. Bedlam alas was the last of the horror films made by Lewton at RKO – he was not popular with RKO management.

For his last two films, Isle of the Dead and this, Lewton moved away from psychological horror and into historical subjects. Bedlam was written by Lewton under the pen-name Carlos Keith. Lewton took his inspiration from one of the engravings in William Hogarth’s A Rake’s Progress (1735) series. The series of engravings satirically tells the story of a libertine who stumbles through all walks of British life, which are depicted as equally debauched and lunatic. The final of Hogarth’s eight prints was entitled Bedlam in which Hogarth went into the real-life historical asylum of the same name and drew what he saw. (The word ‘bedlam’, which has gone on to enter the English language to mean madness or cacophony, was bastardized from the name of the priory the asylum building used to exist as – St Mary’s of Bethlehem).

Director Mark Robson had previously made The Ghost Ship, The Seventh Victim and Isle of the Dead for Lewton. Robson goes a long way towards creating sympathy for the inmates in a number of extraordinary set-pieces – the eerie card game played with imaginary money; or the dinner-party, which must have surely have inspired Ian Fleming for the famous scene in Goldfinger (1964), where a gilt-painted boy recites before nobles and is ignored as he expires; and the scene where Anna Lee is placed in a cell with a strangely deferential maddened killer.

Boris Karloff’s performance as the cruel and taunting Master Apothecary is a fine one and Anna Lee is good as Nell. With a complex blend of literary metaphors and historical analysis, this is arguably one of the finest written and most overlooked of the Val Lewton films.

The idea of a remake was bounced around in the 1990s – intriguingly, Martin Scorsese was to have one point produced with Alison MacLean, best known for Jesus’s Son (1999), in the director’s chair. Bedlam is discussed in the documentary Val Lewton: The Man in the Shadows (2007).