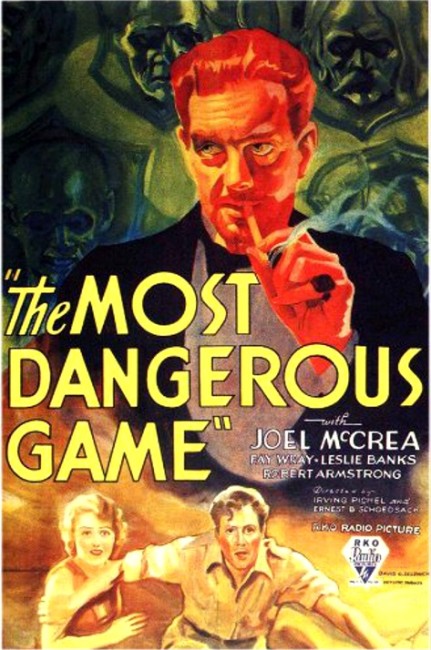 aka The Hounds of Zaroff

Noted hunting writer Bob Rainsford is on a yachting expedition with several friends. Their ship is then wrecked as it travels between buoys that are supposed to be warning of dangerous reefs. Bob is the only survivor to make it past the sharks and ashore on the nearby island. He makes his way to an old Portuguese fort where he is welcomed by Count Zaroff, a Cossack aristocrat displaced by the Russian Revolution. He also meets Eve and Martin Trowbridge, survivors of another shipwreck. Zaroff has a love of hunting. He tells them how he has tired of hunting ordinary animals and now hunts ‘the most dangerous game’. They discover Zaroff’s trophy room mounted with human heads and realise that the ‘most dangerous game’ that Zaroff hunts is people. Discovering them there, Zaroff gives Bob and Eve a single knife and the opportunity to win their freedom if they can survive until dawn as he hunts them across the island.

The Most Dangerous Game is a genuine classic. Count Zaroff’s name might not stand up there alongside other names from the era such as Frankenstein, Dracula, Dr Jekyll, Larry Talbot and Griffin the chemist, but the 1924 Richard Connell short story that formed the basis of this film has fuelled an amazing number of film adaptations since. It was remade several times – as A Game of Death (1945) and Run for the Sun (1956) where, following World War II, Zaroff became a Nazi instead of a Russian aristocrat, and more recently The Most Dangerous Game (2017), as well as exploitation ripoffs such as Bloodlust (1961) and The Woman Hunt (1973).

There have been an amazing number of adaptations on tv in the likes of the Get Smart episode Island of the Darned (1966), the Logan’s Run episode Capture (1977), The Incredible Hulk episode The Snare (1978), The A-Team episode Pros and Cons (1983), the Xena: Warrior Princess episode Dangerous Prey (2001), the Relic Hunter episode Run Sydney Run (2001), the Supernatural episode The Benders (2006), the Criminal Minds episode Open Season (2007) and the Dollhouse episode The Target (2009).

There have several unofficial science fiction translations such as Turkey Shoot (1983), where the concept was transferred into a totalitarian future prison setting; Slave Girls from Beyond Infinity (1987), which moved the story to an alien planet and the prey became bikini-clad bimbos; Predator (1987) and Star Hunter (1995) where Zaroff became an alien huntsman chasing human game; action movies such as Avenging Force (1986), Deadly Prey (1988), Death Ring (1993), The Eliminator (2004), or Hard Target (1993), Surviving the Game (1994) and Happy Hunting (2017) where derelicts and the socially down-and-out are hunted by a rich elite; The Condemned (2007) and Turkey Shoot (2014), which turned the hunt into a reality tv show; Darkweb (2016) where it was about selling snuff videos on the darknet; even The Hunt (2020) that has liberals hunting conservatives.

Of all these versions, The Most Dangerous Game is undeniably the best. It was co-directed by Ernest B. Schoedsak, just one year before Schoedsak would direct King Kong (1933), and actor Irving Pichel. The Most Dangerous Game was made only five years into the sound era and there are aspects that are certainly crude – the score, the photography. Nevertheless, a great film emerges despite this. Pichel and Schoedsak mount it with a wonderful melodrama. As Zaroff, Leslie Banks overacts, full of mad wild-eyed glares but the character has a magnificent presence. He is a character that draws upon the same sinister appeal as Bela Lugosi in Dracula (1931) – a mixture of leering menace, magnetic intensity and, above all, foreign sophistication. Fay Wray has been written in over the original story as a gratuitous romantic presence, nevertheless holds her part of the show up well. (Of course, she would go onto attain eternal fame starring in Ernest B. Schoedsak’s King Kong the next year).

Where The Most Dangerous Game comes into its own is when Schoedsak and Pichel take it outdoors and start into the chase. During these scenes, the film is filled with some enthralling action sequences – with Joel McCrea and Fay Wray attempting to outwit Leslie Banks with homemade defences, him unleashing his hounds, the chase through the swamps, the fistfight between McCrea and Banks, and especially the amazing climax with Joel McCrea wrestling with a hound on the edge of a waterfall. What makes it all the more exciting is that the filmmakers have clearly gone out of doors and shot on real locations, unlike almost any other jungle/exotic adventure film of the period (most notably the Tarzan series, which preferred to instead shoot in the ease of studio sets with stock or back-projected location footage to represent the jungle).

Like many other films of the Depression era, The Most Dangerous Game is fascinated with the dividing line between civilisation and barbarism. The two most famous monsters of the era – the Frankenstein monster in Frankenstein (1931) and King Kong – are what John Clute calls ‘limnal beings’, creatures that seem to stride between civilisation and the world beyond, and seem out of place in society as a result. This was perhaps a reflection of The Depression where millions had been rendered dissolute, left to wander as non-beings in the world. There is a strong sense in these films of the cosy world we know and a dividing line between the jungle outside the door.

Some films of the era – Tarzan the Ape Man (1932), Lost Horizon (1937) – see the world beyond the borderlands as holding a Utopian promise that is preferable to civilisation. Others – Dr. Jekyll and Mr. Hyde (1931), The Island of Lost Souls (1932) and The Most Dangerous Game – see beings that stride between both worlds as dangerous, as dominated by animal passions and having surrendered to lawlessness. Count Zaroff is portrayed as an aristocrat and a cultured dilettante, although his true nature is crudely foreshadowed by the giant painting on the wall as Joel McCrea is taken up to his room, like something straight off a pulp magazine cover, of a wild animal carrying a ravaged and torn woman away in its arms. As always in most of these films, The Most Dangerous Game ends with the beast vanquished and the civilised status quo restored.

Ernest B. Schoedsak also directed The Monkey’s Paw (1932) and the miniaturised people film Dr Cyclops (1940), but is most famous for King Kong. Irving Pichel is mostly known as an actor but was also a prolific director. His other films of genre interest are:– the H. Rider Haggard lost world film She (1935); the ghost drama Earthbound (1940); The Miracle of the Bells (1948) about Catholicism and miracles; the comedy Mr Peabody and the Mermaid (1948); George Pal’s The Great Rupert (1950); and the groundbreaking Destination Moon (1950), which was the first science-fiction of the great 1950s Golden Age.