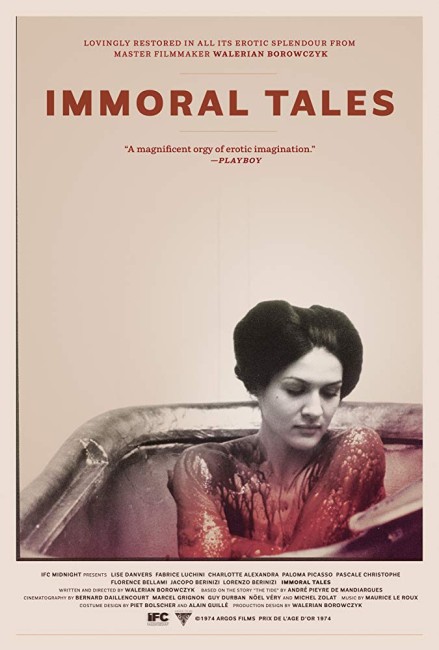 Therese Philosophie is also excellent, even though the print seen here appears to have had the rape sequence, which the episode originally culminated on, cut. Like La Maree‘s connection of surf and orgasm, Walerian Borowczyk makes a symbolic connection between divine passion and sex – with a teasing provocativeness, we see Charlotte Alexandra stroking and caressing the ornamentation in the church, the pipes of the organ and kissing a wooden doll she finds in the attic, all a little longer than is entirely innocent.

The Lucrezia Borgia segment is the weakest of the four. The episode is little more than a parade of irreverent anti-church images – a nude woman posing in papal robes, a cleric stroking an erection beneath his robes. At most, it seems to suggest the anti-church irreverence of a Luis Buñuel translated into erotica. However, the story never builds to any particular point.

Erzbet Bathory is the episode whereby Immoral Tales is usually cited in genre reviews. The segment is of course based on the 16th Century legend of the real-life Blood Countess Elizabeth Bathory who notoriously bathed in the blood of virgins in the belief that it would make her more youthful. (The Countess Bathory story is often cited as a basis for vampirism). The Countess Bathory story has inspired several other film versions – Countess Dracula (1971), Daughters of Darkness (1971), Eternal (2004), Stay Alive (2006), Metamorphosis (2007), Bathory (2008) and The Countess (2009), while the Countess also appeared as a character in Paul Naschy’s Waldemar Daninsky series. Unlike most of these other films, Walerian Borowczyk’s interpretation of the legend is non-fantastic (and in so doing is much more historically accurate to the real Countess Bathory story).

The episode is brief, nevertheless effective. Borowczyk makes striking contrast between beautifully artistically posed, almost painterly scenes of the young teenage girls lined up in the countess’s bedroom and showering, and between the countess bathing in their blood. The episode culminates in an orgy in the countess’s bedroom, through which the Countess (played by Paloma Picasso, Pablo’s daughter) moves with elegant aloofness as they tear her clothes from her, she exiting the room nude but gracefully untouched as behind her her swordsperson draws their sword and screams are overlaid. Unlike the previous segments, the erotica is tinged with a touch of nastiness, although Walerian Borowczyk is far too tasteful an eroticist too make the contrast too shocking.