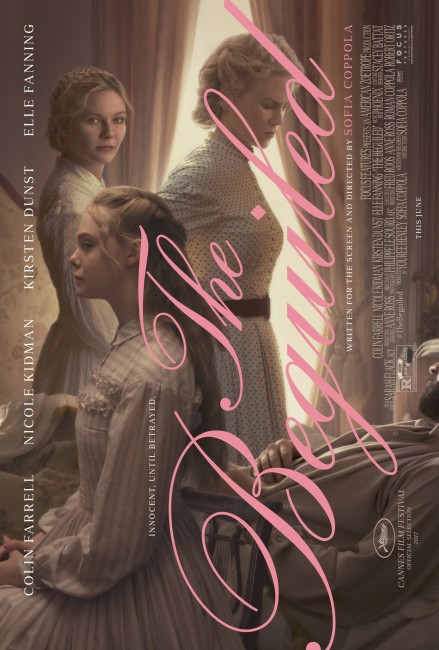 Virginia, 1864, at the height of the American Civil War. The Farnsworth Seminary, a school for girls, is kept open by the headmistress Martha Farnsworth, despite the nearness of the fighting. One of the girls finds a Union soldier, the Irish-born Corporal John McBurney, in the nearby woods and brings him back to the school. Miss Farnsworth tends his wounds and agrees to shelter McBurney there until he has recuperated and can be taken into Confederate custody. Not wanting to return to the conflict or be imprisoned, McBurney plies his charms on the girls as he makes a recovery. However, when he is found in bed with one of the girls, jealousies flare, resulting in a terrible retribution

The Beguiled (1971) was made at the time when Clint Eastwood had become a star on the basis of a series of Westerns made in Italy during the 1960s. It was directed by Donald Siegel, most well-known here for the classic alien invader film Invasion of the Body Snatchers (1956) and who put Eastwood through his most famous role in Dirty Harry (1971) nine months later the same year. Though Eastwood was a name with box-office collateral, The Beguiled was not a huge success and it took some years later for it to be rediscovered as a cult film. It is a work that is quite remarkable in its mix of Southern Gothic and brooding sexual tensions.

The remake comes from Sofia Coppola, the daughter of Francis Ford Coppola. Sofia started out making acting appearances in her father’s films beginning with The Outsiders (1983), most famously with her ridiculed performance in The Godfather Part III (1990), and has appeared in one or two other films – she even turns up as one of Natalie Portman’s handmaidens in Star Wars Episode I: The Phantom Menace (1999). Her first credit behind the camera was writing her father’s segment of the anthology New York Stories (1989). She made her directorial and writing debut with The Virgin Suicides (1999). This was followed by the highly successful Lost in Translation (2003), which saw her nominated for an Academy Award as Best Director and winning for Best Original Screenplay, and the subsequent likes of Marie Antoinette (2006), Somewhere (2010) and The Bling Ring (2013).

Sofia’s The Beguiled received reasonable acclaim when it premiered at Cannes, where she won the award for Best Director, followed by the film playing at a series of other high-profile festivals. About the only point of controversy was the fact that she wrote out the character of the African-American maid Hattie on the grounds that she felt she would not be able to do justice to the whole issue of slavery that came with it. At the same time, there was those out in the blogosphere that protested that this represented the erasure of their faces from history.

What results is two films based on the same book that feature the same characters and follow the same story in all the essential regards but also come with a distinctive difference of approach. Sofia Coppola is able to call upon a much more high-profile cast than the one Siegel had – Colin Farrell, Nicole Kidman, Kirsten Dunst, Elle Fanning – who are all fine in their roles. The accents, costuming and set dressings seem impeccably in period and the sense of Southern antebellum atmosphere is oppressively thick and redolent.

These are elements that Don Siegel never too much concerned himself about. It is this that highlights the difference between the two versions of The Beguiled – one is a costume drama fascinated with the detail and mores of the period; the other is a raw and visceral work of Southern Gothic. If there was a writer you could compare either director to, Don Siegel feels like someone in the Ernest Hemingway-esque mold making mostly man’s man films, while the nearest comparison for Sofia Coppola is surely Jane Austen and her concern with delicate matters of manners and propriety.

Sofia Coppola makes the sort of film that concerns itself with the things she is regularly interested in – the rituals among the hermetic societies of girl groups that we get in The Virgin Suicides; the fascination with the lushness and richness of period detail and dressing we get in Marie Antoinette; even arguably the theme about the foreigner in an alien culture that we had in Lost in Translation. The dialogue is tart, the performances mannered and controlled.

On the other hand, what we don’t get is the psychological games and eventual horror story that drove the Don Siegel film. Colin Farrell is much more of an expressive actor than Clint Eastwood ever was but where Siegel let us squirm in the way he saw Eastwood manipulating the girls while bedridden, all that we get here is Colin Farrell throwing in a few compliments now and again.

What the film lacks is the sense of seductive manipulativeness that the character had in the 1971 film. Indeed, Siegel sees McBurney as a diabolical force in a hornet’s nest of repressed passion whereas Sofia sees McBurney more as a force of vitality intruding into a prim and properly mannered society. In her film, it is telling that McBurney is the most engaging and sympathetic character, whereas for Siegel the sympathy was with the girls and Eastwood’s McBurney seen as a diabolical seducer.

Sofia Coppola also lacks much interest in telling The Beguiled as a Southern Gothic horror story. Here the unnervingly horrible scene where Miss Farnsworth saws off McBurney’s leg only takes place off-screen by suggestion. We hear the operation and his screams take place from the other side of the door and afterwards Colin Farrell vents his anger, accusing them of doing it to keep him there. That’s not the same as watching as she does it and the horror of us realising the real reason for doing so.

The scene where Sofia finally does get the horror inherent in the story is the climactic one where they invite Colin Farrell to dinner and feed him the poisoned mushrooms where Sofia’s fascination with the mannered politeness of period dining contrast with the horrible truth that lies beneath with some effect,