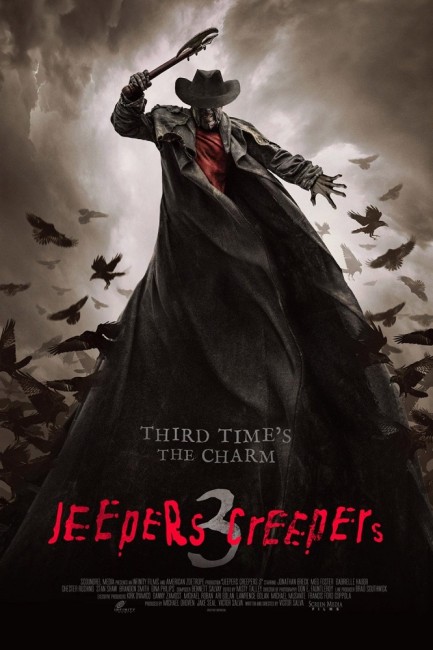 Sheriff Dan Tashtego arrives as The Creeper’s van is impounded by the police department of Poho County. However, officers are killed as the van proves to be filled with death-traps. As the van is towed away, The Creeper emerges to cut it loose and slaughter the driver. Aging Gaylen Brandon receives visions of her dead son warning her that The Creeper is returning. The Creeper begins slaughtering victims in the area. Gaylen’s granddaughter Addison Brandon is attacked and thrown in the back of The Creeper’s van. Meanwhile, Tashtego comes with a heavily armed detachment determined to track and kill The Creeper.

Jeepers Creepers 3 to be titled Jeepers Creepers: Cathedral was announced soon after Jeepers Creepers II but dithered around various scripts and announcements for some years. Even when it did open, it only played in a handful of theatres for one night only before being dumped to the Syfy Channel. In all of this, the reviews were on the negative side. That said, a further sequel Jeepers Creepers: Reborn (2022) was made without Salva’s involvement.

Victor Salva is a figure of some controversy – I am not here either to condemn nor defend him. What I don’t dispute is that he is a fine genre director and has turned in some eerie and haunting genre works. He first appeared with the greatly underrated Clownhouse (1989) and has also made the psychically gifted teen film Powder (1995), the excellent backroads psycho-thriller The Nature of the Beast (1995), the interestingly philosophical non-genre film Peaceful Warrior (2006), the stalker film Rosewood Lane (2011) and the deviltry film Dark House (2014).

Salva holds interest with an eerie opening where The Creeper’s van has been found by a sheriff’s department only for them to open it up and find it is booby-trapped with a spiked grille that comes down, followed by a spear seemingly made out of carved bone that shoots out of the exhaust pipe and impales itself through the door of a police car. The towing away of the van is interrupted by The Creeper emerging to cut it free and then eerily riding off outlined in silhouette atop the van as it appears to drive itself down a tree-filled road.

Salva fills the film with these types of unworldly images – a shot where a biker does a jump only to be snatched in mid-air by The Creeper; the arrival at the farmhouse to find a group of men taking refuge underneath vehicles, which The Creeper deals with by simply tipping a tanker over with its hands, and then tearing the door off the truck to snatch Gabrielle Haugh. The film creates these sporadic moments; on the other hand, I don’t think it approaches the other two films as effectively in terms of eeriness and spooky jumps.

With each of the Jeepers Creepers films, Salva has attempted to add something different to the mix. Here we get to go inside The Creeper’s van – which looks like an ordinary van on the inside but for the fact that it has death implements and booby traps everywhere. (Which leads to the amusing contemplation of what exactly happens when The Creeper has to go to the gas station to refuel).

The other new idea is the introduction of a heavily armed military detachment that has been sent to track and destroy The Creeper and the intriguing scenes where Meg Foster unveils a disembodied Creeper hand and people find that by touching it they can gain insight to The Creeper’s nature and origins. This being the series it is, we never actually get to find out what it is that they learn – I kind of also expected something here where they track its whereabouts, not unakin to the way they follow Dracula using a hypnotised Mina in the concluding chapters of Bram Stoker’s Dracula (1897).

The final scenes of the film [PLOT SPOIERS] contain shout-outs that tie up to the previous two films as we see Chester Rushing boarding a school bus with the implication that it is the same one in Jeepers Creepers II, while the final scene features an appearance from Gina Phillips reprising her role as Trish Jenner from the first film as she swears to track down and kill the creature.