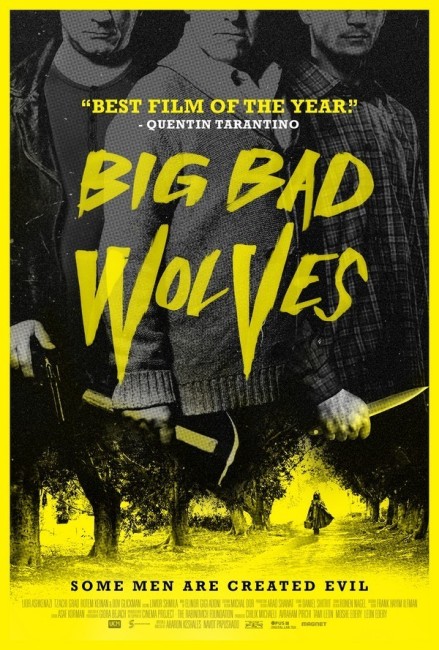 Police detectives grab Dror, a schoolteacher they believe is guilty of sadistically torturing and killing several children, and beat him to try and get a confession. They are forced to let him go because they have no evidence against him. One detective, Mickey, continues to follow Dror, certain of his guilt. After finding that the beating was secretly filmed by a kid and uploaded to YouTube, Mickey is suspended from the force. He then abducts Dror, taking him to the woods and making him dig a grave. Dror is saved by Gidi, a man who has been following Mickey, only for Gidi to knock out both Dror and Mickey and take them to the house he has purchased in a remote part of the country. He explains to Mickey that he is the father of one of the murdered girls. He intends to torture Dror until he tells where his daughter’s severed head is buried. Mickey agrees to be his accomplice. In the cellar, Gidi methodically begins pulling out Dror’s nails and breaking his fingers. All the while Dror protests his innocence.

Big Bad Wolves was sold at the Vancouver International Film Festival as an Israeli serial killer thriller. with no particular expectations. Certainly, the film had been getting some good reviews in genre press. It was the second film for Aharon Keshales and Navot Papushado who had previously made Rabies (2010), which was sold as Israel’s first horror film.

The first fifteen minutes of the film seem nothing out of the ordinary. It felt exactly like an Israeli film trying to mimic a hard-boiled American cop thriller. It stirs all the tropes of the genre – macho cops who do the dirty work while trading flip banter, their bending the rules out of shape in order to hound and beat someone they know is guilty, they constantly defying the system that tries to reign them in. Certainly, Aharon Keshales and Navot Papushado manage to keep a good line in running humour throughout these scenes but Big Bad Wolves seems to be shaping up as a generic film.

From the initial scenes, you suspect that Big Bad Wolves is a serial killer thriller/police procedural that is going in fairly predictable directions – the police harassing a suspect (Rotam Keinan) who appears to be innocent; while what appears to be the real killer (Tzahi Grad) prepares a house in the middle of nowhere, first making sure that it has a cellar where no screams can be heard; the cop (Lior Ashkenazi) thrown off the force for breaking the rules and determined to still pursue the suspect.

About half-an-hour in, Big Bad Wolves starts to get interesting. This is the point when Tzahi Grad abducts both suspect Rotam Keinan and cop Lior Ashkenazi, while tying Keinan up in the cellar. He then enlists Ashkenazi’s help in torturing Keinan to get the whereabouts of his daughter’s severed head, casually stating that the job needs “the one thing a maniac is scared of is – another maniac.” It is here that Big Bad Wolves starts to head into a perversely entertaining directions as we watch the two of them, principally the alarmingly intense Tzahi Grad, torturing Rotam Keinan, who could not otherwise look the ideal picture of harmless ineffectuality.

The surprise about the film is just how closely it resembles the mainstream-released Hugh Jackman-Jake Gyllenhaal Prisoners (2013), which I only saw two weeks before Big Bad Wolves. Both films have a near-identical plot that involves a distraught father taking the law into his own hands when the police investigation runs short and the prime suspect has to be released for lack of evidence. Both films then have the father imprisoning and torturing the suspect to get information based on very scanty evidence of the man’s guilt. Both vie in places of uncertainty between whether the suspect is guilty or not and pile a series of unexpected twists onto this. Both films seem to be wanting to make a point about the big topic issue of the validity of torture – the question of its legitimacy and the extent to which those implementing it are doing so based on any clear certainty.

Just like in Aharon Keshales and Navot Papushado’s previous film Rabies, the film comes with a series of whiplash twists that are constantly turning everything on its head, nowhere more so than the last few minutes and an ending that makes you gasp. Often the film leaves your head spinning as characters abruptly shift sides and back again, such that you are never sure which character in the film you are meant to be rooting for – Lior Ashkenazi’s cop sort of inherits the good guy role by default but then you remember he was just as equally prepared to shoot and bury the suspect in the woods earlier in the show.

The performances of all are exceptional, especially the coldly forceful Tzahi Grad and Dov Glickman as his equally alarming father who makes an abrupt jump from reaction of shock to join his son and devise even more extreme tortures.

The thing that interested me about Big Bad Wolves was the extent to which it would adapt and use the serial killer thriller, whether it would simply copy American models or imprint it with its own cultural stamp. The one issue that invariably does stamp itself on the film is the highly contentious elephant in the room of Israeli-Palestinian relations. This is something that emerges in interesting ways. When Tzahi Grad buys his house in the countryside, you do a double-take at some of the comments are casually passed off like the realtor saying “It’s surrounded by Arab villages so it’s very cheap” and people expressing concern about the dangers of being surrounded by Arab villages. The most intriguing character is that of the man on a horseback (Kais Nashif) who shares a cigarette with Tzahi Grad and later lends Lior Ashkenazi a cellphone. This is a character who seems designed solely to defy cliches and where both the Israeli characters are seen to be having to take a step back from their prejudices and assumptions about what he represents to deal with him.

Aharon Keshales and Navot Papushado next went onto make the F is for Falling segment of ABCs of Death 2 (2014), while Aharon Keshasles went solo for the US-made revenge film span class=”filmref”> South of Heaven (2021).