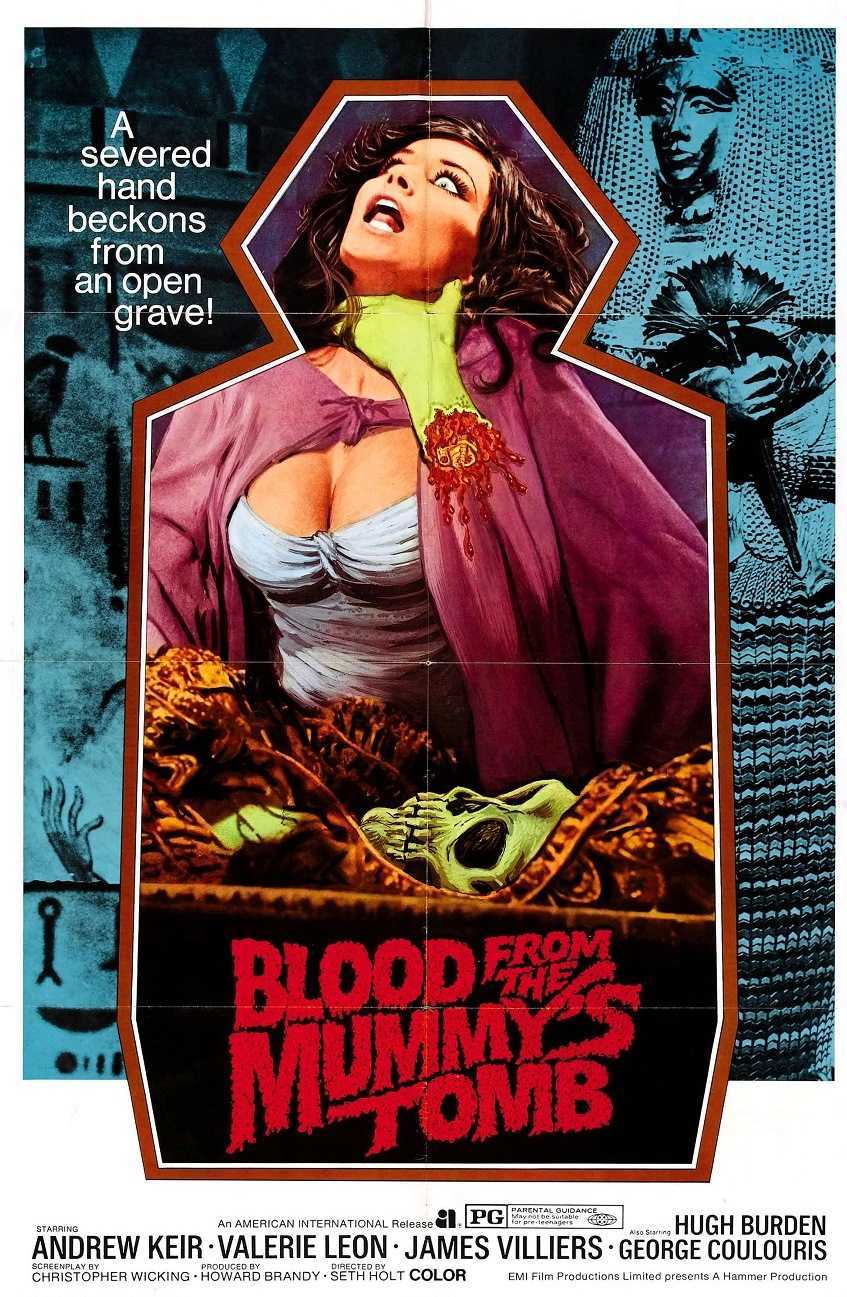 Egyptologist Julian Fuchs gives his daughter Margaret a red ring for her birthday. Unknown to Margaret, the ring has been taken from the tomb of the Ancient Egyptian queen Tera who was executed for practicing black sorcery. Margaret and her boyfriend Tod Browning discover that Fuchs keeps Tera’s perfectly preserved body locked in the cellar. From her sarcophagus, Tera begins to exert influence over Margaret, who was born at exactly the same moment that Fuchs uncovered the tomb. Via her control of Margaret and by sending out her own severed hand, Tera begins to kill the members of Fuchs’s expedition in order to get back the artifacts she needs to complete her resurrection and then be able to possess Margaret’s body.

Blood from the Mummy’s Tomb is one of the more contentious efforts from the latter days of Hammer Films. It has a number of champions, as many detractors and almost all agree that it is a flawed work. Part of the problem with the film is that it had a deeply troubled production history. It was begun by Seth Holt, who had directed several of Hammer’s other films, in particular the psycho-thrillers A Taste of Fear/Scream of Fear/ (1961) and The Nanny (1965).

Seth Holt began shooting with Peter Cushing in the role of Professor Fuchs. However, Cushing’s muchly beloved wife Helen was taken into hospital after one day of shooting and Cushing dropped out of the production to be by her side, whereupon he was replaced by Andrew Keir. Holt continued shooting, only to die unexpectedly three weeks later. The production was then hurriedly taken over and completed by Hammer producer Michael Carreras. Unfortunately for Carreras, Seth Holt had departed from the text of Christopher Wicking’s screenplay considerably and what completed footage there was proved to be confusing. The result was finally released and probably emerged as a better film than it had any right to be in the circumstances.

Hammer had made various mummy films before – most notably Terence Fisher’s excellent The Mummy (1959) and the more routine likes of The Curse of the Mummy’s Tomb (1964) and The Mummy’s Shroud (1967). Blood from the Mummy’s Tomb was envisioned as a different kind of mummy movie, one that eschewed the shuffling bandage-enwrapped title creature, which had become a dreary figure through the Universal Mummy sequels of the 1940s. Here Hammer sought to go back more to the eerie supernatural horror of Universal’s original The Mummy (1932). To this end, they turned to The Jewel of the Seven Stars (1917), a novel by Dracula (1897) author Bram Stoker, a largely pedestrian work that has nevertheless proven surprisingly popular as a film subject (see below for other versions). It was an intriguing attempt to make a different kind of mummy film, even if it is not entirely a successful one.

Blood from the Mummy’s Tomb is an uneven film. There is a fine atmospheric opening – a near-naked woman (Valerie Leon) is entombed by priests amid arcane Ancient Egyptian rites; her hand is chopped off and thrown to the hyenas but crawls away; a mystery wind pops up and the priests fall to the ground with their throats gored, all of which proves to be a dream being had by Fuchs’s daughter Margaret (also played by Valerie Leon) in the present-day. It is certainly the best scene in the film. Elsewhere Seth Holt (and Michael Carreras) conjure an adequate, if not standout, atmosphere.

The film feels cramped in terms of budget – it only takes place around two houses and there are no Egyptian exteriors, apart from a single scene set along the side of a pyramid. That said, the sets and dressings are lavish and colourful. However, Seth Holt is not the most vibrant of Hammer directors and never mounts the film with the floridness of a Terence Fisher or even a Freddie Francis – the scene where Tod’s car crashes looks particularly unconvincing. On the whole though, the behind-the-scenes production problems never show through – certainly, one would not guess that the film had anything other than a normal production history without having read about the problems.

For a role that was originally to have been played by one of Hammer’s top stars, Peter Cushing, the character of Fuchs’s father/professor is surprisingly sidelined for almost the greater part of the film. That leaves the bulk of the rest of the show to be carried by a suitably supercilious James Villiers and Valerie Leon. Unfortunately, Valerie Leon is not the right person for the part. She has clearly been chosen for an impressively front-heavy figure rather than anything else. In the part, she radiates a blankness and little in the way of Tera’s supposed sinister mysteriousness.

Subsequent versions of The Jewel of the Seven Stars are the underrated, big-budget The Awakening (1980) and the cheap Bram Stoker’s Legend of the Mummy (1997).