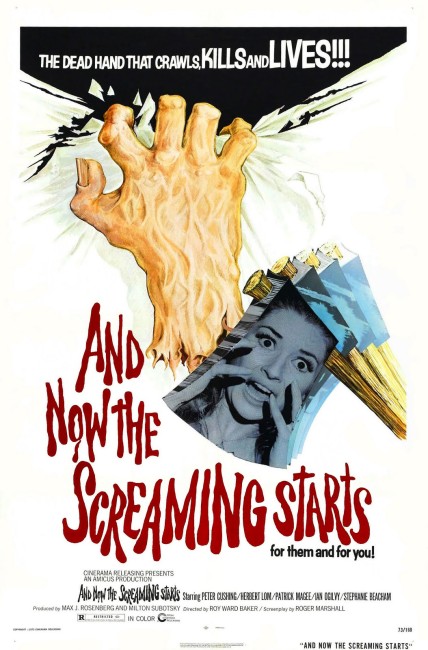 Newlywed bride Catherine Fengriffen joins her husband Charles on his ancestral family estate. Catherine has barely settled in than she is being disturbed by visions of a disembodied hand and a man whose eyes have been gouged out. However, nobody else is able to see these visions, even as the disembodied hand starts to cause the deaths of others in the household. As Catherine’s sanity begins to fray, Charles brings in the psychologist Dr Pope. Pope digs into the past and comes to believe that the Fengriffen line has been cursed as the result of a terrible act that Charles’s 18th Century ancestor Henry visited upon a manservant on his wedding night.

In the 1960s and early 1970s, Amicus Pictures, under producers Milton Subotsky and Max J. Rosenberg, became the most successful of the English companies that were seeking to exploit the boom in horror that had been created by Hammer Films. Amicus’s trademark became the horror anthology with films such as Dr Terror’s House of Horrors (1965), Torture Garden (1967), Asylum (1972), Tales from the Crypt (1972) and others, although they also made various psycho-thrillers and ventures into science-fiction.

… And Now the Screaming Starts! was Amicus’s attempt to make a haunted house story, which was surprisingly one major horror theme that had never been touched by Hammer. Unfortunately, they handed direction over to Roy Ward Baker. Baker was a director who had made several films at Hammer – ranging from Quatermass and the Pit/Five Million Years to Earth (1967) to Moon Zero Two (1969), The Vampire Lovers (1970), Scars of Dracula (1971), Dr Jekyll and Sister Hyde (1971) and Legend of the 7 Golden Vampires (1974) – and several for Amicus – Asylum and The Vault of Horror (1973) and Subotsky’s post-Amicus anthology The Monster Club (1980). Although several of these are reasonable films, Roy Ward Baker was on the whole not one of Anglo-horror’s most subtle directors.

… And Now the Screaming Starts! is a film where Roy Ward Baker is constantly bombarding us with lurid shock effect. We have barely arrived at the house five minutes into the film than we get crude jolt effects with hands popping out of portraits. Thereafter, Baker gives a whole kitchen sink of crawling hands, lurking eyeless figures, sinister retainers popping up from behind graves, the husband turning up with bloodied hands, superimposed hands reaching for maids and causing them to fall down the stairs and so on. There is not a great deal of subtlety to any of it.

A far more interesting approached to the material might have been akin to the one taken The Innocents (1961) that let everything hover in an ambiguous place as to whether Stephanie Beacham was imagining it all or not. Baker contrarily spells it all out with thudding over-emphasis and leaves nothing to the imagination.

… And Now the Screaming Starts! was one of several Anglo-horror films of the early 1970s, alongside others like The Creeping Flesh (1973) and Hammer’s Demons of the Mind (1972), which contrasted Hammer horror with Victorian-era psychology. The way David Case’s original novel Fengriffen (1971) was written was as a Victorian era mystery with a psychologist seeking to find an explanation for the supernatural events. By contrast, the film stretches the story of the book out and places all the emphasis on the supernatural. The film is nearly half over before it gets past the generic haunted house element with Stephanie Beacham being scared to arrive at the main part of the story. In the book, for instance, Peter Cushing’s Dr Pope is the first-person narrator; in the film by contrast, he does not enter until the halfway point.

Alas, when the film finally does arrive at the scenes that depict the supposedly horrific acts of Fengriffen’s ancestor, Roy Ward Baker befalls a critical tameness of spirit. The rape is barely even shown, the woman being seen no further naked than a brief glimpse of a bare bottom as she runs from the bath, and the hand severing effect is a weak and unconvincing effect.

In terms of shock for the era, this is extraordinarily tame, much tamer than most other Hammer films of the time – one should note by contrast that … And Now the Screaming Starts! came out the same year as The Exorcist (1973) and a year after the savage brutalities of Wes Craven’s The Last House on the Left (1972). Moreover, for the inter-generational supernatural vengeance that ends up being sworn by such an incident, the way the scene is presented on screen by Baker fails to leave one moved or feel anything other than to regard it as merely another lurid shock. It should have been the horrific highlight of the film.

Herbert Lom is miscast in the role of the ancestor – he seems far too Teutonic and tightly bound to make for a convincingly debaucherous libertine. The film arrives at a dramatically wimped-out non-ending with Stephanie Beacham’s baby being born, whereupon the film fades out on a Biblical quote about vengeance.