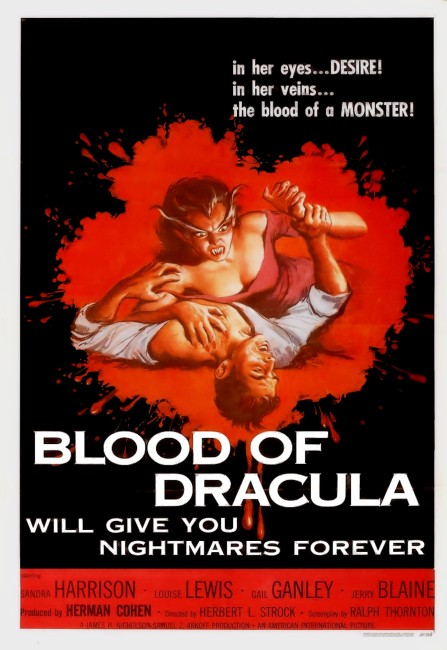 After rebelling over her father’s decision to remarry only six weeks after the death of her mother, teenager Nancy Perkins is placed in a girl’s boarding school. There she meets the chemistry teacher Miss Branding who is obsessed with proving herself in a man’s world. Miss Branding is conducting experiments to show that there is deadly force within every human. She selects Nancy as a subject because of her latent anger. Using a Carpathian artifact, she hypnotises Nancy and causes her to turn into a vampire.

During the 1950s, producer Herman Cohen had great success with I Was a Teenage Werewolf (1957), which he quickly followed with I Was a Teenage Frankenstein (1957). In both of these, Herman Cohen revamped classic monster movie themes for 1950s contemporary teen audiences, setting them among the rock’n’roll and James Dean generation. (Blood of Dracula even stops at one point for a bizarre rock’n’roll number choreographed with girls dancing with pillows).

Blood of Dracula is the least interesting of Herman Cohen’s teenage monster trilogy. Pointedly it is only a rehash of I Was a Teenage Werewolf. The plots of both films are almost identical – a rebellious teen with anger and authority problems comes under the influence of a scientist who chooses them because of their anger – “We must find a girl with natural fire, an explosiveness close to the surface” – and then hypnotically regresses them, allowing a monster to emerge and go on a rampage. In fact, the monster here even seems far more werewolf than vampire. The creature is a hairy monster that emerges out of anger and there is little in the way of the trappings associated with the vampire film – we never, for instance, see Sandra Harrison ever engaged in blood drinking.

Blood of Dracula sits, as the other Herman Cohen teenage monster movies do, atop the growing rift between teenagers and adults that emerged into the open in the 1950s, the sense of resentment, of being suppressed and misunderstood by adults that people like Elvis Presley and James Dean were tapping into. The film also interestingly introduces a proto-feminist theme – the woman scientist is acting out of a driven need to assert herself in a male dominated world and prove men wrong. Although ultimately, the film ends on a conservative anti-women message, leaving us with the sense that women who try to rise above their station invariably become unbalanced.