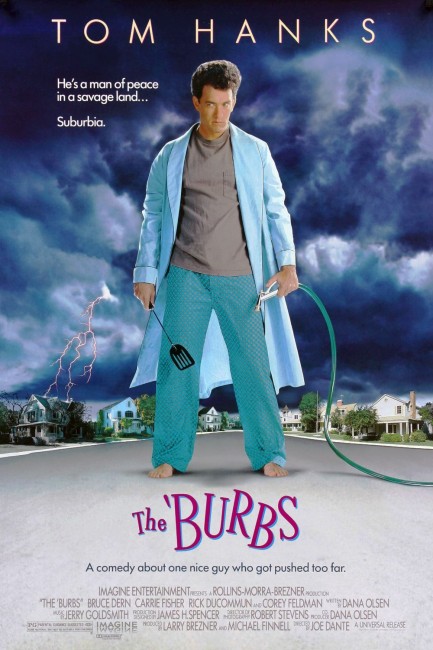 While at home on holiday, Ray Peterson is drawn in as the rest of his neighbourhood speculatess about the mysterious goings-on of the sinister Klopeks who have just moved in on the street. When one of the neighbours inexplicably disappears, the Klopeks are suspected of everything from cannibalism to witchcraft.

Director Joe Dante is a born B movie fan. In the 1960s, he submitted articles to the seminal Famous Monsters of Filmland (1958-82) before breaking through as a director with jokey genre in-referential films like Piranha (1978) and The Howling (1981). Dante had a big hit with Gremlins (1984). Since then Dante’s career has been erratic. He has made several attempts to break through with films that were more than extended in-jokes – Explorers (1985) and Matinee (1993) – but most of his films – Innerspace (1987), Amazon Women on the Moon (1987), Gremlins 2: The New Batch (1990) – still end up as being the same old series of nods and winks to genre fans. With The ‘Burbs, Dante tried to do a little more but never quite succeeded there either.

The ‘Burbs starts well with Dante parodying mentor Steven Spielberg’s comic use of the Paramount mountain logo in the opening shots of the Indiana Jones films – here Dante dissolves from the Universal Studios logo of the Earth into an Industrial Light and Magic-created shot of the Earth from space, which then zooms down through the exosphere to close in on the neighbourhood. Yet for all the cleverness of the shot, the rest of The ‘Burbs remains a disappointment. (Although to be fair to it, there is a certain critical kickback that has tried to reappraise its merits after its critical nosedive upon its maiden cinematic release).

There is a satiric idea at the heart of Dana Olsen’s script but Dante lacks a forceful enough drive to make it without gracelessly blundering about quick-drop tv sitcom slapstick and a series of caricatures pitched at an abrasively shrill level of hysteria. The end turnabout where the neighbourhood is seen as having become exactly what it originally considered antisocial is a point that should need no lecturing to make but Dante and Dana Olsen hammer it home without subtlety.

However, the script’s final attempt to eat its cake too by confirming all the paranoias and suspicions and showing that the Klopeks are exactly what they have been accused of all along defeats the satire. It is as though Dante, in having abandoned his low-budget zest by entering the Spielberg stables (and here working for Ron Howard’s Imagine Entertainment production company), has bought into the dumbed-down anti-intellectualism of mainstream American sitcom thinking and is unable to produce a black comedy that leaves an audience unsettled without having to turn around and reaffirm traditional values.