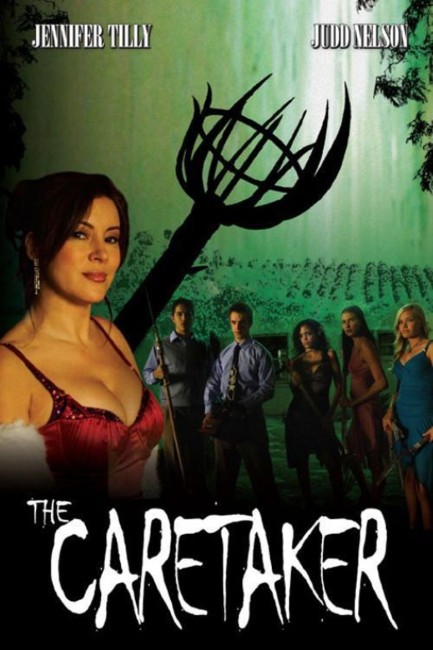 Three guys pick up their respective dates in a limo, ostensibly to take them to a school Halloween dance. Instead, they have organised to drive out to a deserted grapefruit farm. They take the girls into the abandoned house where they tell the story of the caretaker Adam who used to live there and how he became insanely jealous of his wife Tansy and kept her manacled up. The guys have arranged for a friend to make noises to scare the girls. However, they then find a dead body in one of the rooms. As a hooded figure starts stalking them, it becomes apparent that this is not a Halloween prank.

The Caretaker is a slasher film, independently produced by a group of newcomers. The basic plot set-up is surprisingly reminiscent of Hell Night (1981) – a slasher from the classic heyday where a group of university pledges spend the night in a house with a sinister past where attempts are made to spook them, only for the real thing to turn up and start pursuing them, leaving people unable to know what is real and what is part of the prank.

The Caretaker sits just between effectively transcending the slasher model and rehashing its formula. The group of teenagers it casts as its line-up of victims is certainly more well rounded the most of the characters in these films. The actors have all rehearsed together, play well and the lines come with an occasionally acerbic and amusing bite. On the other hand, The Caretaker is never as wittily knowing about the slasher genre and its cliches as Wes Craven’s Scream (1996).

The stalker theatrics are all average – competent but nothing that truly stands out. The film takes some time to get past the long extended intro with the trip up the house and the telling of the story to the part where the victims start getting stalked. Certainly, director Bryce Fridrik Olson achieves his best moments during the telling of the spooky story, which is constantly being interrupted by mundane questions or the guys being jerks and then adroitly flows back into mood without a moment’s pause. On the other hand, not enough is made of the play between faked Halloween scares and the real thing, despite the film having the perfect set-up for it.

Alas the point that The Caretaker shoots itself in the foot is when its big name star Jennifer Tilly turns up. Tilly has taken on some amazingly trashy roles in recent years – see her extraordinarily self-deprecating performance in Seed of Chucky (2004). Here Tilly, outfitted in a dress designed to maximize her impressive cleavage, is allowed her head and goes for broke. She has a series of scenes going on about wanting to have sex with a student while someone else films it so as to become famous or proposing dating the serial killer before getting her throat slit, where she gives the impression that she had ad libbed most of her dialogue. Unfortunately, her presence throws the tone of the film off. She pushes a film that had up until that point taken itself relatively seriously over into camp territory. It is as though for two-thirds of the film, The Caretaker had been taking its horror generally seriously, before its star came along and by refusing to take any of it seriously pushed everything in a totally different direction.

The other star name Judd Nelson gives a more effectively serious and convincing performance, although his appearance is only kept to two minor scenes. Jonathan Breck, who has accrued a number of genre roles and is touted as a horror actor on the basis of having played The Creeper in Jeepers Creepers (2001) and sequel, has an interestingly odd part as a creepy limo driver. The twist ending revelation of the killer’s identity is modestly effective if far-fetched.

One other minus point is the supposed Sinister House of the show. Clearly the filmmakers were unable to obtain a big gloomy mansion or even a double-storey house and have to make do with an unimposingly ordinary single-storey suburban home – it is the sort of location where any decent attempt by a victim to run from the masked attacker would take about 30 seconds to get from one end of the house to the other.