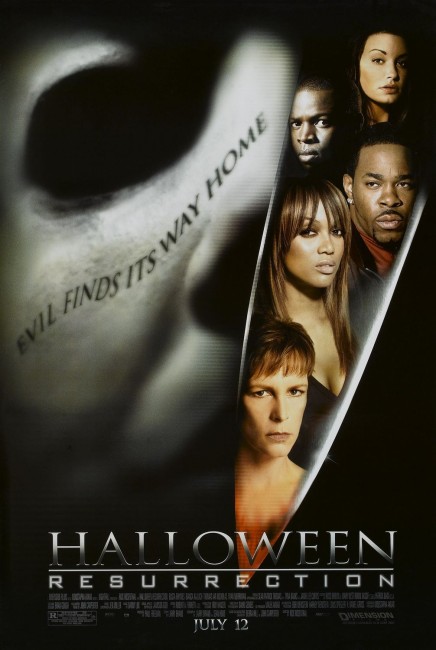 It is three years after Laurie Strode killed Michael Myers. She has been placed in a psychiatric institution after it was discovered that she beheaded the wrong person. Michael now enters the asylum and kills her. In Haddonfield, Sara Moyer is one of six students selected by promoter Fred Harris to spend a night in the Myers house in an attempt to discover what made Michael evil as a promotional stunt for his dangertainment.com website. The group then discover that Michael is also in the house. As the participants start to be slaughtered, the others are no longer sure what is real and what has been set up by Harris.

Halloween: Resurrection is the eighth in the series of films that began with John Carpenter’s Halloween (1978). (See below for the other Halloween films). John Carpenter had long since dissociated himself from having anything to do with the series (after the third entry) and all the sequels have been produced by Moustapha Akkad. Halloween: Resurrection does bring back Jamie Lee Curtis who avowed not to have anything more to do with slasher movies after Halloween II (1981) – although one can clearly see that her reason for signing on this time was to kill the character of Laurie Strode off. Also back on board is director Rick Rosenthal who directed Halloween II and here becomes the only director (up until the remake series with Rob Zombie) to sign onto the series twice.

By now a sense of ennui has well and truly set into the Halloween series. In a bid for some kind of novelty, this entry sees the series looking around and taking on board ideas from its contemporaries. It borrows from The Blair Witch Project (1999) and its novel use of handheld video camera (something that proves excruciating on the eyes on the big screen in the constant cutting back and forward between film stock and blown up, handheld video).

It also manages to wind in the fascination with the modern telecommunications revolution, with a number of plot devices dependent on webcams, e-mail relationships, even a climactic rescue involving messages transmitted by palmpilot. It also borrows from Scream (1996) and its fad for deconstructed slasher movies, writing in a critical theorist as a character and making some intriguing speculations at the outset about how Michael is representative of a Jungian ‘shadow’.

There a number of references to other films – the asylum scenes and Jamie Lee Curtis’s character are strongly reminiscent of the similar scenes and Linda Hamilton’s transformation in Terminator 2: Judgment Day (1991), while Michael’s murder with a camera tripod has clearly been borrowed from Peeping Tom (1960). Although, the greatest ingenuity that the film offers is its premise that is a take on the current 00’s fad for reality tv shows – Survivor, Big Brother, Temptation Island et al – and the novel winding in of this into a slasher film.

But for all its employment of handheld camerawork, for all its nod toward slasher movie deconstructions, Halloween: Resurrection is still the same old Halloween sequel formula. Other than a few scenes with Michael sneaking up on people being sent across the web, the reality tv scenario fails to be used in any novel way; and for all the attempt to analyse Michael in terms of critical/psychological theory and the idea of a broadcast that sets out to explain what made him who he is, none of these questions are ever dwelt upon again beyond their initial mention, let alone answered.

Rick Rosenthal fails to do anything other than develop rudimentary by-the-book scare and gore tactics. The film’s eeriest moment is one where we see two Michael’s, one real, one fake, following each other through the house – but this is the only moment the film comes near approximating anything of the suspense that John Carpenter did in the original. Rosenthal fails to even play the real horrors vs faked tv show set-ups off each other in any interesting way.

Busta Rhymes gives a totally overacted performance – his anti-media remonstration that closes the film is just ludicrous posturing that one cannot take the slightest bit seriously. A much more successful integration of the reality tv concept into a horror movie could be found in the same year’s excellent My Little Eye (2002).